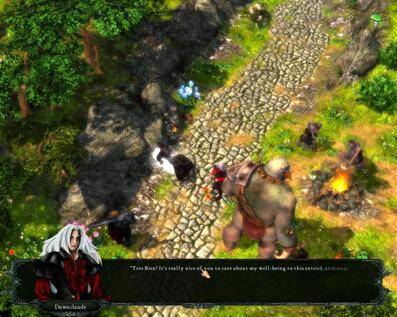 Grotesque Tactics: Evil Heroes is an ironic, story intensive fantasy RPG with tactical elements. It’s a refreshing mix of elements from both western and Asian RPGs which can be compared to tactical RPGs like Kings Bounty, Fire Emblem, Final Fantasy Tactics, Fallout 2 and Jagged Alliance. Grotesque Tactics is an attempt to spoof an often-parodied genre. As Tactics games go, it has some pretty serious flaws, and the heavy-handed attempts at humorous social commentary ultimately do more harm than good.

The game starts off with lengthy discussions between the lead characters. Drake is a miserable emo kid who has failed his courses at soldier academy, thus ensuring that he will never become a hero. Before he can end his personal misery by running himself through, he encounters the Holy Avatar, survivor of a great ongoing conflict who convinces Drake that there is glory to be found in the coming battles, and maidens to rescue. Traveling harems don’t start themselves!

Anyone wanting an explanation of how the battle system works can opt to have the basics explained in the ensuing conversations. Even if you choose to opt out, you’ll face a heavily padded dialogue exchange before you get a chance to test out your new-found knowledge. The chatter is made less bearable by the constant panning and centering of the camera as it locks on to whoever is “speaking” before you can click to the next block of speech. As it turns out, you can right click to skip dialogues, but that isn’t revealed until you arrive at the first (and only) village.

After clearing your first area, you are magically whisked away to your first town, where you acquire your first set of “get me these” and “rescue this guy” missions. Talk to Holy once you are ready to do battle again, and you’ll be magically whisked away to the next part of the game. Complete the objectives, and the big Holy A ships you off to the next area. The boundaries of the areas you are confined to aren’t always obvious, and don’t make a lot of sense. In many cases, you can run endlessly up against an invisible wall, despite the map screen being completely open. It almost seems as if there were originally plans to link up all the roads, only to abandon it for the on-rails warping technique. Searching for hidden treasures is a highly streamlined affair: anytime you don’t see a token glowing chest, click on the “find” icon, and your party will dash to wherever the nearest treasure is, secret or no. Despite the word “tactics” in the title, there aren’t many tactics to employ on the battlefield save for your few types of available attacks. Having played several other “tactics”-type games, I instinctively ran around to the back of my opponent to unleash additional damage. No dice! As soon as the attack animation was initiated, my enemy turned around to face me, and the strike was treated the same as a head-on shot. The same can be said for flanking strikes.

As your characters level up, they can unleash more advanced attacks, but even these are a mixed bag. Archers (the “maidens” you rescue) possess one measly additional square of range, and gaining elevation doesn’t change this a lick. Take into account their sad armor class rating, and using the archers at all becomes a lousy tactic as they will become sitting ducks to any foe they damage but don’t manage to kill.

“Obsession” moves are employed when the character does enough damage to fill a status bar, but these generally do as much damage to the party as they do to nearby enemies. So basically, you’re left with attack, heal party members, and unpredictable fancy attack. To me, it hardly seems all that tactical.

It’s also really hard to set up a strategy when your teammates randomly forget to follow you. In more than one instance, I would engage in a battle only to discover that one of my maidens was half a screen away. In other cases, three or four rounds would elapse before one of my characters would get a chance to move or attack, despite his presence in the middle of the ongoing skirmish. He could take hits, but he wasn’t given a chance to retaliate until it was almost too late.

She Ain’t Pretty. She Don’t Even Look That Way.

The graphics and character models are a mixed bag at best. While Drake and The Holy Avatar both seem to have had a considerable amount of attention put into their model design, the maidens look like Bratz dolls wearing less makeup and squeezed at the midriff. The animation in general is clunky and awkward. Most times, after selecting a move, the character will perform a bizarre three-quarters hover turn in the opposite direction before running off to complete the desired move. The “critical miss” animations are at least humorous, employing over-the-top anime exasperation and slapstick prat-falls.

The maidens are all portrayed as wide-eyed, simplistic, ego-driven bimbos clad in tattered rags. Want to get them a new outfit at the armor shop? Yeah…more tattered rags. They giggle and bounce. They squabble amongst each other for the affections of the Holy Avatar. When the Holy one takes enough damage, the maidens will launch a perfectly random attack at anyone nearby, be they friend or foe.

There are anime and manga titles that don’t always hold women under the most flattering of lights. I get that. I think at its most innocent level, this game is meant to be a send-up of this flavor of portraying female characters. However, there is a delicate line between satire and tastelessness; this game defiantly straddles this line, and gives its best O-face (and she’s totally faking it). At times it felt like I was in a bad LARP session with the PG-13 version of a Girls Gone Wild video playing in the background.

It also prevents any of the other characters from being remotely likable. Drake is gloomy. He pouts and makes snide comments. The Holy Avatar is conceited. He is most often talking about himself in the third-person. The goblin thief talks with Zs in words that don’t normally have Zs in them. Female characters are either completely ditzy, or lippy anger management cases. There isn’t depth enough to drown a kitten (oh, back off! Drowning kittens is the kind of thing real Evil Heroes would do).

Given the lack of actual tactics in battles and the on-rails feel of traveling between missions, it’s hard to think of this game being compared to a title like Final Fantasy Tactics (one of my all time favorite games). When layered with a story that won’t stop reminding you that the half-naked women are sex-starved idiots, it quickly becomes hard to tolerate. The flawed AI mechanics are just salt in the wound.