The trailer for the prologue / first installment of Winter Voices from developer Beyond the Pillars seemed really interesting. It was dark and foreboding. The artwork had a great hand-drawn, almost watercolor, look to it with effects that perfectly complimented. Oddly, it didn’t seem to show any gameplay, so it gave me the impression that perhaps it was a point and click adventure. Well, I guess most of my impressions were wrong. Winter Voice Prologue – What We Think:

Winter Voices: Avalanche is the story of a young woman returning to the village in which she was raised to deal with her very ill father. Shadows of doubt and mystery swirl about her as she re-familiarizes herself with a village she thought she’d left in the past and a father she never really knew.

Initially, Winter Voices plays much like a point-and-click graphical adventure (King’s Quest, Monkey Island, Kyrandia – you know what I’m talking about). You wander about and interact with the people and things in your environment. When it comes to combat, Avalanche switches to a turn-based tactical RPG (Final Fantasy Tactics, Shining Force…again, you know).

Visually, the backgrounds are beautiful. For an independent game some serious care and talent went into making the stark atmosphere of Winter Voices. The soundtrack is also top notch in adding to the effect of weary lonesomeness. Well, frankly, what it isn’t is interesting. This is a story steeped in dialog. Dialog that’s almost strictly text based. Your father has essentially the only voiceover in the game. This would be fine except the dialog is painfully dull. It is chock full of purple prose and psychobabble. It is also in great need of an editor. Wrong words, misspellings and grammatical errors abound. I know no one is perfect and, with the amount of text here and the fact that it needed to be translated, there were bound to be errors, but here they are excessive.

The gameplay is equally underwhelming. Walking around is too slow. Getting from boring conversation to boring conversation shouldn’t take this long. The character animation for all this walking also suffers from that stiff, pickle-up-the-butt look. When you see combat you get into that square-grid move-and-act mode. Enemies range from a shadowy blob to…a shadowy blob. There are occasional additions, but they are few and far between. Combat generally revolves around you running away from or surviving a number of turns against these shapeless manifestations of your fears. There are a few more puzzle-like battles, but, again, they are rare indeed. While the background graphics are wonderful, the character art leaves much to be desired. It immediately made me think of a high-school anime fan’s sketch book. It would almost be acceptable though, if it didn’t have to stand in contrast to the rest of the game. The music also falls short, this time not due to its quality, but from lack of variety. It’s repetitive enough that you’re likely to turn it off after a while. If I hadn’t been reviewing this, I probably would have stopped playing after the first half an hour. It’s too bad, because Winter Voices had such promise. Attempting a seven-part story is commendable, but I’m not sure this will find enough an audience to see it through to a conclusion. Visuals and audio don’t carry clunky mechanics and stilted dialog.

Get Winter Voices Prologue: Avalanche now at the Steam store 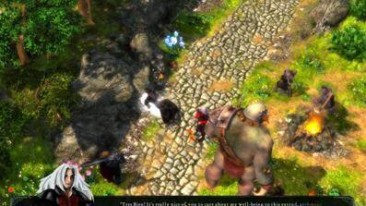 Review: AlternativA – Point & Click through a Good Looking Dystopia, So What’s the Problem?