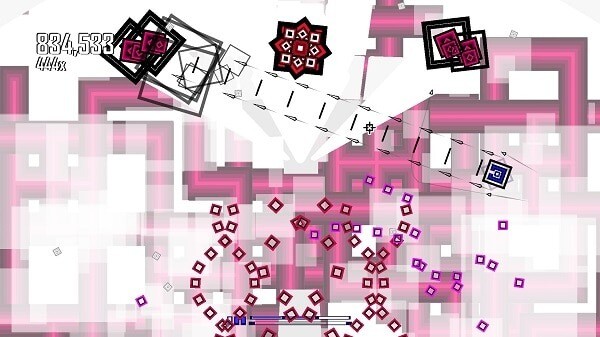 Zenzizenzic is the first game from Dutch developer Ruud Koorevaar. Luckily for Koorevaar (and the rest of us), it’s been picked up and promoted by Adult Swim Games. So what’s the fuss about? In purely mechanical terms, it’s a pretty standard twin-stick shooter. But there’s tons more to it than the basic mechanics would suggest. 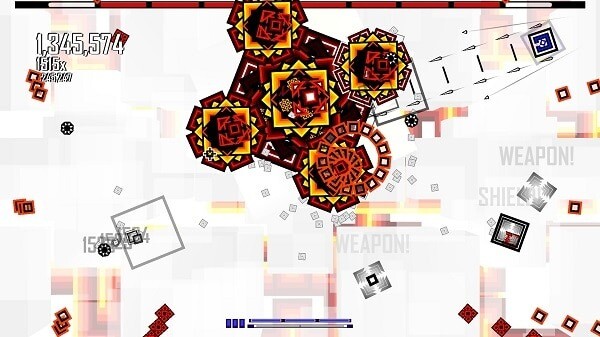 Hip to Be Square

For starters, there’s the art. Zenzizenzic takes a highly abstract approach, with everything being generated from squares (the game’s title is actually an archaic mathematical term for a number’s eighth power, or the square of its square). Your “ship” is a tiny, primary colored square, open at one end to indicate the “front,” while enemies are various neon-colored, fractal-like assemblages of squares. Power-ups are rendered in soft gray tones, making them easy to distinguish from the more brightly colored bullets and enemies.

The overall mixture of complex geometric patterns and neon colors creates a psychedelic effect in the ’90s rave vein. The pulsing electronic soundtrack, created by bignic (who has also produced the scores to such games as Spell Team Death Match and Corporate Lifestyle Simulator) cranks up the warehouse techno party vibe to full effect.

For a game that boils down to “shoot enemies, dodge bullets,” Zenzizenzic crams in tons of depth and even subtlety. In addition to various weapon and shield power-ups dropped by enemies, you get a couple of special weapons powered by “energy,” an additional kind of power-up dropped by enemies. These range from guided missiles to huge laser beams to more complicated charged shots.

There’s even a rudimentary economy driven by points scored. Use it in between games to unlock additional weapons, levels and play modes. You can even spend points in-game to grant yourself an extra life, an exciting alternate option to the typical “Continue: Y/N” screen that will keep you thinking ahead even in the midst of the action. 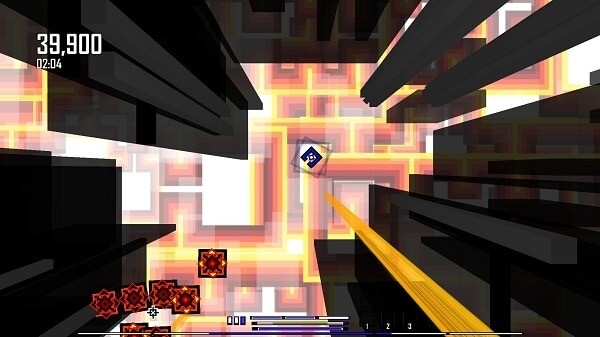 To keep things fresh and add replay value, Zenzizenzic offers multiple play modes, most of which must be unlocked by spending previously scored points. You can play through the five levels of the standard Arcade mode or jump straight to boss fights or bonus levels – essentially high-speed versions of “don’t touch the side” – for extra practice. Most interesting of all is Macro Mode, a procedurally generated rogue-like mode complete with “shops” for weapon power-ups.

Perhaps the game’s most intriguing aspect, though, is how relaxing it is. Challenging? Yes. Punishing, even? Still yes. Frantic? Definitely yes! But between the thumping basslines and colorful swirling squares, playing Zenzizenzic feels more meditative than nerve-wracking.

Sure, bullet hell aficionados will talk about the trance state of getting into “the zone,” but with games like Ikaruga or the Tohou Project series, those glimpses of meditative shoot-’em-up mayhem come only after hours – or even years – of practice. With Zenzizenzic, that sense of calm in the midst of frantic motion is there from the beginning, whether or not you’re normally any good at shooters. 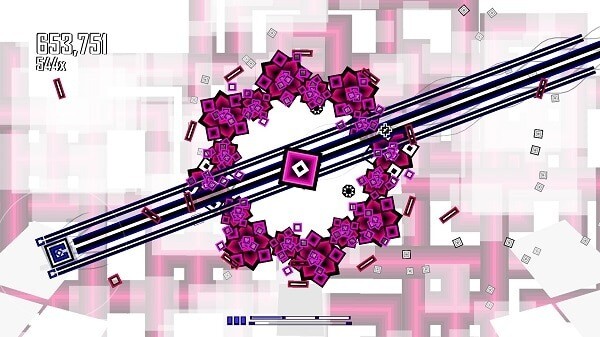 Paradoxically calming and challenging, Zenzizenzic takes the single-screen twin-stick shooter into new realms of abstract imagery and subtly demanding gameplay. It’s an obvious recommendation if you’re a bullet hell fan. More importantly, pick this up if you’re not. Zenzizenzic could be the game that changes your mind.

Watch the trailer for Zenzizenzic below:

One thought on “Review – Zenzizenzic, an Abstract Twin-Stick Shooter” 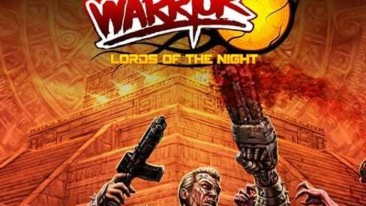 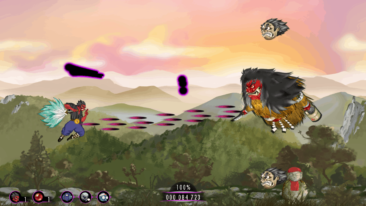