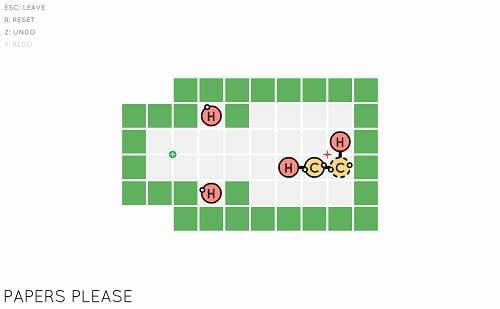 In Sokobond, you progress by successfully constructing elements from their component particles. It’s a simple premise, but the execution requires solving some truly devious puzzles that increase in complexity. It was named one of the PAX 10 for 2013, and is an IndieCade 2013 finalist.

The name sounds a lot like Sokoban, a classic transport puzzle game. The comparison goes deeper still; creators Alan Hazelden & Harry Lee suggest that the gameplay is akin to Sokoban and English Country Tune (link to our review). Were these two titles to bond, what would emerge is a minimalist puzzle game that is likely to rattle your brain on the molecular level.

The introductory puzzles familiarize the player with the basic premise: to clear a stage, construct an element by correctly combining the components present in the room. You’ll control one molecule which is moved a tile at a time.

All molecules start with a set number of connection points that they can accommodate. Join other molecules together by coming in contact with them, thus using up a connection point for each involved in the juncture. Molecules are joined permanently (unless you are on a level with a splitter (more on this later), and clearing a stage requires that all molecules use up all their potential connections, so plotting the right course is essential. Physical barriers within stages will also demand that care be taken while making moves.

Zigged when you should have zagged? No worries. You can undo moves all the way back to the beginning of the stage. The levels are complex enough that it certainly isn’t remotely like a cheat. Most of the solutions are found through trial and error, so the ability to call a mulligan is greatly appreciated.

Tools of the Trade

Each level cleared opens up additional puzzles on the main screen, eventually opening up additional sections. Once levels of a different color are accessible, a new aspect is introduced in those puzzles. For example, a red cross might be present in a puzzle between 4 tiles. Dragging two connected molecules across this link will sever the link. In other stages, a connection can be strengthened between two particles, allowing them to use up multiple connections between one another and thus preventing other molecules from attaching. Some tiles will cause the particles to rotate.

The stages containing these modifiers make up some of the best puzzles I’ve encountered. While I would even find myself flummoxed with some of the solutions that required merely linking up the component parts, it takes on a whole new level of frustration vs. reward once these game-changers are introduced. 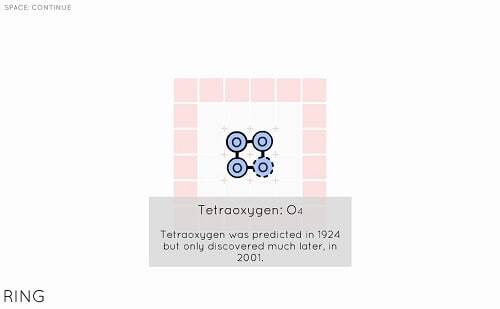 While playing through, on occasion I had to wonder: Would actual scientists perform better at this game? I would see the elements that I had “created”, and sometimes I would think “Yeah, I’ve heard of that,” or “I drank some of that once”. Others were a complete mystery to me in name alone, to say nothing of what molecules went into their creation. When I found myself stuck on some of the headier puzzles, I envisioned Sheldon from The Big Bang Theory scoffing at my lack of knowledge. It certainly takes nothing away from the game, as there are enough visual clues provided that even a layman can figure out what goes where without inadvertently creating yellowcake uranium.

The Sounds of Science

The puzzle solving action is accompanied by a stress-evaporating ambient soundtrack. It’s not incredibly varied, and the sound effects are just present enough to make a point of connections and the clearing of a level. If the thought of compiling scientific data whilst undergoing a hot stone massage strikes the right chord, you’ll be right at home.

Ultimately, Sokobond is a masterful puzzle game. It doesn’t concern itself with visual trappings, focusing instead on being a thoroughly compelling problem solving experience. It’s lean, clean and wildly addictive. 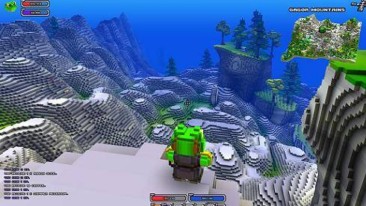