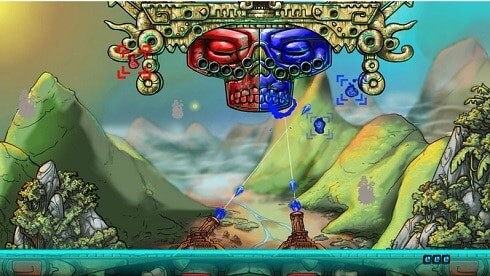 Does this Ravager ascend to new heights, or should it stay buried in the depths?

The world you are tasked to defend in Rise of the Ravager, while not the most stunning vision of beauty, is still charming and stylish enough to make the fight seem worthwhile. In the opening scene, you’re presented with beautiful illustrations reminiscent of the 2001 animated series Samurai Jack, and this montage details why you’ve been called upon to save the world. The game menus are well-streamlined and get you into the action quickly.

Enemies come in four different colors; red, blue, green and yellow. You have corresponding ammunition for each color (red kills red, yellow kills yellow etc.) and off colored bullets have no effect on enemies.

Initially, I found myself aiming my reticle at enemies and wondering why they weren’t exploding. I wasted armories worth of ammo only to watch them plummet to the earth around me and destroy my planet. If you ever picked up the guitar controller in Guitar Hero for the first time and wondered why endlessly playing the red chord resulted in getting booed off the stage, you will appreciate this initial upset.

There is a real sense of accomplishment when you start getting into the rhythm of battle in Rise of the Ravager, and while you can get away with frantic changing of fire types in the early levels, the later levels will keep you on your toes and force you to stay alert and skillfully deploy the correct ammo.

The in-game currency allows you to set up your defense (or offense) in a manner that compliments your style of destruction. You can pump points earned from completing a round into a variety of different stats such as bullet power, fire rate, creating an auto turret that fires randomly for you, and even adding additional towers to really boost your offensive prowess. While you are never invincible in this game, and death can come swiftly to the unaware, I did find that certain power-ups are far more valuable than others. Early levels of the the game can cleared with ease, but this lulls you into a false sense of security about the game’s ultimate difficulty level.

On a side note: while playing my version of the game I encountered a game-altering scenario involving the speed at which the game is played. At first, the action seemed to be progressing almost too slowly, as if the frame rate had dropped. And yet, no frames were missing, so I couldn’t tell if the game was just providing me with a slow curve with which to settle in to the game. After either dying or pausing and unpausing the game, I would be launched into an almost impossible hyper-speed version of the game in which rounds would end mere seconds after they had begun. Hopefully, this was just the way my less-than-optimal computer rig was coping with the inner-workings of the game and is not a standard issue, as the speed jump makes for a real playability problem.

While I wasn’t able to take advantage of the local co-op function, I can speak to the game’s tight controls and frantic action, and I can assume that the game would only get more intense if you had to rely on your buddies defend against the endless hordes comprised of even more foes.

Attack of the Clones

The multi-staged boss fights are a highlight of the game, and help to not only showcase the creative brain-power from the artists at Gentleman Squid, but it brings some much-needed variety to what is an otherwise repetitive cast of characters.

There isn’t a great amount of sprite diversity to be found in Rise of the Ravager. There are about eight or nine enemy designs in total (as far as I could tell), with each enemy class coming in a variety of four different colors (that palette swap is explained in the gameplay section of the article).

While I understand the choice to keep designs similar, I can’t help but feel like using slightly augmented designs for the different colors would do wonders to help to keep the overall enemy design from appearing stale; it feels similar to when you know that a developer has just taken a 3D model of a Dwarf and changed to the color to green to create a Gnome. The enemies themselves are well crafted, but I really believe the artists could have enhanced the visual presentation greatly by giving the different colored enemies some unique visual variations.

The background graphics share the same thematic polish as the sprites. Unfortunately, they also change so rarely that I almost didn’t notice when I had been brought to a new area. On the plus side, as the in-game lore progresses, the landscape is altered, appearing more war-torn.

The soundtrack runs into the same issue as the visuals: while the tribal drum beats are a natural fit, and successfully drive the action forward at first, there is almost no deviation or variety to the rhythm, and after a while (though oddly hypnotic) they become monotonous and dull.

Overall, while the game’s art direction and style are suitable fleshed out, there just isn’t enough to diversify it. You will have seen almost everything before you even reach the half-way point of the game.

So Much to Ravage, So Little Time

The gameplay does a fair amount more to elevate the experience to a higher plane. The subtle addition of adding color-based ammunition is an effective tool for adding depth and strategy to the commonly mindless, reactionary approach most shoot-em ups usually require. In Rise of the Ravager, only certain hues of ammunition will work on a specific class of enemies.

If you can overlook the visual repetition and the tedium of the soundtrack, there’s an entertaining game to be found here. I feel, however, that the developers should have hit the snooze button a few more times before this Ravager rose: more visual differentiation would have really made the game shine.

All told, Rise of the Ravager is an addictive shooter that does a great job of yoking that wonderful hypnotic feeling that a great shoot-em up can provide, while also deftly mixing up strategy elements and implementing an effective upgrade system to keep you on your toes.

One comment on “Review: Rise of the Ravager mashes together Rhythm Based Games, Shmups and RPG” 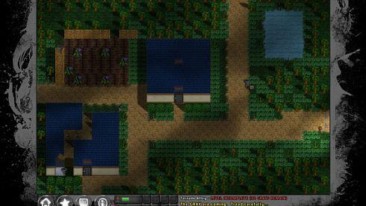 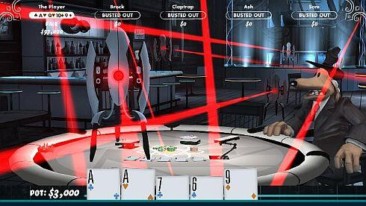 Achievement Unlocked: Telltale’s Poker Night 2 Brings the Loot and Goes All In!