ONE FINGER DEATH PUNCH – WHAT WE THINK:

The problem with rhythm games is that they don’t have enough punching. Thankfully, Silver Dollar Games recognizes this. One Finger Death Punch strips down the rhythm game interface and uses it to drive an old school, side-scrolling beat ’em up in the vein of early arcade classics like Kung-Fu Master.

A rudimentary skills system, scaling difficulty levels, a number of different play modes and an approach to graphics that mixes up stylish minimalism with cinematic action keeps things entertaining far beyond what you’d expect from the two-button control scheme.

You control your martial arts master with only two buttons: click left or right to attack enemies approaching from those respective directions. So yes, technically you can play this game with just one finger. It won’t be easy, though, because those enemies just keep coming…and coming…and coming.

And don’t mash buttons, because every missed shot makes you more vulnerable to enemy strikes. The better you do, the harder it gets; achieve more victories, and the enemies speed up.

One Finger Death Punch wrings a surprising amount of play value out of this simple premise. Steal weapons from your attackers; swords, clubs and spears extend your reach, while bombs, arrows and daggers can kill your enemies from a distance. Learn various skills; some increase your abilities with weapons, while others might heal damage or destroy every enemy on the screen once you hit a certain number of kills.

In addition to regular enemies, you’ll battle Brawlers, who must be killed with multiple button combinations that scroll down the screen Dance Dance Revolution-style, and colored enemies, each of which requires a different attack combination as they dodge your punches and kicks.

And while there isn’t much of a storyline, per se, there is a map you can work your way through to pursue new skills and experience different play modes. 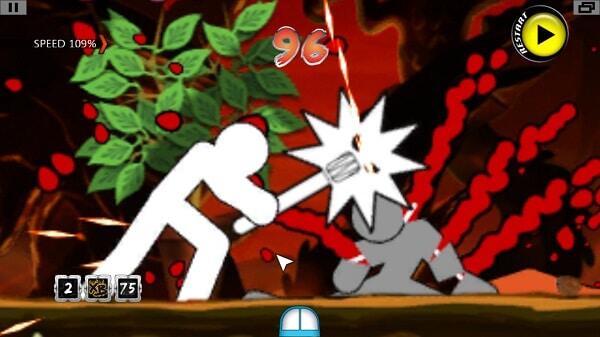 What One Finger Death Punch lacks in complexity, it makes up for with style. Inspired by both martial arts movies and the Xiao Xiao series of online kung fu animations, the game features thick, stick-figure characters disemboweling, impaling and beating one another into bloody pulps over a variety of backgrounds. Nods to classic action films include Light Sword (don’t call it a “lightsaber”) and Retro Film Rounds; the latter features a grainy sepia tone that prevents you from distinguishing enemy attack patterns by color.

Sound design is also worth a mention; there’s a satisfying “SMACK” when foot meets face that adds to the game’s addictive quality. 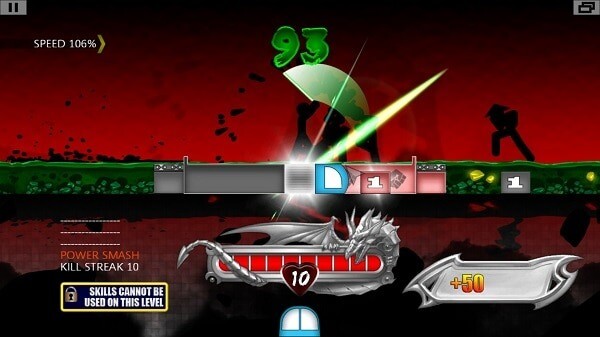 The developers also have a sense of humor. Instead of simple percentages, loading screens display a list of martial arts movie cliches (“Learning kung fu from a book” progresses through “Executing training montage” all the way to “Losing to overconfidence,” “Flashing back to training” and “Delivering finishing blow”), and tips on the map screen helpfully point out the protagonist’s resemblance to a men’s restroom logo.

The self-aware humor goes a long way toward endearing the game to people who might be put off by the game’s one major flaw: a narrator who delivers instructions in a bad Pat Morita impression that is…not particularly sensitive. Thankfully, this can be disabled in the Options screen. 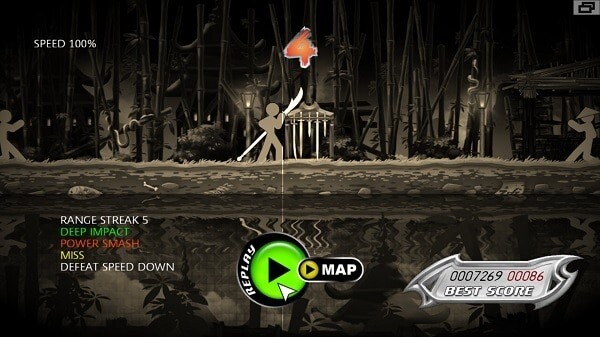 Easily grasped controls and just enough variety to keep things interesting make for a surprisingly addictive game. If you love martial arts movies but could never quite master the intricacies of Street Fighter or Mortal Kombat‘s joystick and button combinations (or if you just want to experience the visceral thrill of punching a stick figure’s heart through his featureless gray chest), this is the game for you.

Note: This review is based on the PC version available on Steam and Desura. 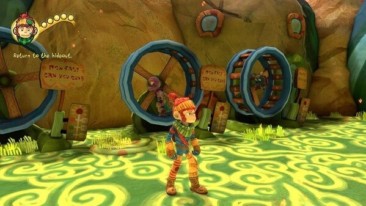