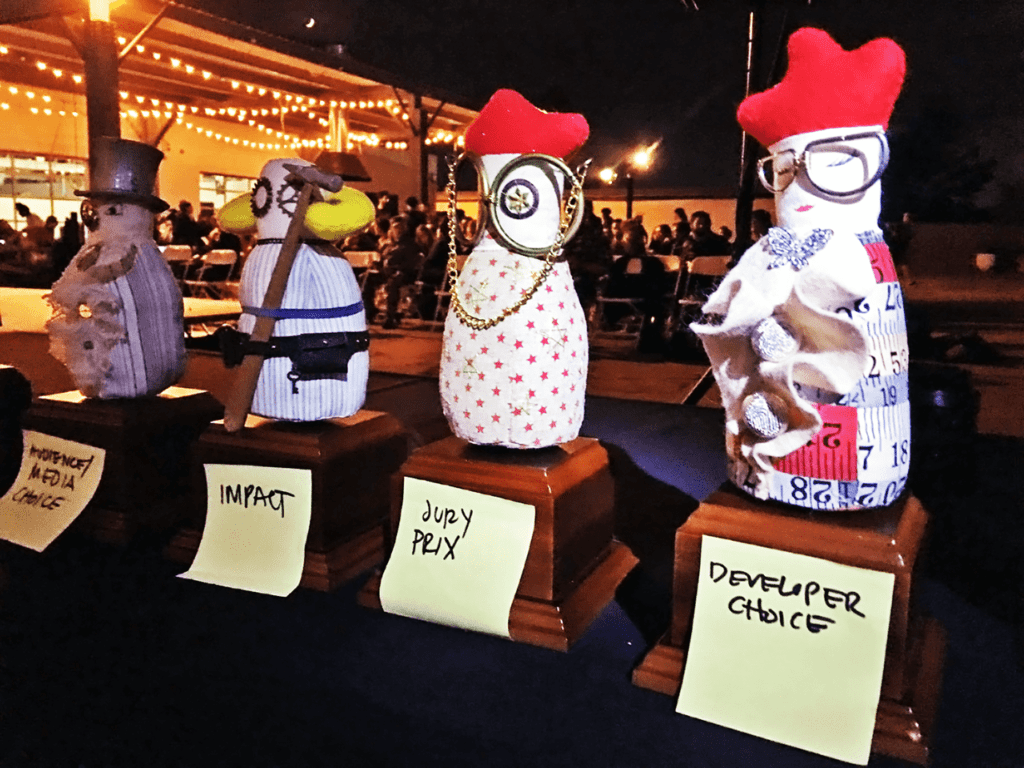 Since leaving Culver City some four years ago, the wonderful IndieCade festival, showcasing independent games of all shapes and sizes, has moved from place to place every year, from the downtown campus at USC to Little Tokyo in downtown Los Angeles, and this year to the Santa Monica College of Media and Design, where the world-famous college radio station KCRW lives.

Navigating our way through the various rooms and corridors of the complex, we discovered a variety of fascinating, adventurous, experimental, sometimes obtuse, sometimes maddening, often ingenious new games to play.

One of the joys of games quickly reminds us of its power – to sit down across from complete strangers without introduction and engage in thought, strategy, camaraderie, a spectrum of emotions and personality. Of course, the sorts of titles curated into IndieCade are very conscious of these dynamics and are – by design – attempting to test their limits.

So here were some of the standouts for our team of writers, editors and scouts that picked their way through the offerings over two days.

“When our editor-in-chief talks about games being able to suddenly put strangers together and force them to cooperate, he very well could have had Octopad in mind. An experimental approach to the standard NES controller that splits a single device into eight, each with a single button or a single direction from the direction pad, the Octopad turns even that first slow level of Tetris into a nail-biting bout of teamwork and hilarity.

Splitting the responsibilities into their tiniest parts also amplifies the guilt and shame that accompany each mistake. Given the responsibility of rotating the following pieces, I felt like a massive let-down to the entire group each time I hit the button an extra time just before a piece landed in place. ‘You had ONE job,’ I’d silently rebuke myself.” ~InfinityWaltz

“This is a small, simple game that takes the concept of golf to an absurd level. Many levels are bite-sized, feeling like a Warioware-type. The goal is simple: get your ball, or object, to the golf hole by as few shots as possible. It’s simple, but you then learn that the way in which you go about it becomes complex.

In one instance you control a small car; in another stage, the game turns 2D and your ball has a grappling hook to traverse through portals. The game is goofy and made me smile multiple times. It’s a charming outing where the developer’s creativity really shines through.” ~FictiveTruism

“I’m a huge fan of 3D platformers, having grown up playing them on the PS2, so I was pleasantly surprised when I played Mulaka, a game that captures the feel of an older 3D platformer, thanks to how much focus is put on the world design. There is a mystical desert landscape to explore with linear paths that tested my platforming skills. The game even comes with a Zelda-style targeting system for its combat. One feature of the combat that makes the game unique is the ability to morph into various animals when you initialize attacks. Nothing’s cooler than turning into a bear to pull of an area of effect attack!

I was surprised to learn that this game came out back in February, but I must say it left an impression on me because I’m a big fan of the genre. It all started to make sense when one of the developers told me Banjo Kazooie was a big inspiration for the game.” ~FictiveTruism

“Mexican studio Lienzo has come a long way since their first game, the comparatively simple – though addictive – Metroidvania Hunter’s Legacy. On top of the transition from 2D to 3D – complete with brilliant but maddening platforming and flight mechanics – they’ve also opted for a unique and compelling setting based on the legends of the Taruhumara people of the northern Mexican deserts.” ~InfinityWaltz

“This game has so much style! It has such a striking minimalist, 2D-pixelated look that it immediately caught my eye. This game has you playing as a hoverbike racer who wants to enter the biggest race in the universe. One of the reps spoke about how the game has a large world to explore, filled with side quests and shops.

But the main mechanic of the game is the fast-paced, side-scrolling hoverbike races where you shoot and out-race your opponents. The racing felt fast, like in a going-too-fast kind of way, which added some nice tension. It’s a unique game that looks very promising, and it’s coming out in December on all the major platforms.” ~FictiveTruism

“Come for the hoverbike racing, stay for the excellent ’90s hip-hop soundtrack and weird Australian inside jokes.” ~InfinityWaltz

“So happy to see new and daring ideas coming from Gamemaker Studio-derived titles. Brittain brings to us a wholly new world, drawing on his architectural background to add that little extra bit of polish to his passion-driven pixel art universe. The vaporwave soundtrack is also on point.” ~Indie-Game-Freak

“A student project at USC that clearly became a labor of love, with a development team that has grown to over 24 people, One Hand Clapping has you singing into a microphone to solve puzzles. The game maps frequencies to numbers that are then used to calculate any variety of interactions – jumping, climbing, etc. 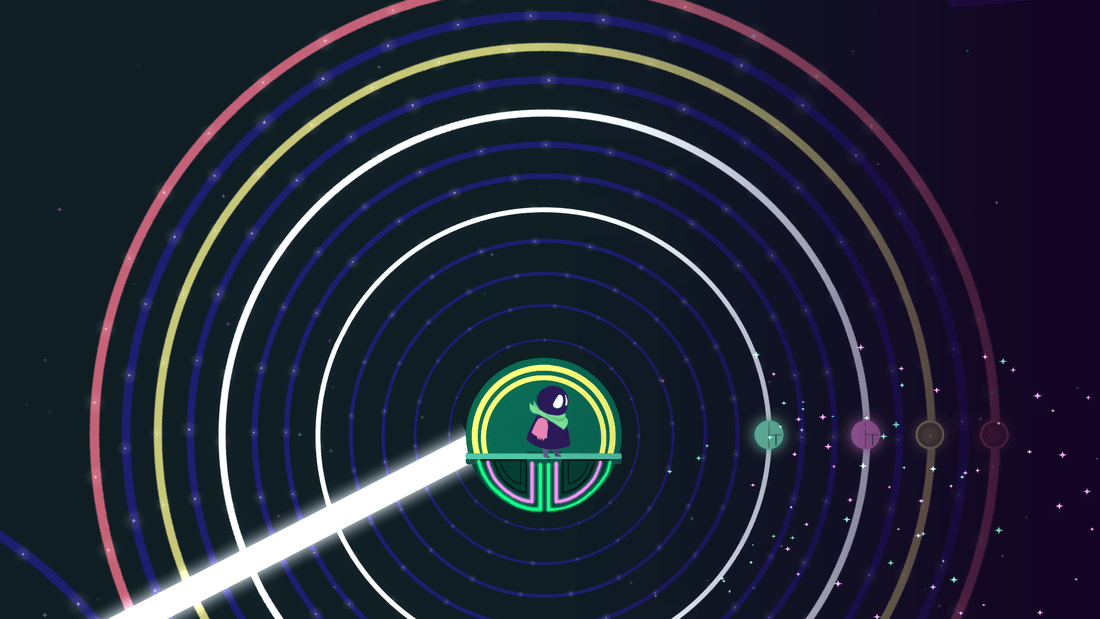 The brightly colored illustrative style reveals a world of interesting characters in a friendly platformer that will get you to play with your vocal register and ideally build confidence in your own ability to sing and reach those high and low notes.

It all comes together in a wonderful package that had a constant row of gamers caterwauling at their screens. One Hand Clapping also walked away with the IndieCade 2018 Aesthetic Award.” ~Indie-Game-Freak

“This is a game inspired by Odin Sphere and Muramasa: The Demon Blade. It’s got wonderfully drawn 2D art style evocative of those games. The main focus of the game is on combat, and it feels fantastic. It plays similar to Dust: An Elysian Tale, where combos felt fast and responsive. Pulling off a quick combo then quickly dashing to get behind an enemy to finish them off was satisfying.

As far as structure, it seems like the game is more narrative focused and linear. There were also upgrades you can purchase to make the combat even more in depth. It’s yet to be seen if the game contains more RPG elements or a Metroidvania-style open world. Regardless, I didn’t mind the linearity because of the fun hack-and-slash combat.” ~FictiveTruism

“With its concept of games within games – players take on the role of a student playing a handheld game in class – and its numerous homages to classic late ’80s video games in general and Nintendo Gameboy in particular, this Brazilian project is delightfully meta in concept.

What impressed me more, though, was how completely fun and frantic it was – trying to manage a handheld platformer while also shooting spit-balls to distract the teacher was was a breathless attention-management high wire act that reminded me a bit of the frantic task-juggling in games like the Cook! Serve! Delicious! series, though it plays with totally different genres.

When the handheld game spilled out into the ‘real’ world and the game shifted into an action platformer made out of classroom objects – staplers as jumping platforms, scissors as spike traps – it was a delight and a relief: delight because of its cleverness, relief because I no longer had to try and juggle two games at once.” ~InfinityWaltz

The Game: The Game

“An interactive narrative project, The Game: The Game (titled after the Neil Strauss book) puts players in the role of a woman meeting a friend at a bar and being approached by aggressive self-styled pick-up artists. What could have been a preachy and didactic experience becomes visceral due to both intentionally limited conversation options – the further I went, the more I just wanted to leave the bar WITHOUT any additional conversation – and an oppressive soundtrack by experimental music act Xiu Xiu.

Asked if she’d ever considered doing a VR implementation of the project, developer Angela Washko responded with a firm ‘no.’ The Game: The Game, she explained, is more than anxiety-provoking enough in two dimensions, and adding the immersive quality of VR would be an act of cruelty.” ~InfinityWaltz

“The first game we sat down to play ended up being one of our favorites of the whole festival: UFO A Go-Go. The premise of UFO A Go-Go is that ‘It’s party season throughout the galaxy, and everyone is hosting a spectacular celebration! You and your friends take on the role of enthusiastic Party Hosts wanting to earn the prestigious title of Intergalactic Party Captain. 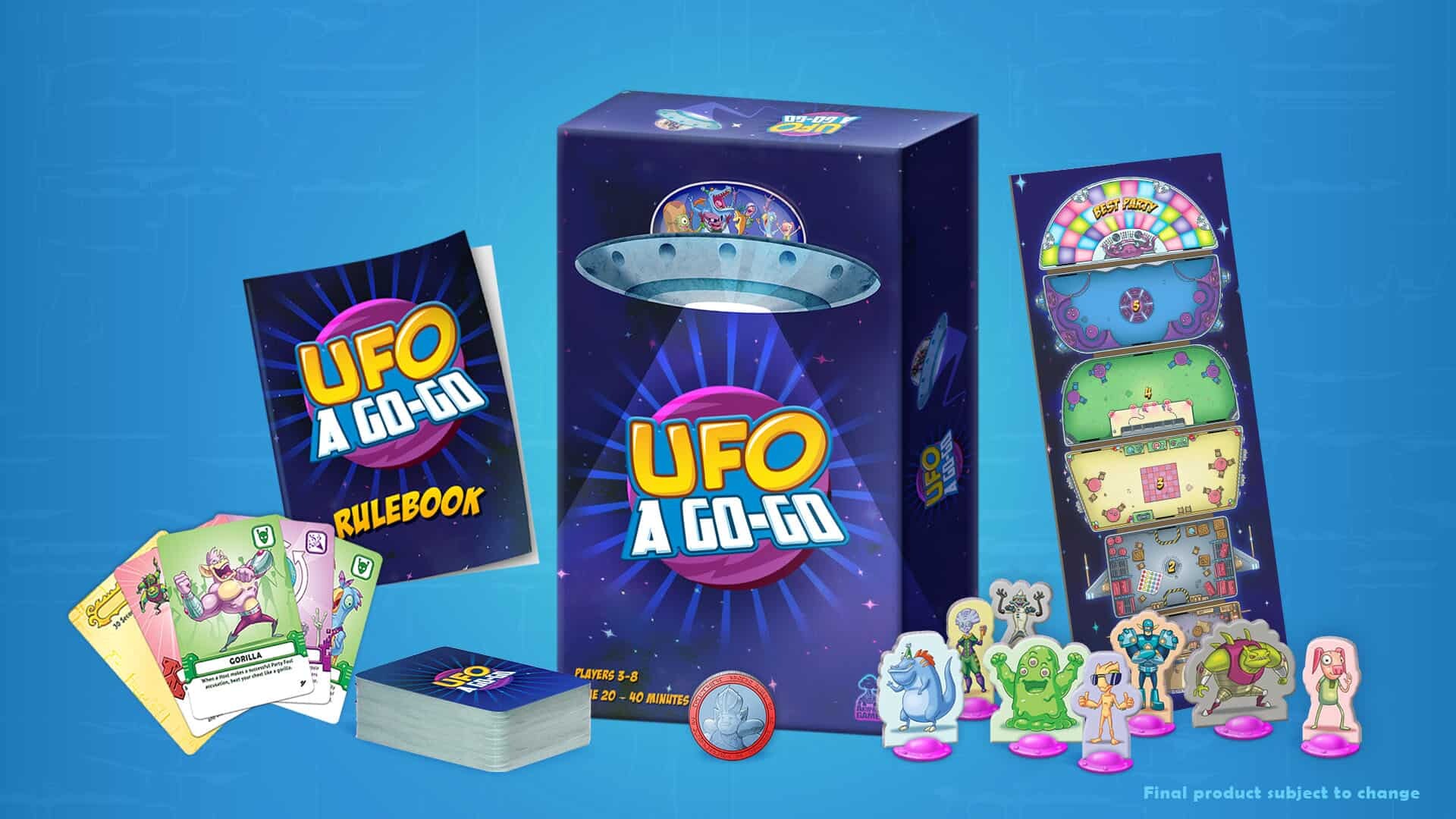 To achieve this, you must invite and maintain the most Aliens at your party. Hosts take turns drawing cards in hopes of finding an Alien. Aliens are worth one point, but they bring a special rule for only you to follow. If you catch another Host messing up on one of their Alien rules, that Alien will leave their party and join yours. Reach the designated number of points and maintain them for five turns to win!’ 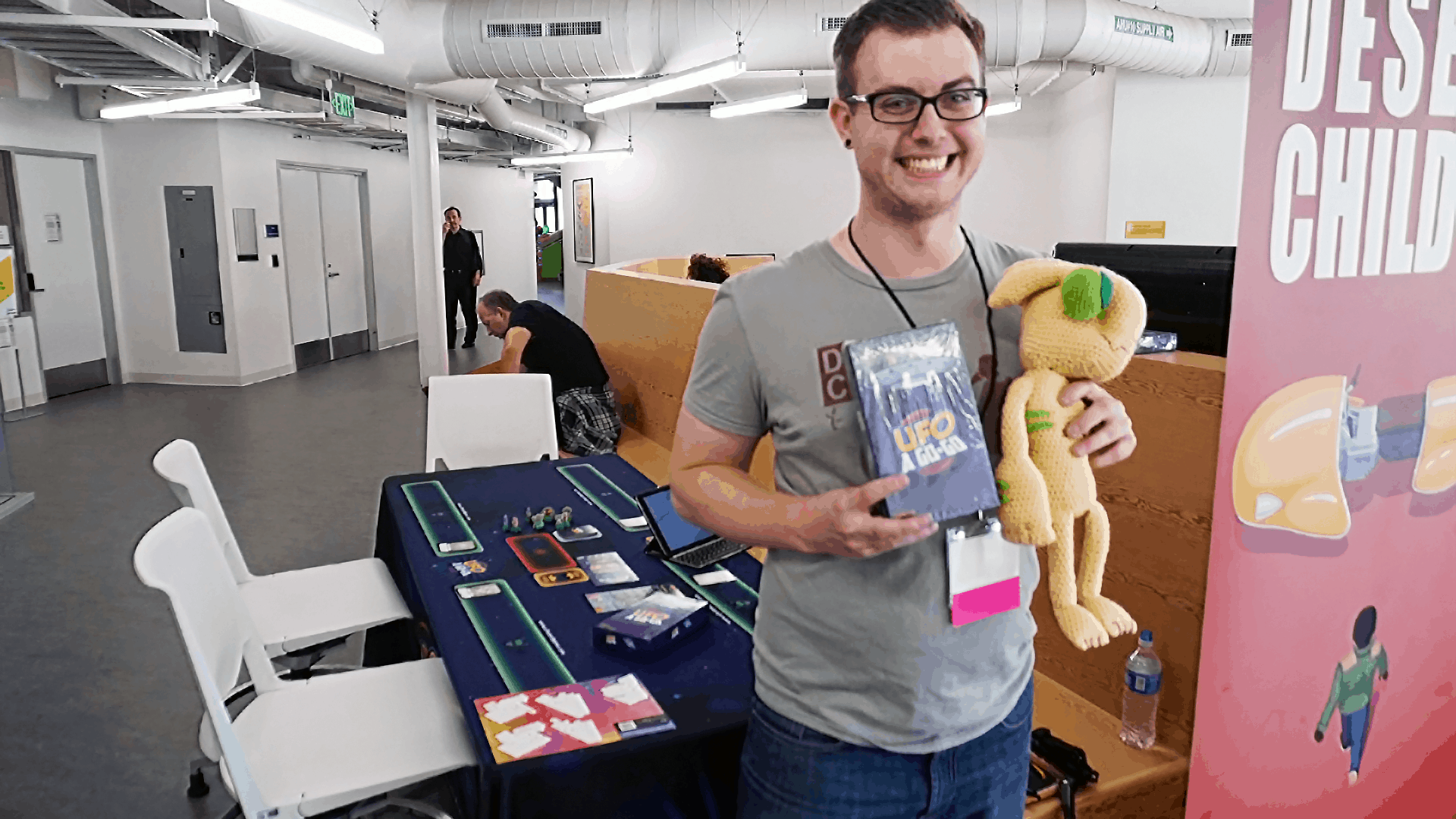 That’s the basic pitch, and that is exactly how it plays. It’s silly, it’s clever and inviting, it scales but feels balanced. At the time of this writing, the game has launched its Kickstarter, and we went home with a prototype to learn more about its dynamics and idiosyncrasies, so stay tuned for a more comprehensive review as the game itself evolves and moves towards completion. Learn more at the official page at Akupara games.” ~Indie-Game-Freak

“Rival Restaurants was another board game that grabbed us and had us frantically trading with fellow competing restaurateurs to become the big Wiener. Think of it as a real-time Overcooked trading game, but where each character has a special superpower. 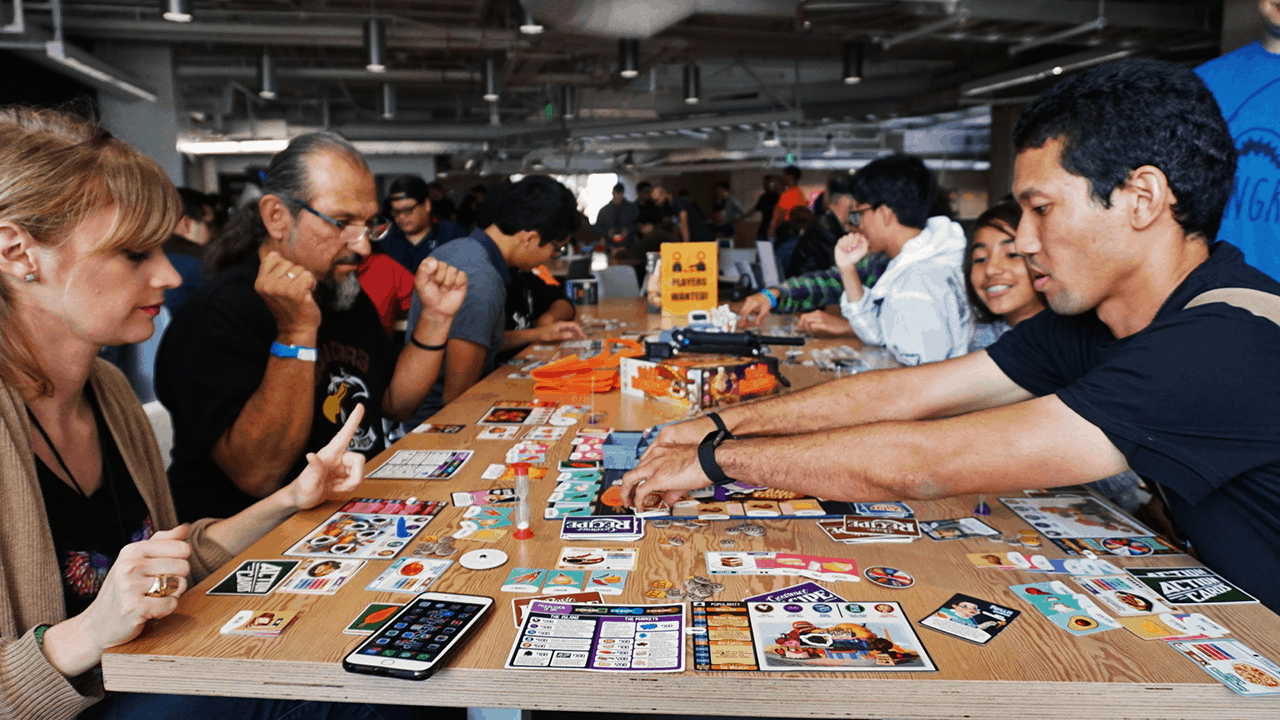 Action cards can be purchased from The Island, one of several destinations you can choose to land on via an interesting travel dial that all players reveal simultaneously. Then a egg timer is flipped so that everyone can begin buying and trading ingredients in hopes of checking off the complete list of requirements for their current dazzling recipes.

Along with some wonderful caricature-like art and lots of moving parts that are still simple to pick up, this one is a sure winner. At the time of this writing, there were only a few prototypes in existence. But you can look the game up on Kickstarter and help launch it into what could be a very illustrious career.” ~Indie-Game-Freak 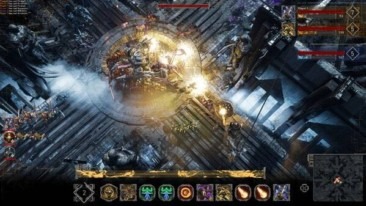 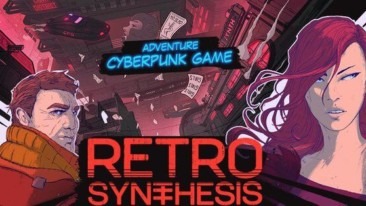