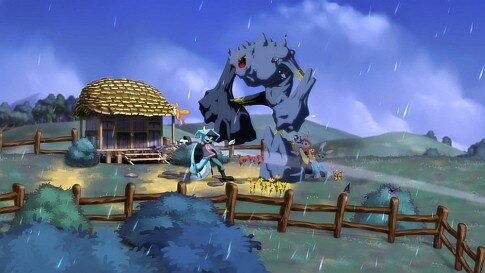 Immerse yourself in a gorgeous hand-painted world on a search for your true identity. As the mysterious warrior, Dust, you must master the ancient Blade of Ahrah to battle dozens of enemies with an intuitive combat system, take on a variety of quests, discover powerful upgrades throughout the massive, open world, and uncover the story of an ancient civilization on the brink of extinction as you fight to uncover your own past.

Dust. Not to be confused with From Dust or Dust 512, but Dust: An Elysian Tale, an indie ‘Metroidvania’ action platformer from the work of one man – Dean Dodrill, a pro cel animator who worked on the game for almost as long as Phil Fish did on Fez (four years in this case), minus all the press hullabaloo and troll-baiting Fish endured (though DAET did win the Dream.Build.Play competition in 2009). That is, if you don’t also count the voice actors and Northern Ireland based music team, HyperDuck Soundworks, who are also quite ingrained in the indie gaming scene these days (A.R.E.S: Extinction Agenda, Mama & Son: Clean House and many others). Dust, our hero, wakes up not knowing who he is. He’s found by a sword who wishes to guide him. Yes, a talking sword. A bad ass talking sword that glows with blue flames and mystic runes that pulsates when it speaks. It is followed by a Fox-Bat character who claims to be a the sword’s keeper, when it suddenly floated off the wall and left its resting place. She becomes a comic-relief type character, who also in game-context, grants you spell abilities. She often breaks the fourth wall, to much amusement.

Some may find her annoying, like Link’s Navi, but when she clarified that when the merchant will buy things from you for a bonus whenever you sell a new item, “You’ll buy them at a hiiigh priiice” in a low raspy voice, she won my heart. In fact, all the characters are very well done. No one sounds like they are reading from a script. Everyone has appropriate tones and whimsy. Even painful stereotypes are funny and well played.

Dust tries to bring to us an action platformer with the animation quality you’d expect in a feature film. You need only to watch a trailer to see how that turned out. Gorgeous, is a word you could use. Lovely hand-painted parallax backgrounds unfold behind you as you navigate the various levels. And even though many of the enemies appear to be Flash-style paper dolls with jointed limbs, the player character is highly animated.

The enemies, however, are not just stiff cut-outs. Whether blocking you, or attempting to land blows upon you, the style of their animation makes them easier for the player to read and peform to their best abilities, without any deaths feeling ‘cheap’ because something hit them that didn’t telegraph properly.

While talking to NPCs, you are greeted with a close-up that constantly moves and motion tweens. Some might get put off by their constant swaying, but I found it better than if they just remained static; it gives them a little spark of life, even though if you were to attempt to recreate their movements in reality, people might think there was something wrong with you.

My only complaint about the animation is in the two or three cut scenes that play in key points of the story. The art quality is still there, but the frame rates of animation you’ve gotten used to while playing simply disappear. It’s jarring and pulled me out of the drama for a moment. The life comes rushing back in when you return to in-game exchanges though. Actual gameplay is a lot like Symphony of the Night albeit in an outdoor environment (and some caves). However the minimap only keeps track of ‘areas’ in its box-to-box track, keeping to where you are located in a particular zone. Some of the areas or screens can actually be quite massive.

When you leave a zone, you are met with a map of the surrounding areas, where you can choose which to go to next. You are even given statistics on how much of each zone you have explored, and how much of its secrets and treasure you’ve discovered. The completion percentage record goes well over 100%, and even after completing the game, and finding much of its hidden nooks and crannies, I noted there was still quite a big chunk of map to explore.

The enemy AI after the tutorial area is nice. They jump at you, dodge your attacks, and try to strike you when your attention is occupied elsewhere. I played on the Tough difficulty setting, and found early battles to be challenging and sometimes not something I’d be walking away from in one piece. You are given all your attack abilities right from the start – the only thing you unlock during the game are a few spells and movement abilities that allow you to reach new areas. I played with a focus on magic, and by late game I felt a little over-powered. Your special Dust Storm attack is part of the uniqueness that this title brings as you are able to literally whip up a storm of attacks for a limited time, and abusing this power can lead to your demise so it must be used carefully. Combos and chains replenish your action bar which is the gasoline for your special abilities.

You can level up, craft, and manage inventory as well in RPG fashion. While leveling up, you can allocate a skill point into Hit Points, Attack Power, Defense, Magic or your minion’s power. But, you can’t make anything higher than four points of your lowest stat. This is a nice way to prevent ruining your advancement by having a challenge that you cannot overcome due to excessive min-maxing. Itemization is fairly simple: Once you find a better weapon or armor there is little reason to go back to something else. Rings and Amulets are a little better in this regard. Choice in equipment balances between power, or ‘Magic Find.’ Be powerful, or be an item-hoarding scrooge. Also, most new gear drops as a blueprint, that you must then check if you have the right materials to craft it. Most crafting items, once dropped, can be sold to a merchant, who will then constantly restock its supplies. Thus, even if you need something that is quite rare, find it once, and you’ll have a steady supply without having to resort to any grind.

The final draw comes in the form of a few time-attack levels, each with its own Leaderboard. These timed, scored, race maps can be found across several of the zones, and can offer a good challenge for beating your best time, or your friend’s best time. Completing it once can give you a simple item, but other than that, they’re just there to provide a little extra ‘something’ for the people who want to squeeze the most out of the game. It’s surely a nice addition.

It’s a near-perfect experience, and my only gripe is in a non-game element. The amount of effort, sweat, and love that went into it is astonishing, and when you complete it, you can see for yourself in the credits, that one guy, a bunch of voice actors, a trio of musicians, and a bunch of marketing drones are who you can thank. 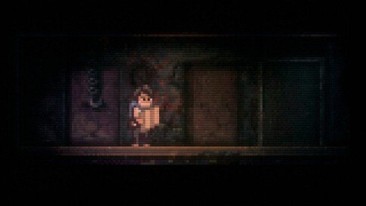 Review: Lone Survivor – Jasper Byrne is playing with your expectations 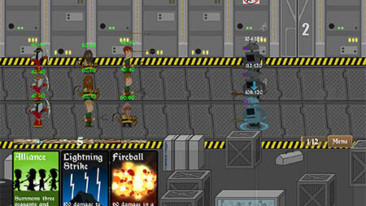 Review: The Trouble With Robots – a side-scrolling customisable card game