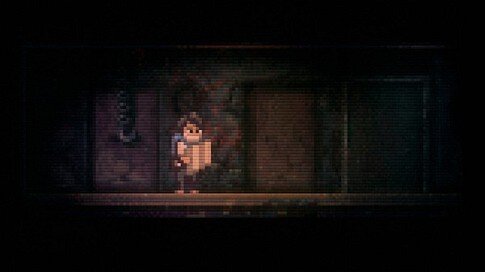 In this psychological survival adventure, the masked protagonist must escape from a city ravaged by disease, by any means necessary. Starving and exhausted, he has begun to question how much of what he sees is even real. A new kind of adventure where the choice of how to survive is up to you.

You awaken in a dilapidated apartment complex where appliances have just stopped working, and some chirpy neighbors are still in denial of some nefarious event that has turned the world into a dangerous, nightmarish place.

Created by Jasper Byrne, who has a history of making lovely low-rez games (that may have begun with a tribute to Amiga computer games on which I invested a large portion of my late grade-school years), Lone Survivor is his best outing yet and in kind is getting the attention it deserves, with high visibility on Steam and in major press outlets.

The 2D sidescroll makes navigating levels a little confusing at first; doors leading off the right or left of screen or even in front or behind you do not at first appear to lead where you might think, but some time spent with the map help make sense of things and this reliance upon the map (accessed by pressing the ‘M’ key) is underscored by a note you find early on.

In spite of its “crude” graphics, which are of course totally deliberate, the game is very creep-inducing and I found myself wiping my sweaty palms more than a couple of times, to my surprise. In fact, it may very well be that the level of abstraction presented by the graphic treatment is what in fact makes this as effectively spine-tingling as it is. Case in point – though the protagonist is drawn as wearing a mask, the grainy look makes it appear as though he has a fixed freakish perma-grin. Seldom have I found myself holding my breath when playing so-called horror games that feature high resolution 3D graphics, because they often rely on gore and surprise as opposed to what works here, and what David Lynch knows works best: seeing the threat coming towards you and being helpless to stop it.

Hazy, lovingly detailed set dressing, illuminated only by a small orb of light from your flashlight (when you dare turn it on) help the imagination induce the gut-wrenching apprehension of pressing onward into the bleary decay. The “Survivor” part of the title is not just for show either. You are as likely to die from starvation or lack of sleep as getting your brain sucked out by an ambling whatever-those-things-are. Returning to the questionable comfort of your bedroom to get some sleep (which is an arduous journey back just to save a checkpoint) becomes ritual.

A nice effect is the disgusting foods you have on offer when hunger warnings flare up – squid on a stick anyone? How about some nice rotting meat. To this second example: rotting meat is in fact a tool more than a food staple, and one of the three hardwired hotkeys you have in your survival arsenal: 1. Lights a Flare. 2. Drops Rotted Meat on the floor to lure away whatever-those-things-are while you hide in an alcove and 3. Takes a Health Potion.

Spoilersque:
Strange dreamy happenings pop up now and then, as when you are suddenly smacked upside the head by a skull crushing headache and awaken in a throne room seated beside some sort of celestial vigilante who talks like Morpheus chilling in the checkered room in Twin Peaks. He gives you some extra ammo, tells you to take the blue pill and then sends you back to your bed. I only tell you this to underline the ways in which Lone Survivor uses non-linearity to break away from its otherwise rigid gameplay. Another creepy Lynchian example comes in the form of a brief storyline wherein cocktail music is playing and the NPCs are partying it up as if nothing has transpired, very reminiscent of something out of Blue Velvet or the first half of Lost Highway.
// END Spoileresque

Byrne does something very interesting here – rather than merely use game mechanics, graphics or even story to immerse you in the struggles of his gameworld, he employs psychological ruses, establishing and then upsetting expectations at every turn. A sort of meta-game design, which is perhaps what is primarily on offer here. Hitting the ‘E’ key toggles Expert mode on an off. In non-Expert mode, you are shown ‘X’s wherever there is something with which you can interact. I found that I seldom turned these helping prompts off. With the level of abstraction already going on, and the often confusing maneuvering through the landscape, I found the game more enjoyable with all the prompts I could get, particularly because navigation can be rather unintuitive as I mention elsewhere. While you can shoot a weapon at the bad guys, it is hardly the easy way out and toggling to weapon mode means you are stuck facing in the direction you were facing when you drew the weapon. To point in the opposite direction, you must, strangely enough, disarm, turn around and then redraw.

Perhaps this is part of the sense of frustration Byrne (a big Silent Hill fan) wants to elicit, but I found it tedious more than anything. Having played through, however, I highly doubt this was a question of flawed game design, rather than a desired effect, particularly when considering influences – and to that point, reloading takes forever. The music in Lone Survivor is a standout. Somewhere between Angelo Badalamenti and Brian Eno, its dreary ambient drones are both soporific and tension building, like the edge of a nightmare, where you just want to rest, but constantly feel like something terrible is about to happen.

All told, Lone Survivor is a successful experiment. In spite of the fact that it is yet another 16-bit-graphically-styled-zombie-platformer, it is in fact its very restrictiveness and somewhat unconventional control scheme that makes it feel like something different. That it is able to induce the creeps, which is its intention, beyond that, means that it has succeeded in what it set out to do and moreover delivers on its promise to the consumer. 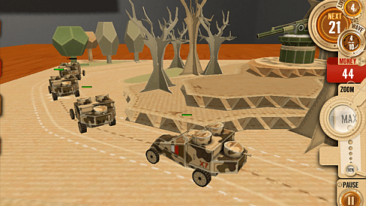 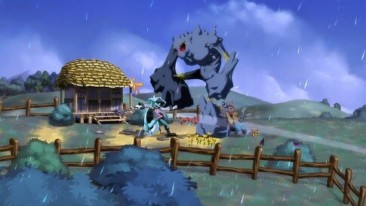 Dust: An Elysian Tail for XBLA – An Indie Game Review