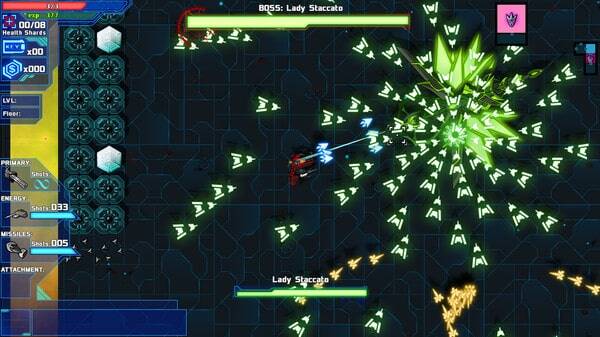 Starward Rogue – What We Think:

The “bullet hell” subgenre of rogue-lites sure seems to be the flavor of the year. I had a look at Starward Rogue from Arcen Games, previously most popular for 4X/RTS AI War. Starward Rogue’s closest cousin is a Touhou shoot-’em-up rather than a typical roguelike, but combined with elements from RPGs and more recent roguelike-likes. The end result is something special.

Starward Rogue has a fairly blank slate cold open. You get to make a choice of one of several killer robots to pilot – all with different capabilities and defenses – and are then let loose to figure things out yourself. It’s a lot like that first time playing Minecraft: wandering around, not quite sure how things work yet or what the rules of the world are.

Aside from the obvious “run out of HP and you die” rule, everything else is left for you to learn from doing. Your basic gun can be equipped with a module that enhances its performance, giving it extra damage, range, lasers or various other upgrades. Your special weapons can help clear rooms. Your shields are a buffer before taking real damage, and you also get a generous amount of invincibility in case you do get hit.

Finally, you have a one-use item that you can pick up, use or exchange as you need. All items, health packs, and missile drops remain on the map until you transition floors, so you don’t need to worry about missing out on something if you want to press on before committing to a piece of gear. Any item picked up will leave behind the item it replaced. This allows you to grab, test and decide if you want to keep your old item or try something new.

Your shields and your special weapon ammo recharge every time you move to a new room, so use them freely. (The game does manage this in a way that doesn’t feel wasteful.) Missiles, on the other hand, should be saved for emergencies, not for damage, since they clear enemy bullet patterns and break through walls.

Many item descriptions are written out in very plain, easy to comprehend terms accompanied by power level bars which are mostly easy to understand. There are a few things, though, that are a bit nebulous, like a weapon’s level of “X-Factor.” This appears to just be a general level of how awesome a weapon is in ways not otherwise immediately apparent. For instance, a weapon that gave my main gun a poison effect had it shoot in random directions around me had a fair amount of X-Factor, but a rapid fire machine gun had none.

A weapon that appears weak at first might be off set by its “hidden” X-Factor. This meter helps highlight weapons worth looking at more closely before you passing up. However, this X-Factor is not explained anywhere, so you’ll need to figure out what it means by comparing weapons to one another.

AI War looked great, even with its minimalist ship sprites that glimmered or blinked but otherwise were not very animated. Transferring a similar style to a bullet hell roguelike leads to some problems. While they look good, enemies will often blend into the background, or if they remain motionless, stay completely hidden until you clear a room, leaving you wondering why the doors remain locked. You might even bump into them without knowing they’re there. They’ll spin around to face you or change direction as they race around the room, but other than that, there’s little to no animation for the sprites. They’re just static images moving around on the screen.

On the one hand, they don’t distract your eye too much from the streams of bullets, but on the other, they lack personality. While you will eventually start to recognize specific enemies in order to be prepared for them, it will take you several runs – and perhaps hours – before you’ll be able to do so.

I feel like Arcen Games could have made more effort on this front. A simple update replacing the static ship sprites with more animated and recognizable sprites – on par with games like The Binding of Isaac or Enter the Gungeon – could have turned some heads and helped Starward Rogue become a smash hit.

The bullet patterns, on the other hand, steal the show. Like literal bats out of hell, some streams of bullets appear to have wings, some fire out like MIRV missiles, others crawl around like snakes or blast like cannons with threatening fire burning behind them. Even if the characters are bland, the main focus of your attention is a brightly burning spotlight of excellence. Rooms filled with various enemies can become a rave of chaos in seconds.

In light of the chaotically colorful explosion of bullet patterns, I could still track my own position. However, others might have a hard time for a while until they’ve grown more accustomed to the environment and sprites.

On the flip side, the bullet pattern of the bosses at the end of each floor are your more concentrated shoot-’em-up patterns, where you need to slow down and maintain nerves of steel to stay alive while slowly doling out return punishment. Every boss has several stages to it, so you can’t slip into a complete trance the whole time; be prepared for a switch-up. From room chaos to orderly bosses and the occasional gimmicky mini-bosses, I found the shifts in tempo a great way to shake things up.

Speaking of tempo, there were times that I thought I’d accidentally put on a Daft Punk album. The music has its mix of moods, but my favorite were the poppy electronic bits that reminded me of classic albums.

I also found the sounds of some weapons to be particularly satisfying. Who else loves the sounds of a bullet spray making a jumble of incomprehensible noise as it lays waste to foes that stand before you? I sure do. Sometimes I would find myself making foolish sounds to myself as I cleared rooms, silently hoping I wouldn’t get walked in on while having just a little too much fun with some of the more devastating items.

Levels as Countless as the Stars

After completing a five-floor run, I was told that if I could complete two more successful runs, I would be allowed to tackle a longer seven-floor run. There is a lot here – too much, some could say – but Arcen is known for an over-abundance of content. The title screen features records and statistics showing your accomplishments and unlocks. I was met with pages of small text filling the screen, telling me that 70% of the enemies and items have gone “unseen.”

But this is good! Especially for this genre, variety is the spice of life, and when you are expected to spend hours over hundreds of runs, you need that amount of varying challenges and load-outs. Granted, this always means RNG plays a heavy part, but that’s what comes with the territory here. You cannot prepare for what lies ahead; you can only make do with what you are given. That’s the appeal in the long run. There is little else to be said other than “mission accomplished.”

Starward Rogue is a fine game that could definitely use your attention – more attention in general. If you like to explore the various types of recent roguelike-likes while trying something different – or if you just want a good shoot-’em-up – this is for you.

Starward Rogue is available via Steam.

Watch the trailer for Starward Rogue below: 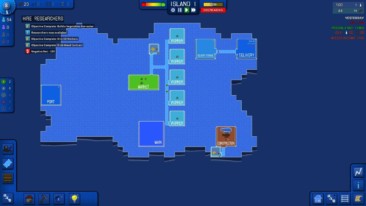