The king commands you dig, and dig deep. Return to him the treasures buried beneath the mountain and he will reward you greatly…or he won’t. He’s fickle like that.

Delve Deeper harkens back to a time when simple graphics and good gameplay were enough to keep us occupied. It reminds us of why side-scrolling puzzle games like Lemmings and Lost Vikings were so much fun. As the unseen overseer of a five man team of miners, fighters, and scouts you must sally forth through the mountain tunnels, mining for gold and gems, battling the hordes of monster, and grabbing chests full of ancient relics. Each member of your crack squad possesses different attributes that make finding the right mix essential for each mission. Scouts move quickly, but can’t carry much and are lousy in combat. Fighters are very slow, can carry a little bit, but excel at combat. Miners can carry a lot, move pretty well and aren’t too shabby at swinging a pick at monsters. The king is an impatient man though. He’s on a schedule, so he’s given you a time limit and a little competition. Depending on the map, there are up to three other teams working away and they play dirty. Come across a dwarf from another team and expect to do battle. Knock down your opponent and you can walk away with everything he was carrying. Have no fear though. Be it monster or a competitor you’re dwarves are too hearty to die. If defeated, they take a dirt nap for a turn then dust themselves off with a single point of health. Run them back to base camp, or to the weird little fairies that inhabit certain areas of the dungeon to be healed back to full. Once you feel a member of your team has enough loot send them back to cash in their goods. Besides base camp there, are gnomes and beholders in the tunnel depths willing to purchase your items. This is the kind of game that will quickly become the one you pickup when you’re bored and have a half hour to kill. If looks could kill, Delve Deeper has enough charm to slay a hundred gelatinous cubes. At a $5 price tag, even a few crashing issues aren’t enough to deter me from highly recommending this. So take control of your team of dwarves and venture forth into subterranean mayhem. 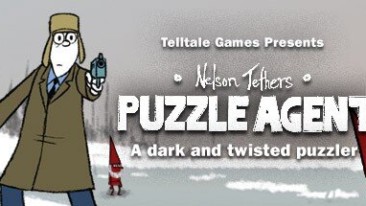 Nelson Tethers: Puzzle Agent – A Review of the new game from Telltale