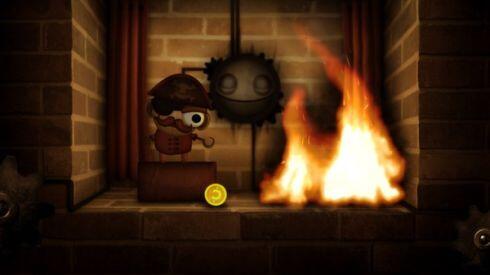 Congratulations on your new Little Inferno Entertainment Fireplace! Throw your toys into your fire, and play with them as they burn. Stay warm in there. It’s getting cold outside! Burn flaming logs, screaming robots, credit cards, batteries, exploding fish, unstable nuclear devices, and tiny galaxies.

In Little Inferno from Tomorrow Corporation (people responsible for indie blockbuster World of Goo) you wake up under strange circumstances. It seems you are trapped in a small abode of some sort with nothing but a fireplace to bide your time. Brief missives from a secret friend give you a sense that there is a greater story afoot, of which you are a part, and that tossing things into the fire will lead to some sort of cathartic resolution.

Destroying things in the fire returns coins and stamps that you collect and via which you are able to purchase new items to burn from a series of unlockable catalogs. A pervasive sense of dread permeates your every move, and you may catch yourself wincing even as you delight in subjecting new oddball items in various combinations to the flames. The first thing to know about Little Inferno is that it isn’t really a game so much as a physics simulation toy with a nebulous plot and liberal sprinklings of black humor. As the title points out early on, there aren’t points, time limits, lives, enemies, or even really objectives in the traditional sense. All you do is buy stuff from catalogs, burn it, collect the money that drops, and buy more stuff to burn. That’s it.

The second thing to know about Little Inferno is that the act of tossing toys that are basically macabre punch-lines into a fireplace is actually a pretty good way to pass the time. The combination of watching things burn and figuring out the game’s various item combos (the closest thing to a point the game has) is strangely compelling. It’s easy to accidentally spend an hour or two tossing stuff into a fireplace. As an avid gamer married to a woman whose interest in video games began and ended with Super Mario Bros. 3, I must often justify spending hours in front of a computer in what, on honest reflection, is probably not the most profitable or efficient use of my time. Some games are easy. Multiplayer shooters are almost social events. Strategy games have an intellectual air about them, like chess. Games with interesting plots or exceptional graphics are just like watching a movie. Little Inferno, on the other hand…

Two large dogs lay on a couch next to a woman sitting with a laptop. A couple of fat cats chase each other into an adjoining room, where a dashingly handsome man sits in front of a computer, unblinking.

Woman: What are you doing?

Woman: Do you want to watch a movie or something?

Man: Maybe later. I’ve got to get this review done.

Woman: (entering the room) What’s this game about?

Man: …well…you sort of order stuff from a bunch of catalogs—

Man: –and you throw the stuff into this fireplace.

Man: Yeah, and like some of the things do different stuff, and there are combos that you try to figure out and…yeah.

Woman: Oh, so like when you get a combo you get more points or something?

Man: Well, you get more money, and you get stamps.

Woman: Oh, so you, what, win the game once you get enough stamps?

Man: No, you just use those to buy more stuff to burn. You don’t really win or lose or anything, it’s not really like a game.

Man: Well, you can try to figure out all the combos, and they’re sort of like…riddles…I guess…

Woman: …but you don’t really get anything for figuring them out, and you can’t really win or anything. Huh. What’s the game about? What’s the plot?

Man: Um, well, it’s cold outside, and there’s this sort of dystopian thing going on, and it’s sort of vaguely creepy but also funny in a sort of dark way. And you just kind of burn stuff and people send you letters.

Woman: Oh, so the letters are sort of the plot of the game.

Man: Well, yeah, I guess. They’re sort of the exposition part. And you can burn them, too. Woman: …but…so…(shakes head) What’s the point of the game?

I got a few good chuckles out of Little Inferno’s slightly disturbing sense of humor. I also found myself really getting into the plot. I felt a creeping sense of dread and panic as reports from the outside world became increasingly ominous, while I sat in front of my fireplace throwing toys into the flames. Lacking any other possible option, I responded to the growing threat by doing the only thing I could with an increasing sense of urgency.

On a metagame level, there’s something really interesting about breaking the rules of games. It’s tacitly understood that a game will provide a series of challenges as well as the tools to meet those challenges, leaving the outcome of the game to the skill of the player. Little Inferno offers a provisional challenge in that items ordered take a certain amount of time to arrive, and the higher their value, the longer they take to arrive, thus you must ensure that in building combos, all items required are actually available by the time you start burning things. But this becomes a challenge more of patience rather than skill or logic.

Beyond that, it is more akin to a toolset or a toy, whose engagement afford no real impact on the outcome of the game. So, the game gives you this unsettling feeling that important events are progressing beyond your control while you sit in front of a fireplace burning toys. It’s a very effective way to set the mood. And the mood fits the bizarre, dark storyline. Unfortunately, it doesn’t really do much for the replayability of the game. As attractive as it looks (the quirky style of World of Goo is irresistible) it remains more of a physics demo with a sense of humor than a game. There are messages delivered in Little Inferno about consumerism, environmentalism, even video games in general, but once you’ve gotten the message there isn’t much reason to hold on to the envelope, sadly. If you’re the kind of gamer who plays for the experience — if you liked “Dear Esther”, for instance — you probably will walk feeling like you’ve gotten your money’s worth. Otherwise, you might be disappointed at the lack of “game” here, so I will lock my rating just above center.

Get Little Inferno on Steam 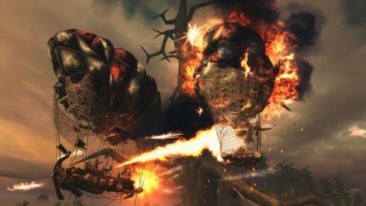 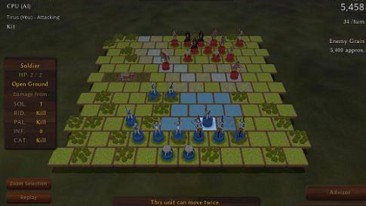