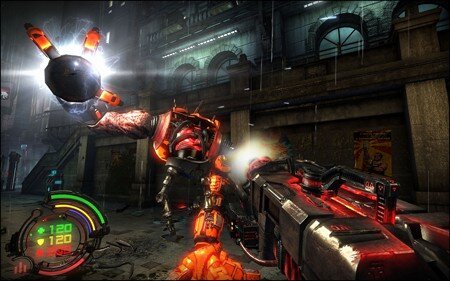 Hard Reset is an impressive indie outing from Flying Wild Hog that most certainly hearkens back to the pure adrenaline gameplay of id Software’s early days, recalling the balls out, speedy graphic engine, take no prisoners mayhem that was Wolfenstein 3d or Doom but with graphics that showcase the best of today. In other words, it might just make John Romero proud, except, being a true single-player experience there will be no deathmatches here. Read Patrick’s review below – Ed.

Hard Reset is an action-packed, single-player shooter for the PC. With over-the-top destruction, loads of enemies, great weapon variety and a beautifully realized cyberpunk setting, Hard Reset is sure to shake up the shooter scene.

No doubt, like me, you saw the trailers and previews for Hard Reset and thought that there’s no way this could be as good as it looks. Perhaps, by now you’ve played the demo and have seen that it’s truly as awesome as it appeared to be. In fact, the moment I saw the production logo at the start of the game I knew I was in for a treat (although I was a little annoyed every subsequent time I fired up the game and had no way of skipping it, but there are major developers that have yet to learn that lesson, so I’ll forgive them). When you think of a modern first person shooter, what comes to mind? Sure, high def graphics are a must, but what else?  Great multiplayer maybe? This doesn’t have any. Complex RPG elements? Yeah…Hard Reset doesn’t have that either. Instead, it does what the classics did in the golden days of the genre; a massive numbers of enemies and the right combination of cool weapons to kick their collective asses with.

Before we get into all the bits and pieces of gear and opponents, maybe I should give you some of the plot in order to set the mood. It’s the future. Artificial intelligences have rebelled against mankind and machines roam the wastes killing any human they find. Humanity has closed itself off in massive cities to wage a never ending war against this threat. You play Major Fletcher, a soldier in the military of the city of Bezoar. The sector you patrol has come under attack and you must recon the area. During your action in the sector, you discover all is not what it seems. Loyalties are put into question. Are you the future of humanity? All of this is laid out for you in some amazingly-drawn, but poorly written cut-scenes, done in an animated comic book style. Perhaps it’s just a matter of translation, but I found myself spending almost as much time attempting to figure out the meaning of what was said as I did actually listening to it. Still, it nicely compliments the gritty cyberpunk environment and doesn’t deter you from blowing things up.

OK, so that all sounds very nice (and it is), but it’s not of vital importance. What really matters is that it paves the way for a jaw-dropping setting. William Gibson and Ridley Scott would both weep at the visual depth of Hard Reset. Monitors, vents and scanners dot nearly every surface, covered in grit and graffiti. Consoles beckon for you to come closer then blossom into holographic advertising when you approach. Advertising blimps float overhead and flying police cruisers zip past. Despite the fact that you’re just a guy with a gun blasting away at wave after wave of opposition, you get the real sense of a living city that was brimming with people, mere moments before. Hard Reset easily rivals the graphics quality of AAA titles and ran smoother than most of them. Death comes in many sizes. Balls on legs with chainsaws that fondly reminded me of the mousers from Teenage Mutant Ninja turtles rush you by the dozens. Robo-Apes charge and smash you from every direction. Humanoid robots fire plasma bolts and explosive rounds. But above and beyond the mobs of mid-level enemies are the bosses. Epic creatures that stand taller than buildings and rain havoc down upon you. It’s never a complex puzzle to defeat them, but the scale and spectacle of it makes you feel like you’ve accomplished something. So let’s talk weapons. They come in two basic varieties: one kinetic and the other energy. Either can transform into your typical assault rifle, shotgun, grenade launcher and rocket launcher type configurations, when unlocked, and I do suggest you pick one and try and stick with it, because you’ll want the heavy firepower asap and it’s only available after many unlocks. It all depends on whether you like your weapons more traditional or crazy-futuristic. Both weapons can also be upgraded beyond these simple transformations. Quicker rates of fire, alternate ammo choices, laser guidance systems and much of the other fun stuff you’d expect are all available for purchase. You too can be upgraded and augmented with better radar, greater damage resistance and shielding, etc.

If Hard Reset has any failings it’s its length. Even with a fair bit of exploring, I finished the game on normal in about five hours. The ending is abrupt and without closure, so I can only hope there’s DLC on the way and at the asking price it’s still well worth the buy. I hardly ever find myself replaying this sort of game after I beat it, but immediately started over in insane mode here. There is so much potential for further development, both in the game and with it’s publisher Flying Wild Hog, that I can’t wait to see what they do next. The sudden and open ended conclusion of Hard Reset leaves them very open to sequels. Will there be direct additions to this one, or will they, smartly, add more complex elements to the mix? I understand that this game was built under the restrictions of a small team, but blending in espionage elements like sneaking, hacking, lockpicking, etc. would allow this title to easily compete with the likes of Deus Ex.

I, for one, can’t wait to see how both Major Fletcher and Flying Wild Hog evolve.

Get Hard Reset on Steam 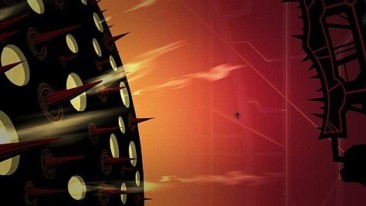 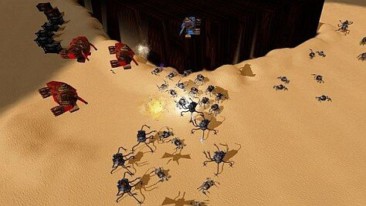