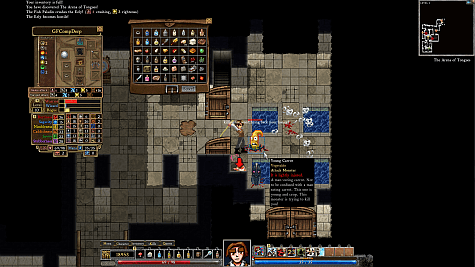 Dungeons of Dredmor Realms of the Diggle Gods DLC:

If you’ve ever wanted to get into a Rogue-like after hearing about the genre’s deep gameplay elements, it’s incredible difficulty despite the fact that it’s rewarding to players who can think their way out of a nasty encounter gameplay, yet were put-off by their typically minimalist ASCII non-graphics, then this one is for you. Dungeons of Dredmor is quite a solid entry into a growing trend to bring gamers kicking and screaming into the rewarding and hair-pulling genre of Rogue-likes by way of pretty(er) graphics. This gateway-drug-of-a-game has enough variation and life in it to contend with even the hardcore Rogue-likes, but in actual difficulty it still leans a bit on the easy side. There are, however, still those times where you can die after taking three steps into the dungeon. The game will draw you in with its fun, goofy treatment, its self-parodying humor and geek references, and it’ll keep you for the intense adventure that might ultimately unfold.

DoD is like most Rogue-likes in that it uses a turn-based system wherein every time you do something, every enemy gets to take a turn as well. However I’ve noticed very little instances where Hastes or Slows come into effect, so every move is one-for-one here. That’s not to say it’s dumbed down in the stats department, oh no. There are a wealth of cleverly named stats that each contribute to combat and dungeon exploring effects. Crit chances, counter attacks, blocking, your basics are there. But there are also the lesser-seen perception and trap-avoiding stats, various magic resistances, and sneakiness vs heavy “tankiness” dichotomies.

The same goes for damage sources; you have your basic physical types of damage, Crushing, Slashing, Piercing, and each with its own soaking types of armor. There are also way more elemental types of damage then you’d expect, including your standard elemental fire, lightning, frost, acid, but also astral, existential, and many others. (Nothing like a monster killer-Carrot to question your existential health, especially if you’ve rolled a mighty Vegan!)

There are MANY schools of magic, and taking at least one on character creation is usually a good idea. There are a good handful of Crafting professions as well, and many zany but powerful items to create. (I loves me a Pork Sword!) You will also find your typical weapon proficiencies and general adventuring skills ike Burglary, Assassination, Berserker, and Vampirism, just to name a FEW. You’re allowed to pick seven, and each of those seven come with their own sets of skills for which you get to unlock one every time you level up, in addition to a base skill just for taking it as part of your class when you take your first step.

If you take Archaeology, for instance, you start with an Indiana Jones Fedora hat and, later on, if you level up you can get a skill called, “It Belongs in a Museum!” which allows you to trash a unique item for free experience. Some skills even passively give stat boosts as you level them.

The only catch is that once you’ve picked your seven character-defining class skills, they can not be changed. So if, for example, you took Axes as your weapon skill, and later find a really nice Sword, you can use it, sure, but – you won’t be all that great with it as you would with a similar Axe. Or, if you choose an Alchemy-based crafting skill, but come across a lot of really cool Smithing or Tinkerer crafting recipes, you’re SOL.

In with the new

Recently where was a new expansion added – sorry, DLC for you young’uns – that has added a lot more variety, new class choices, and fifteen more levels to the dungeon, as well as a new female hero character sprite. As you may never even descend that low into the dungeon, you may never actually see those new levels. But if you play smart, and work your way down carefully, you just might get to experience some of the meaner content. The much more diverse beastery in the upper levels is a much welcome improvement. And if you’re a Vegan (my most successful prospect so far), the new enemies are quite needed as you shant lay a hand on your animal friends. If you’re a Demonologist, be prepared to face demonic enemies sooner, and with more ease, as you’ll be more adept at besting them. If you’re a fan of the Companions in Skyrim, you could try being a Were-Diggle and use the power granted to you in short bursts as a monster Diggle. Even if you played the game when it first came out, with all the new content, everything is bright and shiny again, and you’ll hardly recognize the “vanilla” version.

Like I said, whereas most Roguelikes are ASCII-based and represent your character and enemies as punctuation and colored letters, DoD has some very well done sprites with smooth animations by Chris Triolo. Enemies die, pop, melt, and explode under your attacks, and the dungeon itself is decorated with many humorous displays and doodads. Every skill in the game has an appropriate and lovingly crafted icon created for it, and just about every item in the game has its own unique icon.

There are some little touches with the HUD that tickle me pink. For example, if your attacks are granted extra elemental effects, then they show up on a list on your character sheet. But if you have more damage from different types than would fit onto the stats window, then the display changes to show an extra piece of paper taped to the side with Scotch Tape to show the extra stats that would not fit. When you level up you’re treated to a splash screen of a grand old “YOU’VE LEVELED UP!” marquee, along with your book of skills which you will soon be opening to choose your new ability.

Where there is FUN…

There is something satisfying about charming a Boss enemy, who has an aura of extra power, and then watching as it rampages against its former allies. But as with any Rogue-like, you’ll soon come to terms with the phrase “Yet Another Stupid Death” (YASD), be it from drinking a potion that turned out to be acid, walking onto a teleporter rune and finding yourself surrounded by zombies in space suits, or walking across three falling rock traps in a row without paying attention to where you were going. Remember, it’s the Perma-Death that makes the game both tense and rewarding.

Getting farther and deeper is so much more exciting when your adventure could be cut short for lack of not being careful, and the risk vs. reward of using that health potion now, or waiting until you REALLY need it, really comes into consideration. Having said that – no, saving 99 Mega Elixirs and never using them won’t get you very far here, because they won’t do you any good if you faceplant into a pool of acid. Getting deep into the heart of the dungeon truly feels like an accomplishment, and when you die, you can show off a recorded high score to compare with to your friends… as written across a tombstone.

I also want to make a quick mention about the score:

The music, presumably by “audio specialist” Matthew Steele, has so much personality to it, that I would listen to the soundtrack as a stand-alone contempory jazz session when I want to kick back and mellow out. The tracks are also substantially long enough that my favorite peices don’t end before I’m done enjoying them either. You can check out and download the Dungeons of Dredmor soundtrack at Bandcamp.

Out with the old

I’m really glad that I waited until after the DLC launched to complete this review. At launch the game was plagued with crashes to desktop that would effectively “kill” your character, which obviously made progression daunting, if not impossible, and with the same old enemies over and over on the upper levels, it got older, faster. But now, I think it’s right where it should be. There is even room for more classes and abilities to be added in, and I would welcome new DLCs, if they were forthcoming.

Gaslamp, the micro-indie that it is, has successfully created a witty, fun adventure that will open the door for players who might not have tried a Rogue-like otherwise. It is definitely worth the less-than $5 entry fee they are asking for admission.

A must have for any adventurer, and worth it, for the price, for anyone else who may be at the very least a bit curious.