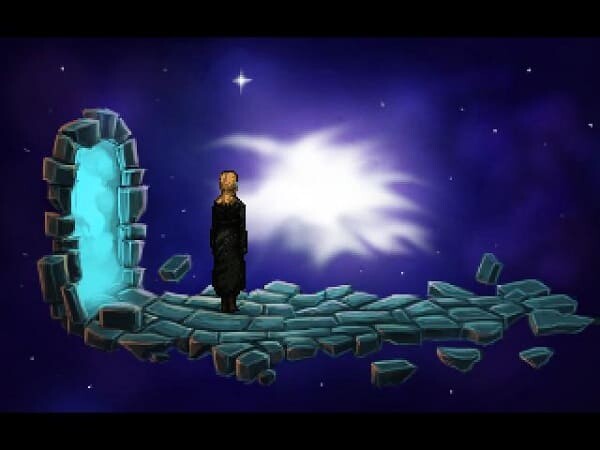 The Blackwell Epiphany – What We Think:

While another of our reviewers covered The Blackwell Deception (link to our review), a previous chapter in the Blackwell saga, the Blackwell Epiphany is the first that I’ve played. Wadjet Eye claims that the final chapter can be played as a standalone adventure. I’m pleased to report that although some references to past chapters went over my head, it never derailed from the experience.

In fact, The Blackwell Epiphany is a true standout in the point and click adventures genre. The gripping supernatural thriller skillfully delivers an intelligent story that is touching and compelling, even to players new to the realm of the titular character.

Once More, With Spirit

The game begins with Rosa Blackwell standing on a dark downtown street corner, sipping away on a coffee. A freak blizzard has kept most folks confined to their homes. Accompanying Rosa is Joey Mallone, a deceased mobster who works alongside Rosa, as he has alongside women from many generations of the Blackwell lineage. Rosa, like her forbears, is able to see and speak with spirits, so no one else is aware of Joey’s presence. Together, the duo tracks down wayward spirits, convinces them of their passing, and guides them on their way to the next world.

The pair get a phone call from a police contact who provides them with information about a potential lost soul. As Rosa’s work takes place outside the realm of rational thinkers, she and her connection must conduct business on the down-low. Rosa gets results, but her methods have earned her a few enemies.

After a suitable introductory stage, in which the game’s puzzle solving mechanics are taken through their paces, a seemingly random gunman appears. He fires past Rosa, killing another man on the street. His soul emerges, but as Joey is preparing to help him find his way to the other side, he begins to scream horrifically. The duo watch helplessly as the soul is torn apart.

As evidence about the murdered man surfaces, it becomes clear that more souls face a similar fate. Ultimately, the destiny of thousands of beings, both living and dead, hang in the balance. Rosa and Joey’s latest mission will also prove to be their most vital.

Duo Do Not (There Is No Try)

The series gives a welcome twist to puzzle solving by requiring Rosa and Joey to work together to unravel the correct path. Joey’s presence comes in handy when it comes to locked doors, as he can pass right through them, provided Rosa is within a certain range. Once inside, he can really only run recon: his less-than-corporeal form prevents him from manipulating most physical objects, though some lighter ones can be moved if Joey blows on them.

Rosa carries the team’s inventory, and is able to communicate with living witnesses. She can also use her phone to compare clues and talking points to uncover connections and new potential clues. Only by properly addressing situations from both perspectives can you proceed to the next ordeal. Some of the puzzles may have you scratching your head even after you’ve solved them, but for the most part, the logic is solid and straightforward.

It’s All A Blur

As with the preceding chapters, don’t expect any high res textures in Blackwell Epiphany. The resolution is a scant 640 X 480, with no options to increase the pixel count. Regardless, the art design is vibrant enough to make maximum use of the screen density, resulting in a visual experience reminiscent of Sierra On-Line’s Gabriel Knight: Sins of the Father. Dialogue sequences are handled by having the speaking character’s bust appear next to the text, and a variety of emotions are conveyed by each to suit the script.

The swarthy jazz soundtrack creates a sensation not unlike how Joey Mallone must feel: slightly floating and constantly bobbing up and down in place. The near-vacant city seems to slowly breathe in and out as the music plays.

Dying is Easy. Acting Like You’re Already Dead is Hard

There isn’t a weak link in the voice cast. Each of the numerous characters delivers all lines with genuine passion, and it tightens the effectiveness of the overall narrative. There are moments when the interactions between characters elevate this into the realm of high drama. Without spoiling any plot details, I’ll say that the final lines in the story are made all the more memorable by the subtle and organic vocal delivery.

My one complaint with the voice work: it would be nice to have some variety in “failed attempt” responses, especially when employing Joey’s limited range of tactics. Hearing him repeat “I’m not going to blow on everything I see” in the exact same tone of voice got old, and fast.

Wadjet Eye are to be applauded for the conclusion to the Blackwell saga. Even though I had no prior experience with the games, I was gripped totally by the plight of Rosa, Joey, and the unfortunate souls caught up in this chilling jaunt between this world and the realm that awaits. While headier narratives can certainly be found, this tale is delivered with a level of skill and delicacy that place it head and shoulders above most other titles in the point and click genre.

By the conclusion of the story, I was determined to play the original four games. This is partly because I now want to know the lore that brought Rosa and Joey to this conclusion, and also because I find that I really want to spend more time entrenched in the mythos of this masterful supernatural thriller.

If you crave a great mystery bursting with heartache and horror, look no further.

Get The Blackwell Epiphany through Steam

Watch the launch trailer for The Blackwell Epiphany: 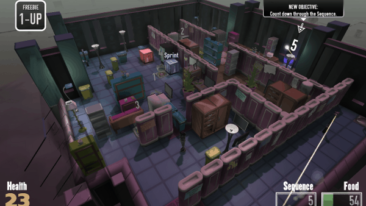 Review: Not The Robots 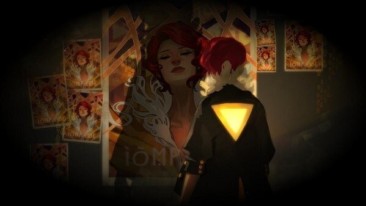