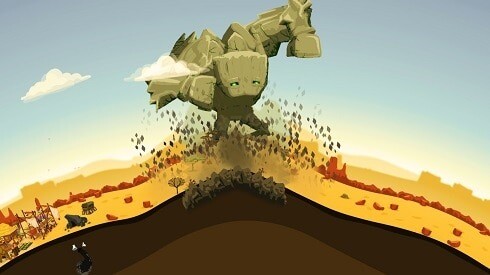 Reus is a new ‘god’ game with a divergent, yet wonderfully pleasing look and feel to it. While on the surface, your actions will decide the fate of the human race, at its core, the experience conjures up some elements that puzzle and match-type game enthusiasts may well find appealing. Slightly akin to Peter Molyneaux’s Black & White, you command a quartet of giants who assist you in shaping your world. But while the giants are ever-present, they are not necessarily the focus. They serve as your hands, and how you interact with your world.

As you begin a new game, your giants awaken to a barren globe. It is a full planet, but presented on a 2D plane. Your first job is to terraform strips of land so that humanity can survive and prosper. You can generate deserts, swamps, and forests. Different biomes attract people of cultures distinct in how they utilize that land type, and advance though their own stages of wants, needs and technology.

The ultimate goal of the game is to make all human villages as prosperous as possible before the time limit in a session runs out. Once time is up, your giants get tired and return to the earth to slumber. The actual mechanics of the game revolve around building combos with the objects you place for your villages. For example, in a forest, your people will want massive amounts of food, so you’ll be looking for combos such as deer, grazing on shrubs; the presence of these two items together will result in a higher food yield than if these elements were found separated from each other. In deserts, on the other hand, your people will want more minerals and wealth. There is a trick to getting everything to balance properly and your focus should be on finding combos that best fulfill the requests of your people.

Want versus Need, Man Versus Giant

The game can be slightly emergent, but only when things start getting out of control. If you keep the growth of all the villages on the planet stable and even, you won’t need to worry about different groups going to war with each other.

If, however, you favor one village too much and give them more resources than they need, they’ll grow too fast and become greedy. They’ll go to war with their neighbors or even demand more from your giants. Eventually, they’ll attack them, and if you don’t make them settle down and a giant gets taken down, your session end as a total loss.

At the end of every session, you are awarded classic console-style achievements. These achievements will actually unlock new abilities to be used in subsequent sessions, allowing you to make even more prosperous civilizations, thus netting higher scores. You’re given sample lists of tasks you can work towards, and keep track of what you want to accomplish in a given session. Some examples would be to have one village be the only one with a high amount of prosperity compared to the others or have one village be successful without using any of one of the 3 types of resources. (Plants, Animals, or Minerals) There is a lot to love about this game: The world is brightly hued, villages teem with busy denizens, the mineral veins, flora and fauna you seed across the planet are vibrant and diverse. The giants fit in naturally across the backdrop of the landscape, serenely watching over the people who harvest the valuable resources that have been created. And there is something strangely satisfying about creating a horde of bunnies that combo off each other to make an abundant source of food.

Reus is a great example of a game that shines brightly within the chosen aesthetics. The choice to go with a god game theme makes it work where it otherwise might have been less interesting in a different skin. All in all, the actual gameplay is a very simple task of matchmaking to keep up with varying demands. And yet, it’s quirky and involved enough to make you feel for your people and care for them, even though they will only last from a few minutes to a couple of hours.

If you are looking for a simple sim game, or even a puzzle game that is something beyond dropping blocks, you should give Reus a look.

Reus is available via Steam. 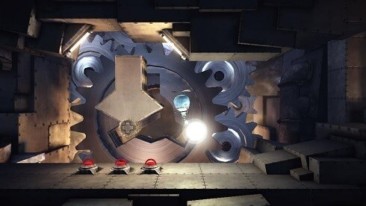