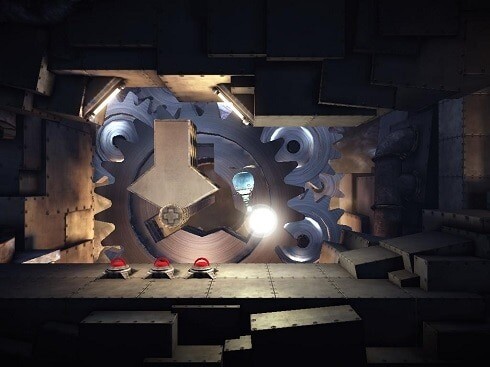 One day, whilst out with friends, a tiny robot is captured and sent to a shadowy underground network of tubes and wires. As he flies about looking for an escape, it becomes clear that his prison is more than it appears to be. If he ever wishes to see the surface again, he will have to solve the complex mysteries that are littered throughout his apparent captor.

Unmechanical features a great number of engaging puzzles to solve. The art design is the real hook, and Talawa Games has done a fantastic job creating an alluring inner mechanical (and yet strangely organic) realm that aptly conveys a sense of enormity.

A claw trap from underground snatches the robot from his lush, green realm, and he is dragged through a massive series of pipes. After this initial capture sequence plays out, the player gains control of the robot.

The game plays as a strictly 2D scrolling game, though the visuals have a rich 3D quality to them. The robot can fly in any direction by using the arrow keys or the left analog stick on a controller.

Either mouse button, or any face button on the controller will engage a kinetic from beneath the robot. This can be used to snag and carry items, or the power up certain sensors. Many puzzles will require carrying objects to complete various tasks.

Throughout the journey, it becomes clear that the hero isn’t alone in this ancient tomb. Is this other presence friendly, or could it be the one behind the kidnapping that initiated this quest? Repeatedly, the other entity quickly vanishes seconds after being spotted, adding yet another layer to the mystery.

Initially, the completion of tasks will only lead the robot deeper into the cavernous expanse. Accessing new areas will generally involve solving the restrictions of a series of machines that will in turn help to engage part of a larger mechanical construct.

With the number of puzzles to solve in Unmechanical, it’s noteworthy that so few of them feel in any way similar. Some will require manipulations of switches and levers, while others will rely on a quick precise movement response from the player, while others require combining several elements in a room.

With the high degree of variance and difficulty in the game’s obstacles, some players are bound to hit snags. Fortunately, the robot comes with a hint instinct feature. Triggering this will (sometimes) display a still-image glimpse of the bot’s mind, indicating what must occur next. These images are purposefully vague, but often provide just enough to get the ball rolling when confusion grinds the gears to a halt.

Only a few of the puzzles really had me scratching my head beyond the hint feature, and once I finally did solve these, it was quickly followed with a sound palm to the face for not spotting the solution sooner.

Unmechanical is a strictly wordless affair, and yet progressing through the journey spins a somber, though hopeful tale. Sound, music and, often, the absence of both are huge contributing factors to the ambiance. The grinding of machinery, both that of the maze, and that of the protagonist echo against cavern walls, further hammering home the sensations of vastness and entrapment.

This sparseness of undue chatter also allows the stunning 2.5D visuals to dazzle. The level designs all burst with intricate detail: virtual spiderwebs of cold, sterile pipes dully glint against a dank, dimly lit subterranean hive of catacombs. Crumpled automatons, seemingly dormant, will suddenly lurch to attention, twitching like addicts. Talawa Games made excellent use of Unreal Engine 3 crafting a realm that, while mainly automated, still manages to flaunt a subtle spirituality.

There isn’t a great deal of choice in how the game is played, save for two possible endings, and both of these can be accessed from the final auto save point in the game. The rest of the journey follows a fairly linear path. Moments where a puzzle solution isn’t clear may lead to some limited back-tracking, but these frustrating moments do more to take the player out of the narrative than to create a feel of curious exploration.

The game also felt a bit short; with the impressive lead up, the point where the credits rolled felt more like it should have lead to another subsection within the giant…whatever it truly is. This could really be seen as praise, as I genuinely wanted to unravel even more about this bizarre realm that I had started to regard as home.

The standard collection of achievements flesh out the replay value of the game, making for a captivating experience, if not an overly robust one. And yet, for the brief time solving clever puzzles amidst a thoroughly engrossing backdrop, I happily give Unmechanical a 4 out of 5 star rating.

Get Unmechanical at Steam

Get Unmechanical at GamersGate

Get Unmechanical at GOG 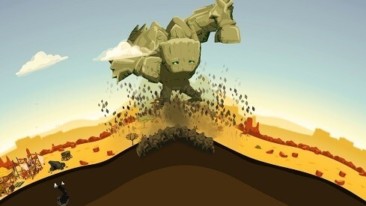 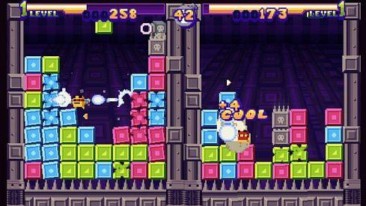