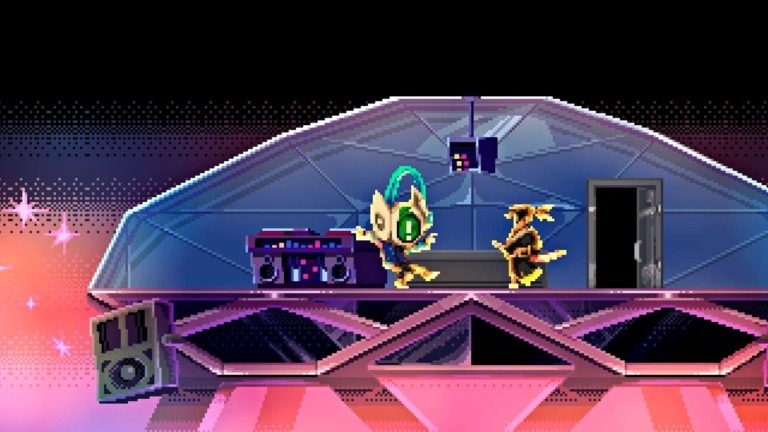 Every now and then a game comes along that makes you scrutinize how you think about the medium or how you approach games in general. Katana ZERO from Askiisoft does this to a certain extent, but unfortunately not to its own benefit. It has style emanating from its pores with gorgeous art and superb animation, but beyond that, it feels as if it’s grasping for something that doesn’t quite come to fruition.

Katana ZERO is a mash of inspirations, with the hyperviolence of Hotline Miami foremost among them. It blends so many aesthetic styles from cyberpunk games like The Red Strings Club and Furi.

It presents itself through a kind of neon-noir lens with a melancholic piano melody greeting the player at the menu and stalking them in between levels. It’s a beautiful piece of music, but the contradictions start here when the player goes into a level to experience the pulsating electronic fare of the main soundtrack. 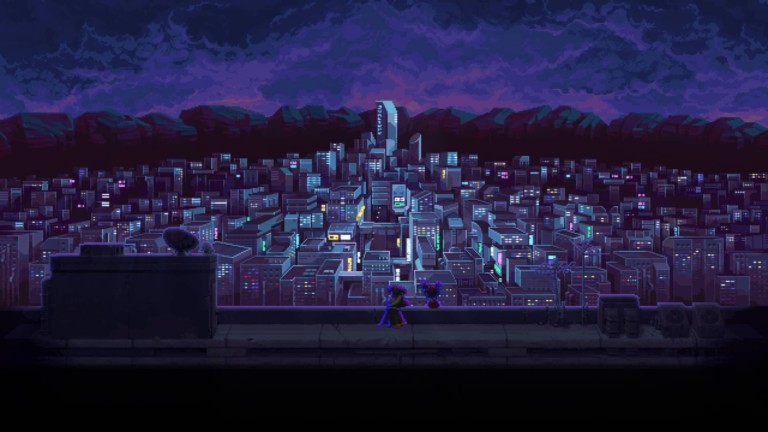 The player takes control of a contract killer with the ability to rewind time upon death. And death does occur frequently, as any hit upon the player spells doom. Players face clusters of levels which can lead to a frenetic boss fight but more often ends in a cryptic and slow unveiling of a plot concerned with a drug called Chronos.

This drug is the clever framing device that Askiisoft has placed around the concept of player death in the game. It’s an interesting framing device and the story focuses as much on addiction as it does on the consequences of having this ability.

Everything in the game looks beautiful. The animation, in particular, is fluid and translates well to the action. That you can only take one hit really feeds the style in a player’s actions through a level. Bullets can be deflected back at enemies with a satisfying motion, and bullet time a major help in achieving such a feat.

Because the attacks of the player are primarily melee, it makes the dodge roll really satisfying as a maneuver that gets the player closer to an enemy, ignoring their attacks. The combat is all so fluid that I almost resent the video at the end of a level showing you your accomplishments at full speed, like a Super Meat Boy retrospective. It’s something that breaks the pace ever so slightly, even if it is a nice feature.

But this isn’t the only place where that happens. 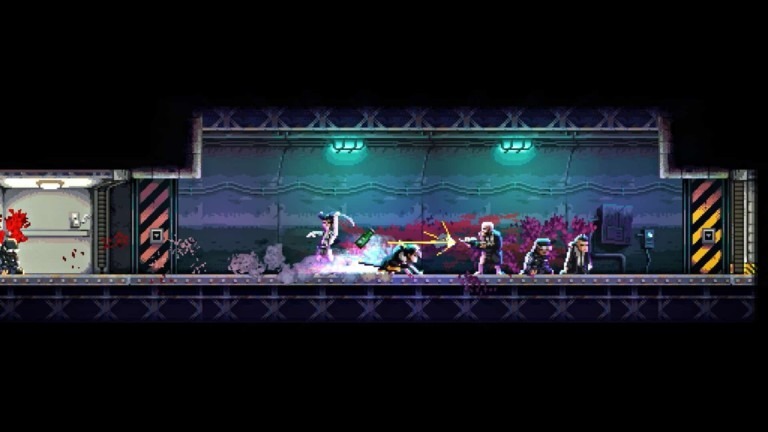 In between levels, the pace will slow right down for the player to engage in conversations with an array of characters. One of these characters operates as a paradoxical therapist/drug dealer. Reactions from this character can swing wildly from calm and reserved to a screaming mess.

This display in swinging, emotional excess is typical across an array of characters in the game. It would be bad enough if these kinds of characters were regularly placed in a game where dialog was the main point of interaction, but Katana ZERO dispenses with any notion of pacing through the dispersal of these scenes in between its tense action pieces.

I’m reminded of Not a Hero from Roll7 where levels were followed with relaxed diner conversation with the BunneyLord character. But in that instance, it was such a surreal break in the pace that it added to the comedic effect of the whole scene. In Katana ZERO, a satisfactory pace is always broken by something. 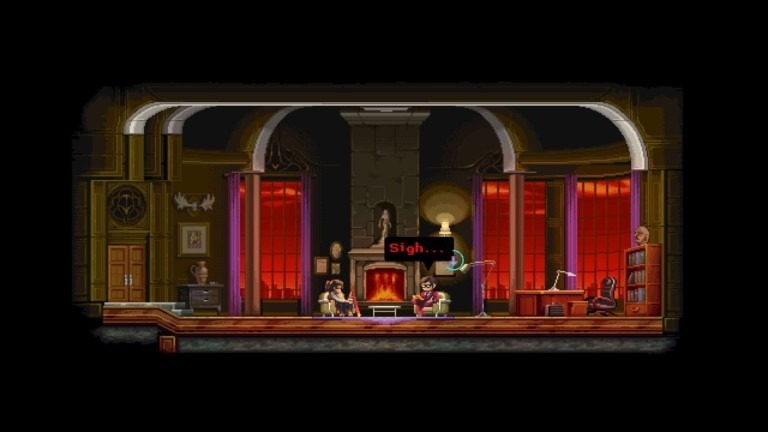 The slow reveal of plot information runs in contrast to the hyperactive action the player is tasked with: another jarring element. This condemnation for a game in which physical movement flows so well and adorns such style feels like a disservice, but there is a tangible failure to unify these elements into something which actually drives home anything of note.

It’s hard to escape the feeling that there is something Katana ZERO is trying to say about the medium and the genre it is placed in. If we go into mild spoiler territory here, the characters addicted to Chronos – the drug that affords infinite respawns, if you will – are all highly adept killing machines.

I want to say that the game is reaching past the screen to direct the player’s gaze at these hyper-violent actions and the processes we engage in when we play these games and embody these characters. But if it is trying to do that, it doesn’t hold that mirror steady enough. The game is a mess of great individual components that don’t link up well. 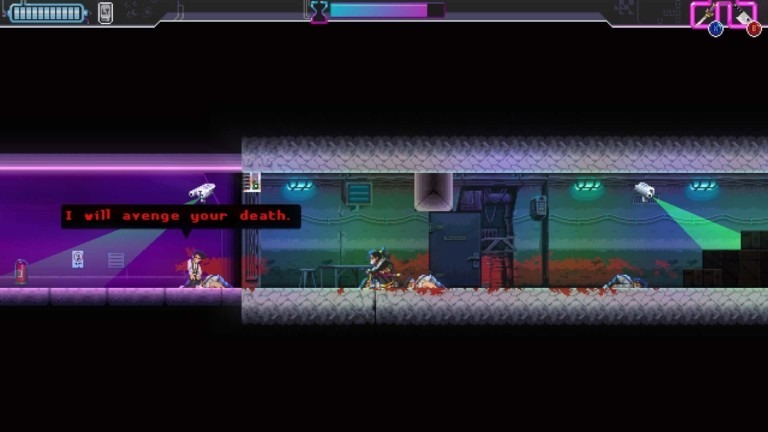 Katana ZERO pulls at something here and pushes something over there, but it never coalesces into a cogent piece of work. The way dialog appears in text boxes is a breath of fresh air, with a great option for players to interrupt characters. But the characters themselves are strange hybrids of noir stereotypes and hyper-violent video game tropes. These dialog sequences balance on a precipice of two extremes, which breaks its own flow and neon-noir aesthetic. It doesn’t happen all the time, but it happens just enough to break the flow and deliver a bizarre experience at times.

Demanding the Best From The Mediocre

I have found reviewing this a particular challenge. Katana ZERO is a game trying to do everything: butter-smooth combat, compelling and tragic narrative, visually arresting graphics, moments of self-parody. But it can’t pull it all together into one cogent experience.

Because it does try so hard in so many different directions, it makes you question your own experience. 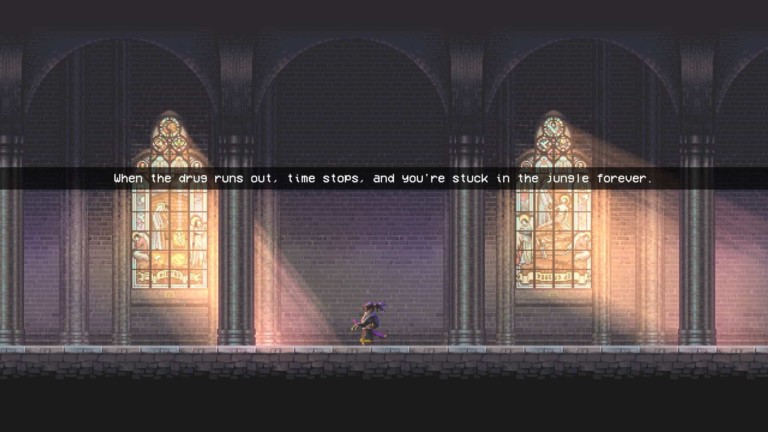 It’s an experience of contradictions, and it can be difficult to tie those all together and present the findings. This is maybe where expectations get in the way. Setting up the game with such striking visuals and enjoyable combat means it’s held to a much higher standard as it aims for greatness.

Unfortunately, it does not reach it. What I can say is that Katana ZERO entertains but it gets in the way of itself in delivering something which truly resonates.

Katana ZERO is available via the Nintendo Game Store and Steam. 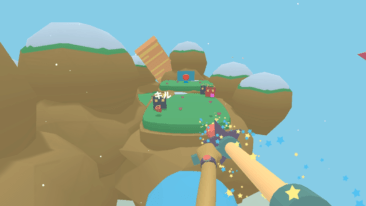 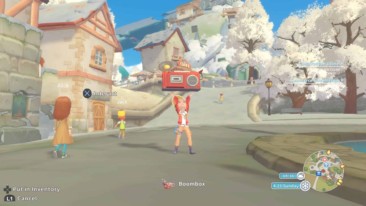 My Time at Portia Review – Welcome to the Post-Post-Apocalypse