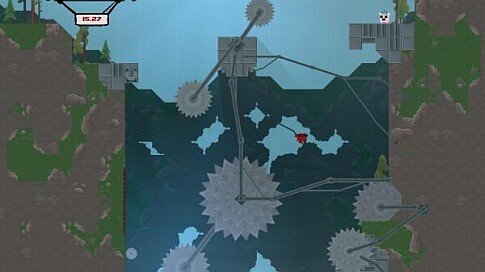 Well first of all there is the fact that SMB, developed by veritable indie game superstar Edmund McMillen (who past titles include “Gish,” “Aether,” “C*nt” and who is the central subject in the equally anticipated Indie Game: the Movie feature film coming in 2011) has had the gaming community salivating for the better part of a year and half leading up to its release.

Then there was that PETA thing where the animal-loving non-profit rebutted with their own platformer Super Tofu Boy to which Team Meat responded by co-opting the mushy soy character into their own game as an unlockable character that proved to be an impotent sloppy mess.

You are a sad little skinless creature. You’re girlfriend is a…I don’t know what, covered in bandages(?) who’s been kidnapped by your arch nemesis: a fetus in a mechanical body and a suit?!? OK, I can go with it…

The intro on start-up for Super Meat Boy kind of left me uninspired, but the moment the 16-bit logo came on screen and the low sample rate voice shouted the title I was hooked. It made me wish I had a knobby arcade-style joystick like the X-Arcade.  This is classic arcade gaming at its best. Prepare to slip and slide your meaty self across some seriously treacherous terrain in order to rescue your beloved. Spiked pits, chainsaws and strange critters all conspire to keep you from giving Dr. Fetus the thrashing he deserves. Super Meat Boy exists on two very different levels. Cut scenes are rendered in Flash-like (OK, probably Flash-exactly) clean vector lines, while in-game is a very crunchy low pixel affair. You’d think the two styles would be a little jarring in transition, but it is done with such flair that it just becomes another element of Meat Boy’s insanity. Even the stellar soundtrack follows this ideal, being rich hard rock during cut-scenes and menus then switching to an awesome 8-Bit chiptune version during gameplay. Don’t expect your cubey fleshiness to carry a firearm, do Kung-Fu, or anything else flashy; you run, you jump, you go squish. And squish you shall, all over the walls, floors, blades, spikes and anything else you happen to come across. Death isn’t a question of when for our little hero; it’s a matter of how often and how spectacularly. Herein lies half the fun of Super Meat Boy.

You see, while most games of its type are content to simply restart the level when you die, Meat Boy keeps track of every move you made and makes sure to leave your red splatterings all over the place. Add the fact that when you do finish a level you get to see all your attempts replay simultaneously and you’re looking at a lot of fun. Levels tend to be tricky enough that you’ll have to try them multiple times, but not hard enough to leave you bald from pulling hair. Once you’ve finished the story of Meat Boy and Bandage girl there’s plenty of opportunity for replay here. Attempt to complete levels in a single try and then run all the darkworld versions in an attempt to collect all the bandages and unlock all the playable characters including Commander Video from the Bit.Trip series, Steve from Minecraft (easily 2010’s biggest indie success story, and perhaps for that reason is virtually unstoppable within SMB – PC/Mac only), Tim from Braid (XBLA exclusive) and many others, making this a sort of grand tour of the indie game world glitterati. Add to that the multitude of warp zones to be discovered and you’ll find Meat and friends occupying hours of your time. As the game constantly suggests, this is designed with a controller in mind, so if you don’t have one you might want to pick one up. That’s not to say you can’t play it with the keyboard. I had to. (Game didn’t want to play nice with my Logitech and I’ll be damned if I’ll shell out for an over-priced and over-sized XBOX controller)

Speaking of not playing nice, the game was released for the PC with a large number of nearly game breaking bugs, but all were shot down in admirably quick time for such a small development team. It’s easy to see why Super Meat Boy is going to be on just about everyone’s indie game of the year list (no doubt including ours). It’s the very definition of easy-to-pick-up, hard-to-put-down. If you haven’t played it yet, you can always give it a test drive by playing the original Meat Boy Flash game on Newgrounds. It’s not as polished as its super sequel, but it’ll give you a good sense of what you’re in for.

Get Super Meat Boy on Steam

Get Super Meat Boy for XBOX Live Arcade (US Site)

Review: Pound of Ground Finds the Fun Under the Rotting Meat