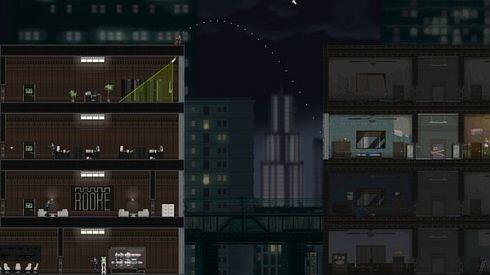 Gunpoint – What We Think:

He may not be Dick Tracy, but Gunpoint’s leading man is an ace detective that not even Mario would want to challenge – this is Gunpoint seeee, a puzzle/infiltration game wherein you not only re-wire the environment to suit your questionable objectives, but also have the ability to leap over buildings like Superman.

Three years in the making by indie studio Suspicious Developments, Gunpoint revolves around getting into a high security building, retrieving something or accessing a computer, then getting out. This can be done by following guards as they walk through secure doors and then leaping up and hanging on the ceiling as they patrol back the other way, or flipping light switches so they have to come through and open doors as they come for you.

The main mechanic at work here though, is the ability to rewire everything in the building to different things. You could wire a light switch to a door. You could wire a motion detector to an elevator call button. You cold even wire a guard’s gun to a trap door he’s standing on so it opens up below him as he turns around and tries to fire at you.

The puzzle structure for each level is set up so that you need to find a way to access new parts of a building before you can progress to the next secure room. While you may have thought about it at first, you are not actually able to just use one light switch to open every door in the building; different parts of the building are connected though different circuit systems.

This might mean that you have to lure a guard through a motion detector that you’ve wired to open a door on the next floor, or wire a light switch to an elevator call button so that a guard nearby will turn to look at the elevator as it opens, expecting someone to come out of it, while you then walk like a cat behind him to access a terminal he’d be guarding and on which he’d previously been keeping close watch.

While you can leap on top of guards to disable them to brute your way through a level, it’s not your goal, and you get scored less for being seen and for being aggressive. Between levels you can purchase equipment upgrades, new gadgets and better faster jumping abilities. For a bit of replayability, you can go back to older levels to get as high a score as you can in speed, stealthiness, and non-aggression. All Signs Point To “Yes”

In addition to some branching text-based cutscenes featuring simple graphics, a neo-noir, loungey soundtrack supports the snooping heist theme and the storyline which in turn fits very well with the game’s objectives and mechanics; it’s a world that makes sense and the various elements play nicely in concert. Fans of Klei Entertainment’s Mark of the Ninja will feel right at home here. Rounding things out, the game has a built in level editor, for even richer mucking about.

Gunpoint is an engaging multi-genre title that feels as much like a sandbox playground – offering a wide range of solutions, thus encouraging creativity on the part of the player – in a cool-as-nails backdrop.

Get Gunpoint on Steam 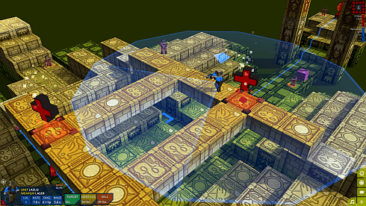 Review: The Yawhg – Gets Better With A Little Help From Your Friends