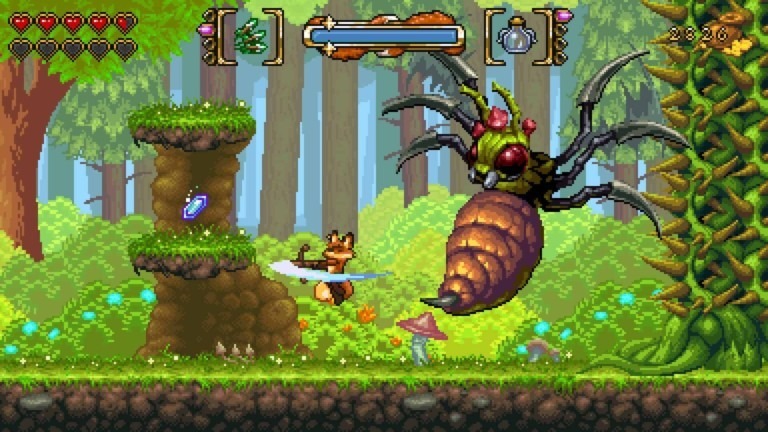 Disclosure: Reviewer is a Kickstarter Backer of this game.

The recent fad has been retro this, pixel that, modern 8-bit, etc etc etc., but FOX n FORESTS promises something more authentic.

While games like Dungeon of the Endless or Risk of Rain are pixellated and retro as a stylistic choice, FOX n FORESTS wants you to feel like you’ve just plugged in ActRaiser, freshly rented from Blockbuster, with the task of completing the game over the weekend before having to return it on the way to school Monday morning. FOX n FORESTS nails this often reached-for feeling, largely thanks to the quality sprite work and music that matches the sound of the era.

Fox and Forests is a classic platformer with eight levels and five bosses. While that may seem short on paper, the length of the levels makes up for their single-digit count. Each level has its own personal theme and takes full advantage of the game’s main mechanic: you can change the level’s season – and weather – to its opposite. For example, a winter level with snow and ice becomes a warm summer. The ice and water in lakes disappears, allowing you to explore the lower portions of normally-flooded levels.

Each level’s theme is also unique; there are no reused tile sets. With each level being consistent within itself, what changes with its alternate season is easily recognizable at a glance. Once I got the feel for it, I stopped swapping between seasons after every screen, as I was able to predict what would change.

I must also point out a smart developer trick that helped with this ease of familiarity: every time something changed with a season-swap, magic sparks would draw my eye to that place on the screen so I could see the changes coming. With each level being completely different, this was a big help to quickly acclimate me to each new mechanic.

I mentioned above that the sprite work is good, but really, this game is beautiful, from the backgrounds to the simple animation of a bat re-spawning. The only thing that feels out of place are the bosses, which are large, detailed and downright hideous compared to every other creature in the game. Their out-of-place-ness could be intentional, though, highlighting their nature as things that don’t belong in the world they occupy.

Talking about actual gameplay, in short, FOX n FORESTS features large levels and solid platforming. In the beginning, you are limited to ranged shots on the ground, a jumping close range attack or a double-jump, with no option in-air for an attack. As you progress, you’ll gain an extra attack with your double-jump and more options with your crossbow. To start off so limited, though, trained me to work with what I had and prepared me for later challenges. There are a fair amount of “air brakes” that allow for tuning jumps, with platform physics and hit detection leaving zero complaints. Everything felt solid and fair.

Each level also had multiple high and low paths to take. This made going through each level more than once a bit less repetitive, as you could still find new things, but also made searching for every missing item a bit of a pain. You’re at least given a list of what objects to find in each level, so you’ll know if you’re looking in the right place.

There is also a startling variety to be found given such a small level count. The first few are huge and maze-like, but a little more than halfway through are a couple of very straightforward, no-nonsense levels that make for a nice change of pace. There are even a couple of shoot-’em-up levels.

Not everything is perfect, though; I have a few nits to pick over. After defeating the first boss and seeing no progression on the stage selection map, I thought I must be playing a demo and that my time with the game had come to an end. Going back to the game to see what else I could squeeze out of it, I discovered that going back to the second screen of the “town” hub progresses the story as well as giving power upgrades (with some delightfully cringe-inducing puns and word association jokes). Hopefully, this can be addressed with a quick patch to add a dialog box after the first boss, reminding the player to bring the item won back to the quest-giver.

After playing only the first two levels, you are also asked to find more of the seeds hidden in each level. Many seeds can’t be found the first time you play a level due to needing specific power upgrades to get to them. This isn’t so bad later on, but after having finished only two levels and one boss so far, being told I needed to replay one of the first two exceptionally long levels I’d only just finished felt like a slog. This early on in the game, I wanted to see more new stuff!

Finally, if playing on PC, there does not seem to be any way to exit the game through a menu option. Now if this were a game on a cartridge, of course you’d just click off the power. As authentic as this may be, I have to admit it was strange being forced to Alt-F4 to close the game.

A little short (but sweet) and a few nit-picks aside, Fox and Forests is solid, and I’m glad to have it and supported it on Kickstarter. Take that as as you may (with my obvious foxy bias).

FOX n FORESTS is available via the Sony PlayStation Store, the Nintendo Game Store and Steam.

Watch the official trailer for FOX n FORESTS below: 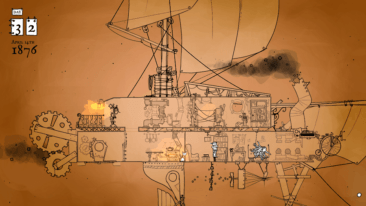 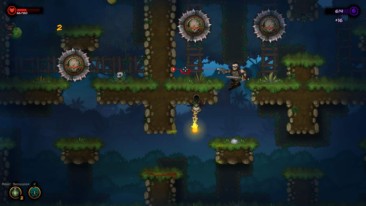