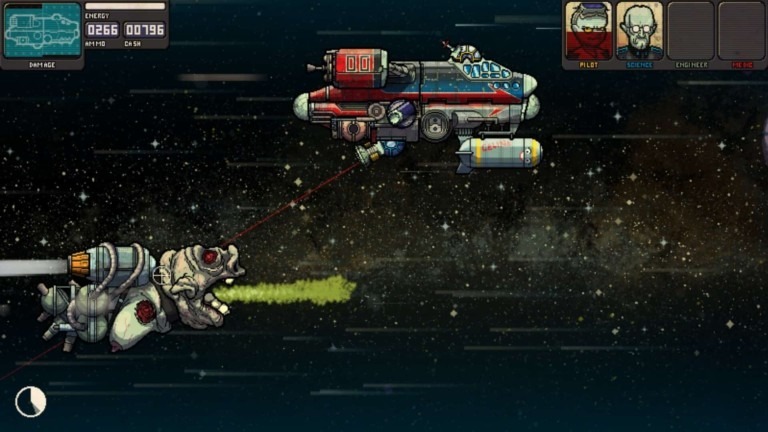 In a genre focused on filling the screen with ever more bullets, demanding ever more speed and precision, Fission Superstar X dares to do something completely different: it’s a space shooter that plods and plows instead of sprinting and skittering.

And that – along with a few light procedurally generated elements and a few ideas cribbed from FTL – makes this an unexpected treat.

Instead of a tiny, agile fighter, you’ll be piloting a massive bomber. Your own ship alone takes up nearly an eighth of your screen real estate and has roughly the turning radius of a Mack truck (in space!), so don’t expect to slip nimbly between bursts of enemy bullets.

Fission Superstar X is less a game of twitching than of positioning. Most of your enemy pilots will be able to attack you from one or two directions only, so if you’re facing off against a fighter with front-facing blasters, you’ll need to do your best to keep in back.

Your own ship is also…directionally challenged. You start off with only a couple of turrets – one each above and below your ship – so you’ve got big blind spots in front and behind you, making positioning all the more crucial. 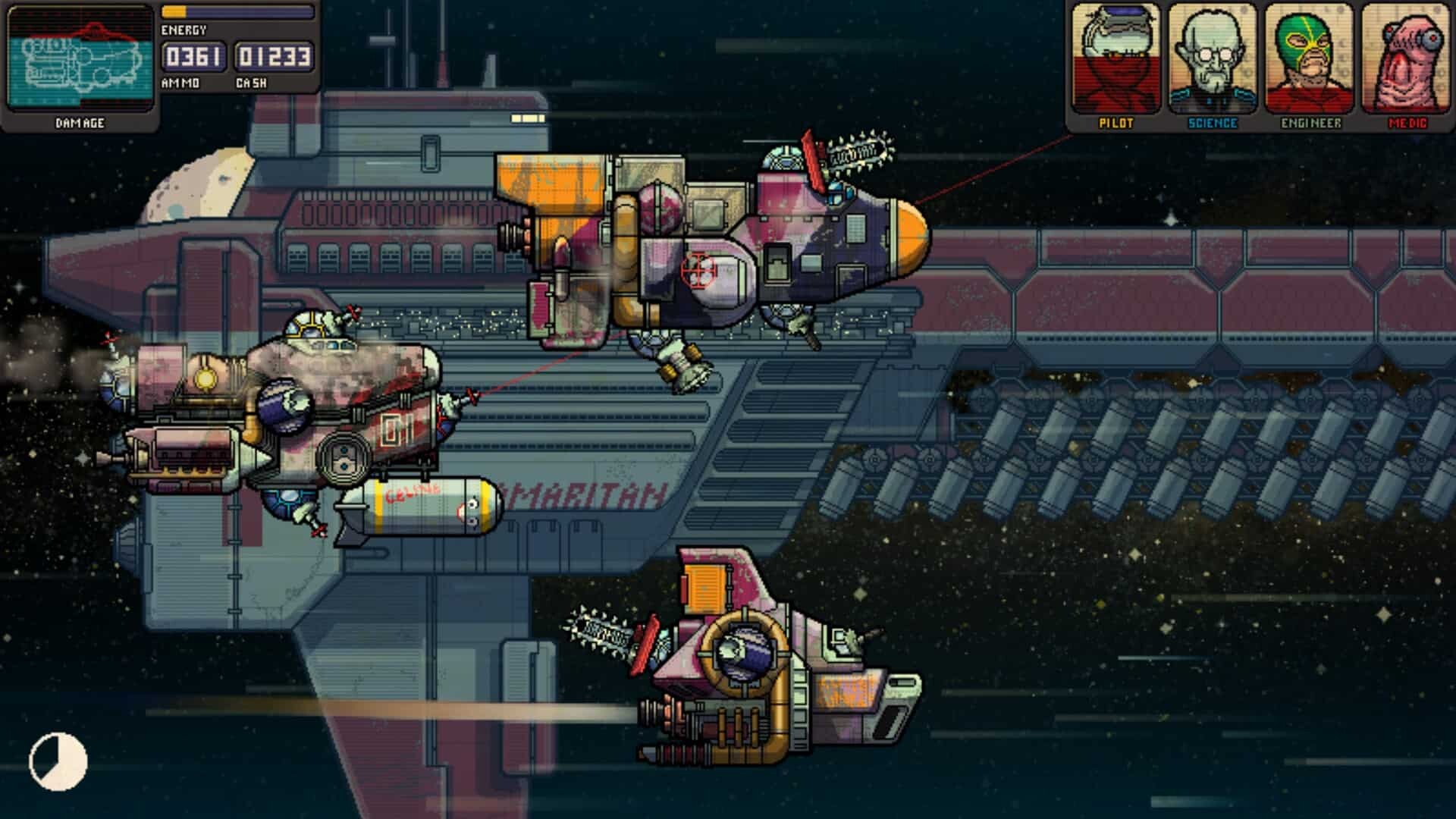 You’ve also got a shield which can double as a tractor beam, both for drawing in loot from exploded enemies and repulsing those who get too close.

The end result is a game that feels a lot less like a typical space shooter – much less a modern bullet hell – and more like a full-contact, long-distance race. It reminds me a bit of descriptions I’ve read of Tour de France riders jostling one another for position within the peloton.

Either way, it’s hardly the analogy you’d expect for a game about fighting your way through the solar system, but there you go: Fission Superstar X defies expectations.

The most interesting concept borrowed from FTL involves your crew. While you start out with a pilot and a science officer, you can also hire an engineer and medical officer.

Crucially, each crew member you hire adds a turret, so when fully staffed, your ship can target enemies from any direction.

More importantly, each crew member has a special skill – repairing your ship, upgrading your armor, or healing wounded crew members – that can be used once between each level. 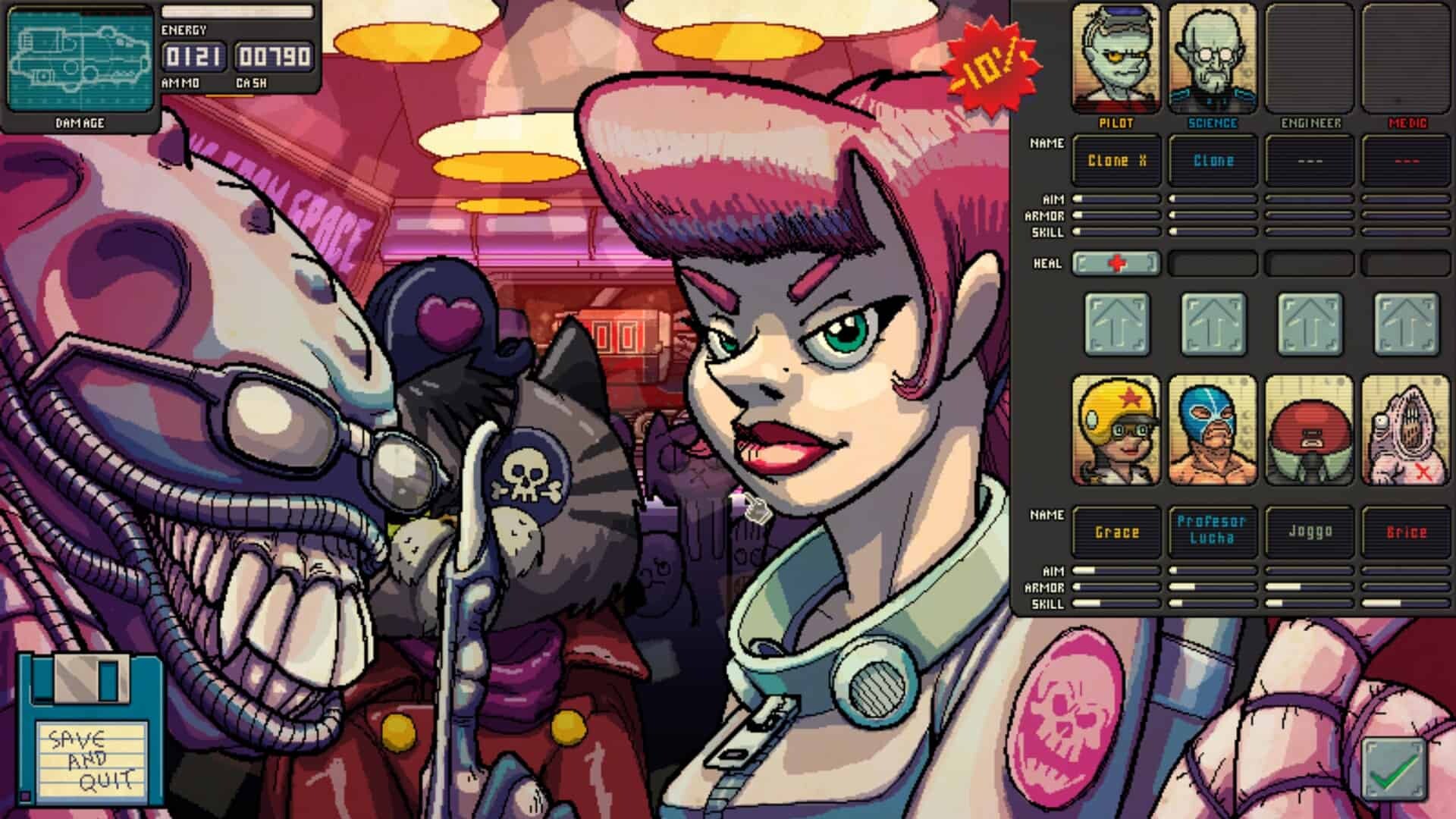 While Fission Superstar X doesn’t involve the same level of micromanagement as FTL (or games like Space Rogue that also borrow heavily from it), the crew management aspect does add a modicum of strategy, as do the other Roguelike elements taking place between levels.

After each level – boss fights excepted – you’ll typically have the choice of four paths, some of which can include various shops to upgrade your ship or hire additional crew, and some of which might include extra hazards.

The fact that you have to choose your single skill use before your choices are revealed makes each level a bit of a gamble: do you use your engineer to repair the ship, or hope that a shipyard shows up in your next set of level options? 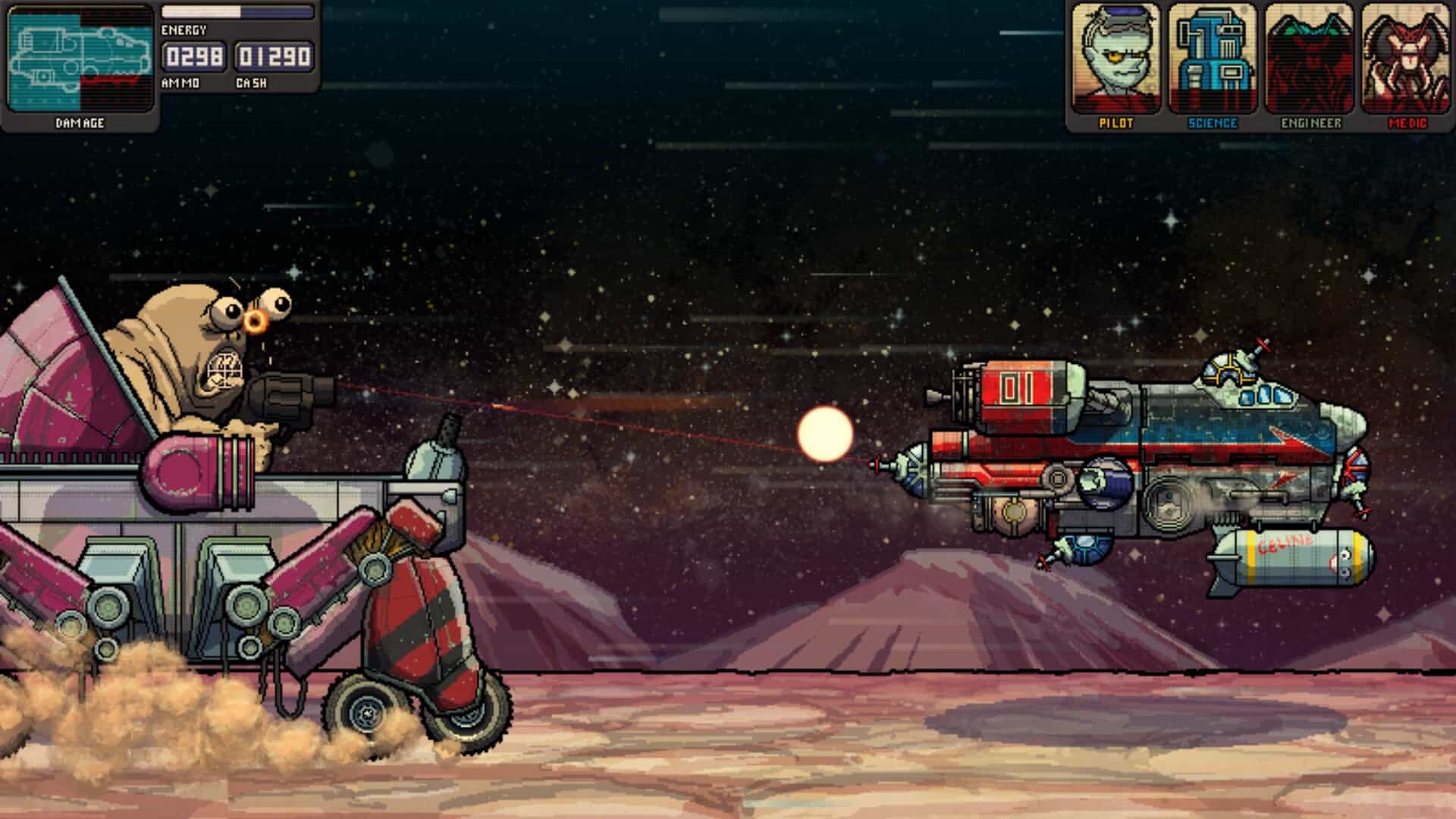 But What If I Didn’t Play Fission Superstar I through IX?

While the strategic elements and the focus on positioning over speed already make this an ingenious subversion of typical space shooter tropes, the narrative and visual approach are equally memorable.

Fission Superstar X is about two-thirds Ed Wood sci-fi cheese with a little Dr. Strangelove thrown in for flavor: your job as a cloned pilot from Planet X is to escort your mad scientist boss’s beloved nuclear warhead through all the planets of the solar system…to perform on stage and become a superstar (the mad scientist boss in question is apparently a little extra mad due to radiation poisoning). 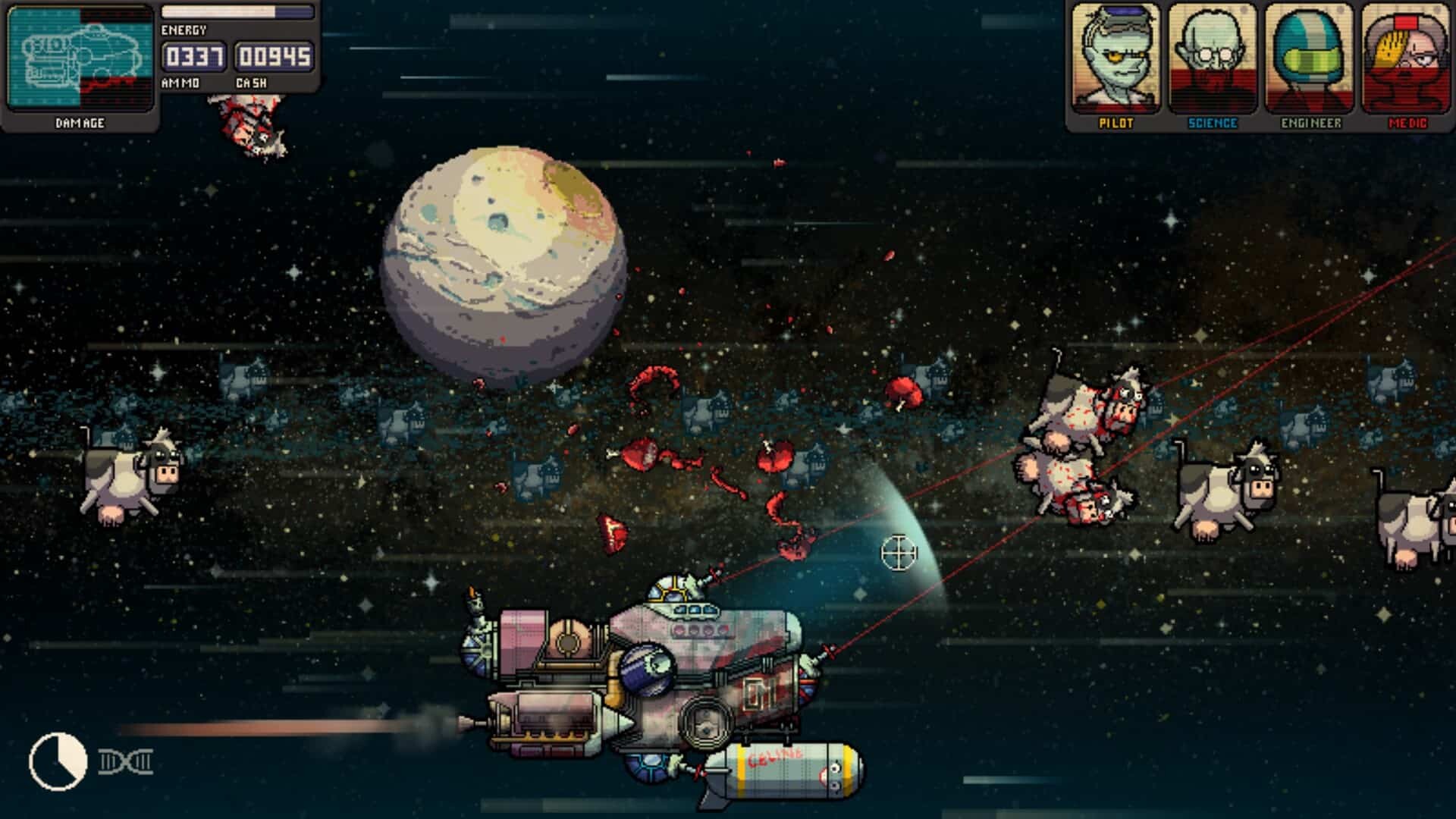 The game’s more comedic elements may cross the line into ridiculous for some players, depending on their tolerance for goofiness. Personally, I enjoyed the cartoonish art and bug-eyed alien monsters, but the levels with herds of “space cows” were a little much for me.

Still, for a game that clearly isn’t taking itself all that seriously, there’s a lot of serious, clever fun to be had here. If the constant ramping up of bullet hell games’ demands on superhuman reflexes has you down; if you need a break to rest your overworked tendons and ligaments; or if you just plain dig the idea of slow-motion bumper cars in space, maybe you can be the next Fission Superstar X!

Watch the official trailer for Fission Superstar X below: 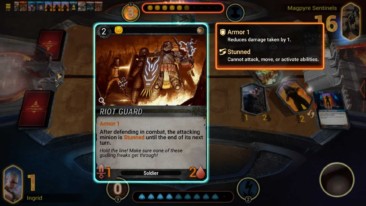 Mythgard Preview – A Free CCG Mix of Cyperpunk & the Supernatural 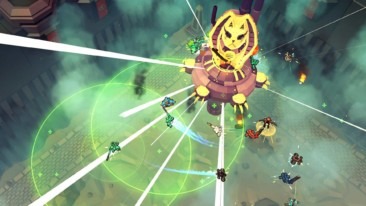