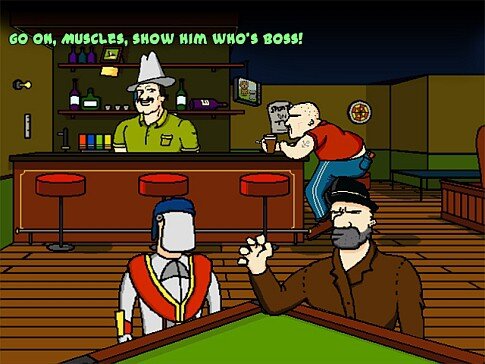 Brain – the worst brawler in the history of the Wrestle Zone – has won the title belt! Not even his team-mates Simon and Defender can believe it. But when Brain gets kidnapped (along with the belt), it’s up to them to get him back.

Street-fights, car chases, and obsessed fans all stand in the way of Brain’s rescue. But as the reluctant heroes find themselves descending ever deeper into the city’s darkest corner, they learn that their problems are only just beginning. Let’s put it this way: Da New Guys is to wrestling what Full Throttle was to motorcycle gangs. Wadjet Eye’s Da New Guys: Day of the Jackass is another solid entry in the indie developer’s stable of adventure games. If you’ve played any of Wadjet’s Blackwell series, you’ll have a good idea of what to expect from Day of the Jackass: snarky, sarcastic writing, solid adventure game mechanics, and graphics on par with classic Sierra On-Line adventure titles. Although the Toe Jam and Earl-style art didn’t endear itself to me immediately, the game does a good job of distracting you from the distinctly amateurish tone of the graphics and, to a similar degree, voice acting.

Stripped-down art and community theater vocals seem to be hallmarks of Wadjet Eye, perhaps even a conscious design choice. The graphics appear to be hand-drawn, 2D sprites, with little detail, a decided disregard for symmetry, and a conservative palette of colors drawn from what appears to be your basic 16-piece crayon box. The detail seems to be a step backwards from the Blackwell series.

Perhaps the designers felt that the art matched the tone of the story, or simply weren’t interested in higher detail. Regardless, I found the graphics distracting. Fancy graphics are certainly no substitute for good gameplay, but the two don’t exist in competition. Better graphics would have only improved Da New Guys. Although far less noticeable, the audio quality is somewhat inconstant. Voice acting tends to range from the adequate to the talented amateur. Where it, and the sound in general, tends to suffer is in the actual audio quality. Some sounds are crisp, but some clips sound as if they’re suffering from poor recording quality or mixing issues. It’s not a deal breaker, but it builds on a theme of amateurishness that might make some buyers feel a bit of remorse.

Seemingly typical of Wadjet Eye’s adventure games, Da New Guys uses a simple point-and-click control system that is easy to pick up and that works quite well for the format. As with most other games in the genre, there is a certain element of pixel-hunting, but the game largely avoids irrational solutions.

The stripped-down graphics actually help here, as most problems can be solved by the use of items which are fairly easy to locate. Good adventure games should be about problem-solving, not repetitive stress injuries, and Da New Guys continues Wadjet Eye’s tradition of keeping the game mechanics out of the way of the gameplay.

Recommending Da New Guys is pretty easy, especially if you’re a fan of the genre. While sometimes verging on the trite, the writing is charmingly sarcastic. As an adventure game, it succeeds in avoiding some of the more irritating pitfalls of the genre. However, as an indie game, it runs straight into the graphics vs. gameplay dichotomy that plagues the scene. Da New Guys won me over in spite of, not because of, its rather terrible graphics. 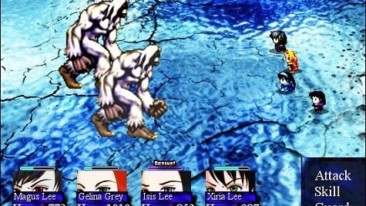 A Review of Chronicles of a Dark Lord – Episode One: Tides of Fate (Enhanced Edition) 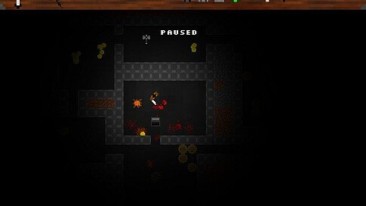