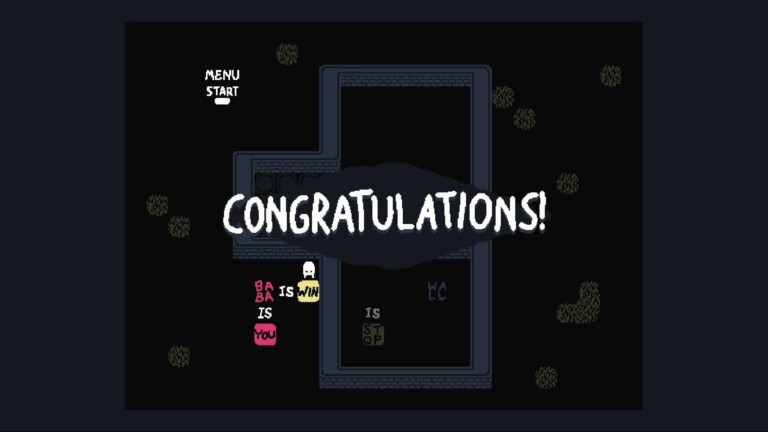 Game Name: Baba Is You

Baba Is You by Arvi Teikari

We might think of our behaviors in games as representative of our personalities, whether we try to explore every inch of the map or maximize rewards or hang out and dance with friends online. I think I have a particular way that I play games, too.

With so many games releasing, it can be difficult to keep up, and so our play patterns remain the same; if the game doesn’t fit our pattern, we might not go back to it.

Baba Is You from Arvi Teikari changed that for me. I was not dancing to my own rhythm but slowing everything down so I could listen to its beat. It softly pulses away as you look at the screen and try new things. It’s a world with its own internal logic, but that means something truly different in comparison to other games. 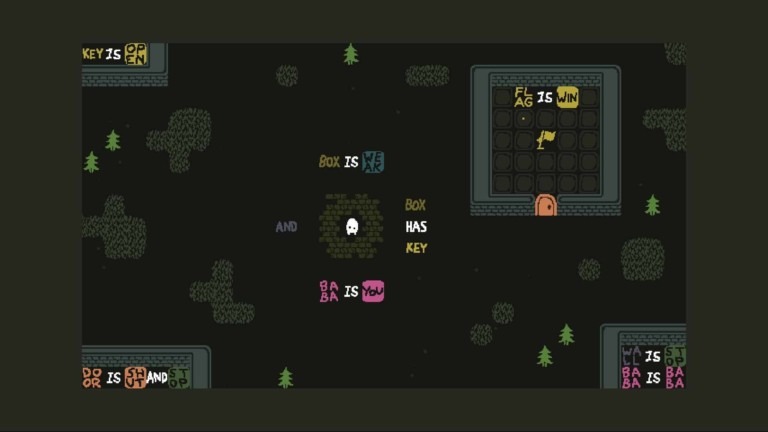 It teaches you its own language, as long as you’re patient enough to learn. It challenges you to come up with different ways to approach a puzzle. And it very gently questions the nature of identity and objectives in games.

Baba Is You came from the Nordic Game Jam in 2017. The theme was “Not There,” with the designer Arvi Teikari thinking about how “not” works in logic. It was that binary on-and-off that led to one of the most challenging puzzle games of 2019.

The player is Baba…sometimes. This rabbit/dog/cat creature travels around an island reminiscent of early Mario games and solves language puzzles from a top-down perspective.

The player is presented with several three-word statements like “Wall Is Stop” and “Flag Is Win.” These words are presented as blocks in a row that can also be pushed out of sequence. So pushing the “Stop” out of the statement “Wall Is Stop” means the “Wall” is no longer an object which hinders movement. The player can freely walk through the walls. 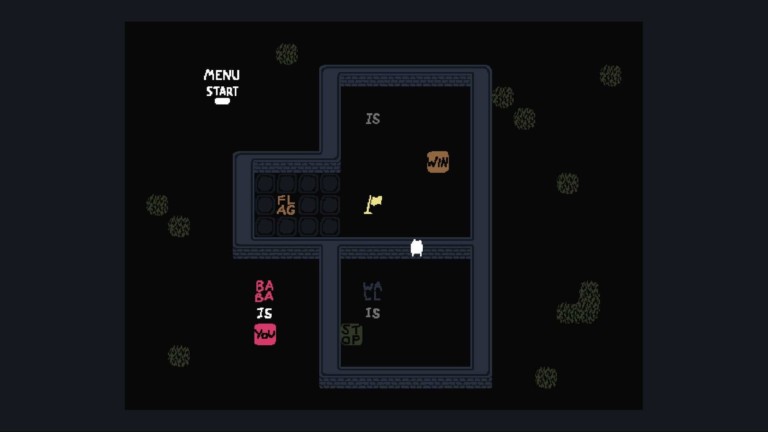 As you might imagine, this structure has a wide variety of applications: “Rock Is Push,” “Key Is Open,” “Water Is Float.” Each statement can be changed around so that the rock is floating and the water can be pushed.

This sort of mind-bending dynamism is perfect for a puzzle game. Soon the player is matching all sorts of statements to turn the world upside down. “Wall Is You” means you no longer control Baba but all the walls in the level, almost as if you control the level itself.

The Risk of Difficulty

It’s easy to be effusive about Baba Is You. The charming artwork and chill soundtrack are welcoming to the new player. But it is an incredibly challenging game. The thing that Baba Is You foregrounds the most is that taking a break is really helpful.

That’s a dangerous notion for games these days. With so many titles vying for our attention, being stuck in the game – letting the player be faced with the idea to just take a break from it – can mean some don’t come back.

But the charm and allure of Baba Is You draws the player in. It presents its puzzles so enticingly. The top-down perspective and one-screen nature of it all means that particular puzzles might stick in your mind for days until you just have to go back and have another crack at it. 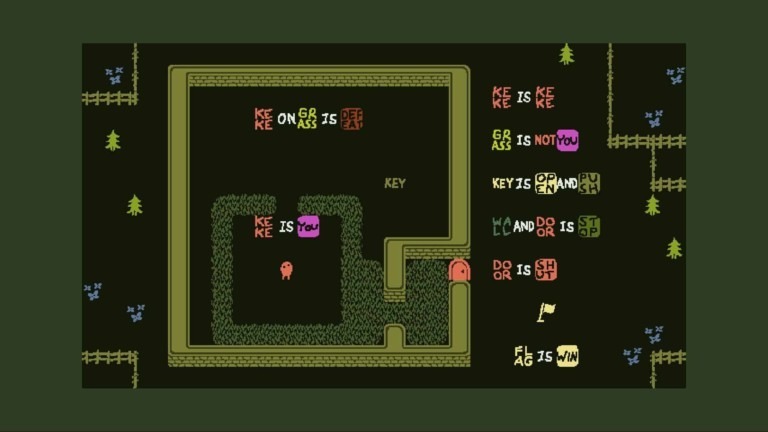 I have been playing Baba Is You for months now since it was released, only achieving incremental advances through its web of levels. Some nights I am still haunted by levels that I can’t see through. I don’t think it’s a problem of difficulty curve but of engaging with the game on its own terms.

Stepping away from a problem for even five minutes can be all it takes to help you see the error of your ways. It’s true in life and especially so in all sorts of games. Resting brings you back fresher, and it’s a lesson I’m sure some of us could do with learning. Baba Is You has really helped me see this in short bursts of tackling its levels.

It asks us to unlearn what we think we know about video games. It takes some wonderful tropes in games and asks us to break them. Does the flag always have to be the win condition? Certainly not when it can be switched with this rock!

Even in approaching a puzzle the game encourages multiple ways of thinking. You can reverse-engineer the problem and think from the flag backward. You can experiment endlessly with the possibilities. Or perhaps you can sit and stare at the screen waiting for divine inspiration – or even try and brute force the game by trying every possible variation. 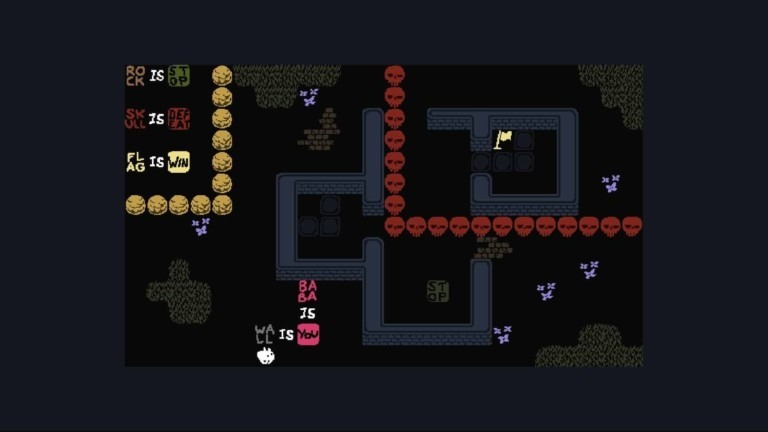 That last one is inadvisable, though. The game is trying to teach you its language, the internal logic that governs its world. It wants you to understand it. And this requires that you think differently. In this way, Baba Is You doesn’t resemble other puzzlers like The Talos Principle or Braid. It’s more like The Witness or even more so like
Antichamber.

Who Is Baba and Who Is Flag?

It’s such an innocent game on the surface, but there’s so much more beyond that. It’s an incredibly difficult puzzle game that will push the player to their limits but will always invite them back for more.

But it’s interesting for another reason. In the game, there is always a three-word statement declaring who you are. For the most part, that’s Baba. For fun, you can change “You” into the wall or a rock. In this way, you can also change what the victory condition is: from a flag to a rock or a rose. 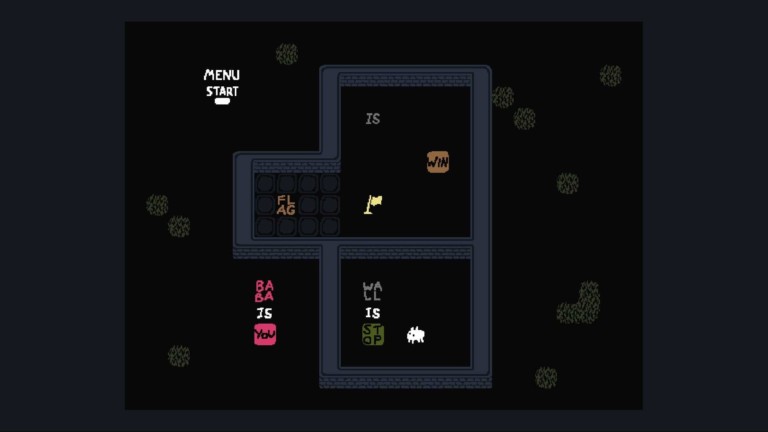 But the most interesting and introspective moments I’ve had with the game and almost with any game I’ve played this year have been when the answer to a puzzle is to manipulate the level in a way in which Baba is both “You” and the victory condition. Upon achieving this you win automatically.

There’s something so pure about the idea that the objective in a game is not hundreds of miles away or to eliminate every enemy, but to find the objective in oneself. To understand that “You” are enough.

Baba Is You is available via the Nintendo Game Store and Steam.

Watch the official Baba Is You trailer below: 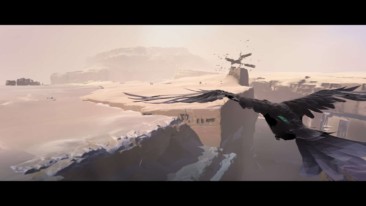 Vane Review – This Moody Puzzler Is for the Birds 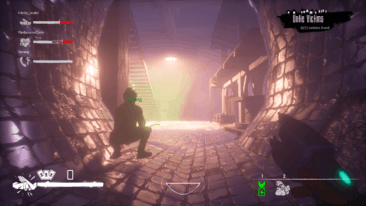 The Blackout Club Review – Team Up Against Small Town Scares