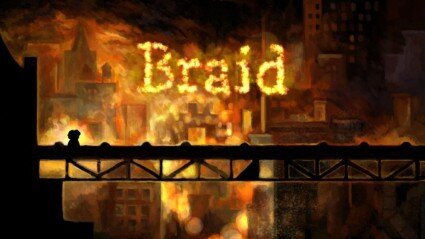 In a world of multi-million dollar budgets in video games, independent video games are gaining ground, and from this growing new wave of creative and inspiring games comes Braid by Jonathan Blow. While at first glance Braid appears as a classic puzzle/platformer, it proves to be much more.

The gameplay herein is based on time manipulation, which is becoming fairly common within this generation of gaming; but Braid does it right, turning a mechanic into the entire crux of the game rather than a simple gimmick. Each stage has its own rules on how time can be controlled and what is affected by time; perhaps the most interesting of which is one that features a shadow of what you have done before you “rewinded” time.  It’s an odd feeling, trapping yourself and seeing your shadow image stare back at you, unable to get out.

The art and music is simply astounding; water-colored impressionistic art depicts vibrant characters and backgrounds hazing in and out as though the paper on which is painted is still wet. The music enhances this dreamlike effect, shifting from the tones of a music box to something you’d expect from Pirates of the Caribbean. Perhaps the most impressive things of Braid is not what is seen, but what is felt.

Braid does one thing that multi-million dollar productions fail to even get a drop of: emotion.  If you could undo your past mistakes and try to make everything right, would it really matter? Even if you try to make everything right, does that erase the fact that you did it at all? Braid asks these questions without texts or direct implications towards it.  Without any question, that is the triumph of this stnadout title.

Get Braid at Steam!