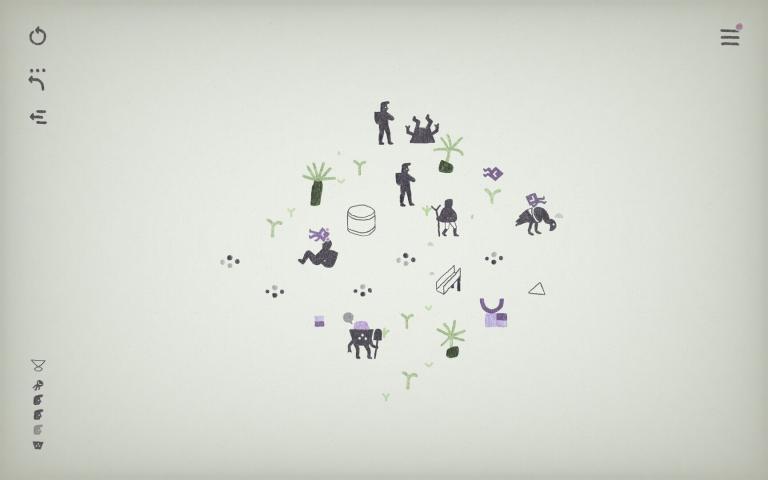 Wilderplace is at heart a shamanic journey in game form, a modern interpretation of the spiritual tension between humanity and the land, between civilization and wilderness, between nature as “natural resource” and nature for its own sake.

It’s about the difficulty inherent in maintaining that balance and the call to sacrifice that nature asks of us. As player, we are the shaman, called to the Divine Garden – a primordial forest representing nature itself – to attempt to restore the balance by returning its unsettled and restless spirits to their most natural forms.

Lead designer Saman Bemel-Benrud’s art captures that sense of tension well, his hand-drawn pencil sprites at once evocative of modern zine art and paleolithic cave drawings. It feels both ancient and contemporary.

I particularly enjoy the spirit guide who explains the rules: a faintly devilish but playful goat-man-spirit embodying countless legends of witches meeting a dark man deep in the woods. He contributes to the game’s overall sense of playfulness and humor enhanced with a faint undercurrent of menace.

Possession is Nine-Tenths of the Law

The core mechanics of Wilderplace work on a similar level: the spirits of the plants and trees are restless, escaped from their rooted physicality, and eager to possess new creatures…including you. As shaman, spirit possession is the source of your power, but it’s a double-edged sword: wait too long to move a spirit to a more permanent dwelling place, and it will take over, turning you into a tree.

Again, I’m reminded of old folklore, like the Scottish ballad “Tam-Lin,” whose titular hero was turned into a tree while lost in fairy-haunted woods. But there’s a playfulness, too: the spirits joke with you about how happy they’d be to kill you. It’s not pure folk horror: more like cottagecore, except the cottage belongs to a cannibal witch from one of the stories the Grimm brothers collected.

For a game with such an arresting aesthetic and overarching themes of environmentalism, ecology, and animistic mysticism, actually playing Wilderplace is incredibly simple. You move your character around a board, rescue animals from spirits, and rehome the spirits by moving them to plants. 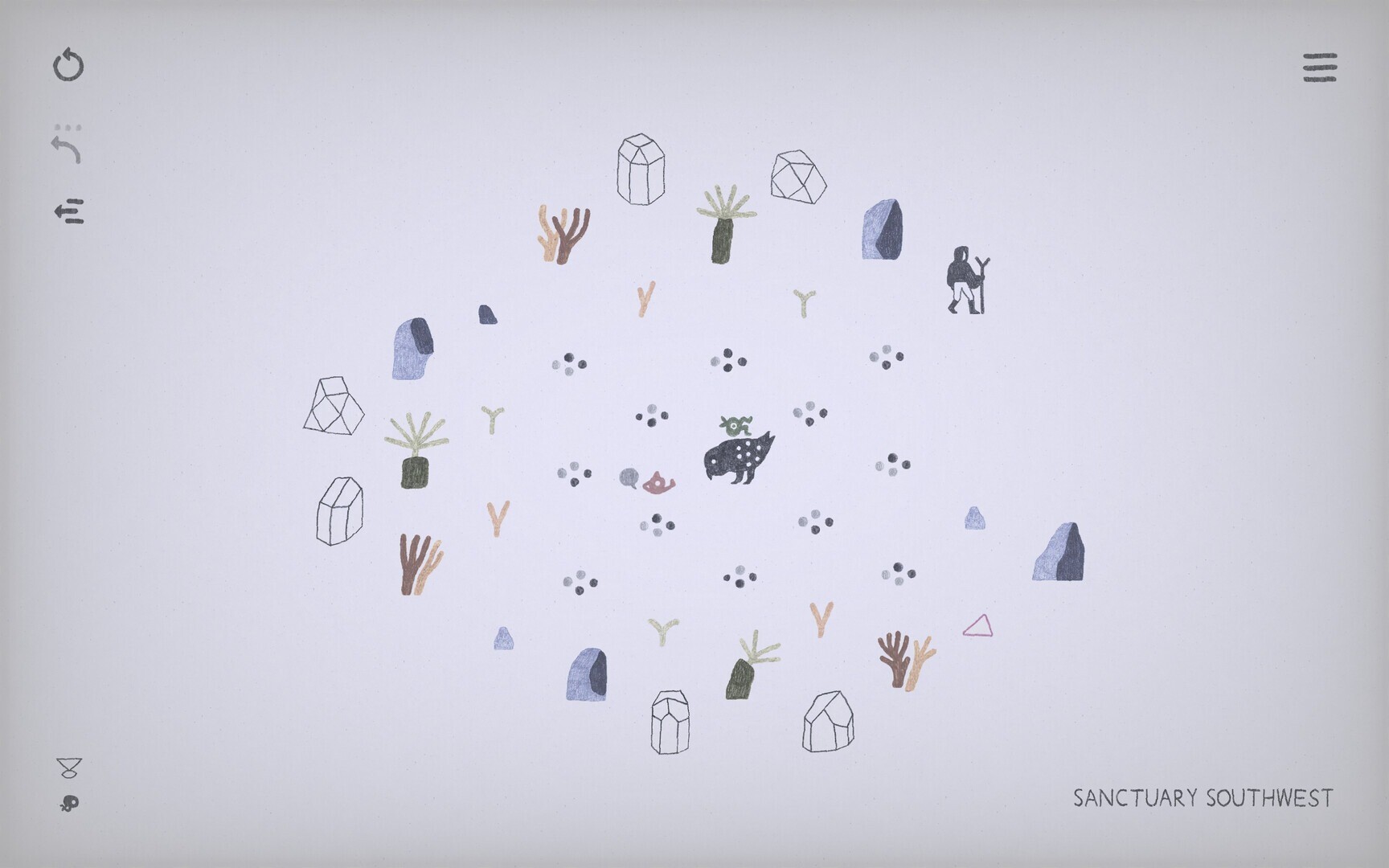 Each permanently-housed spirit becomes a tree, rendering its square on the grid impassible, and while housing a spirit, you can only make three moves before becoming a tree yourself (and thereby losing the level).

Puzzles gain complexity as you advance; unlike wild animals, for example, lumberjacks will move around the map on their own, chopping down trees and altering the structure of the map. In essence, though, Wilderplace plays like any number of Sokoban derivatives and alternatives, requiring plenty of forethought before moving to avoid trapping oneself.

It also feels very tactile for a seemingly cerebral puzzle game: both movement and actions like placing a spirit into a plant use the same click-and-drag control scheme (to move without placing a spirit, you just hold the click a bit longer before the drag).

Wilderplace is currently available for PC only, but I think it would play wonderfully on a tablet. Not only does the simple, tactile control scheme seem ideal for a touchscreen, but the puzzle designs seem great for mobile play, as well: get stuck, put your mobile device down for a while, then come back to it. 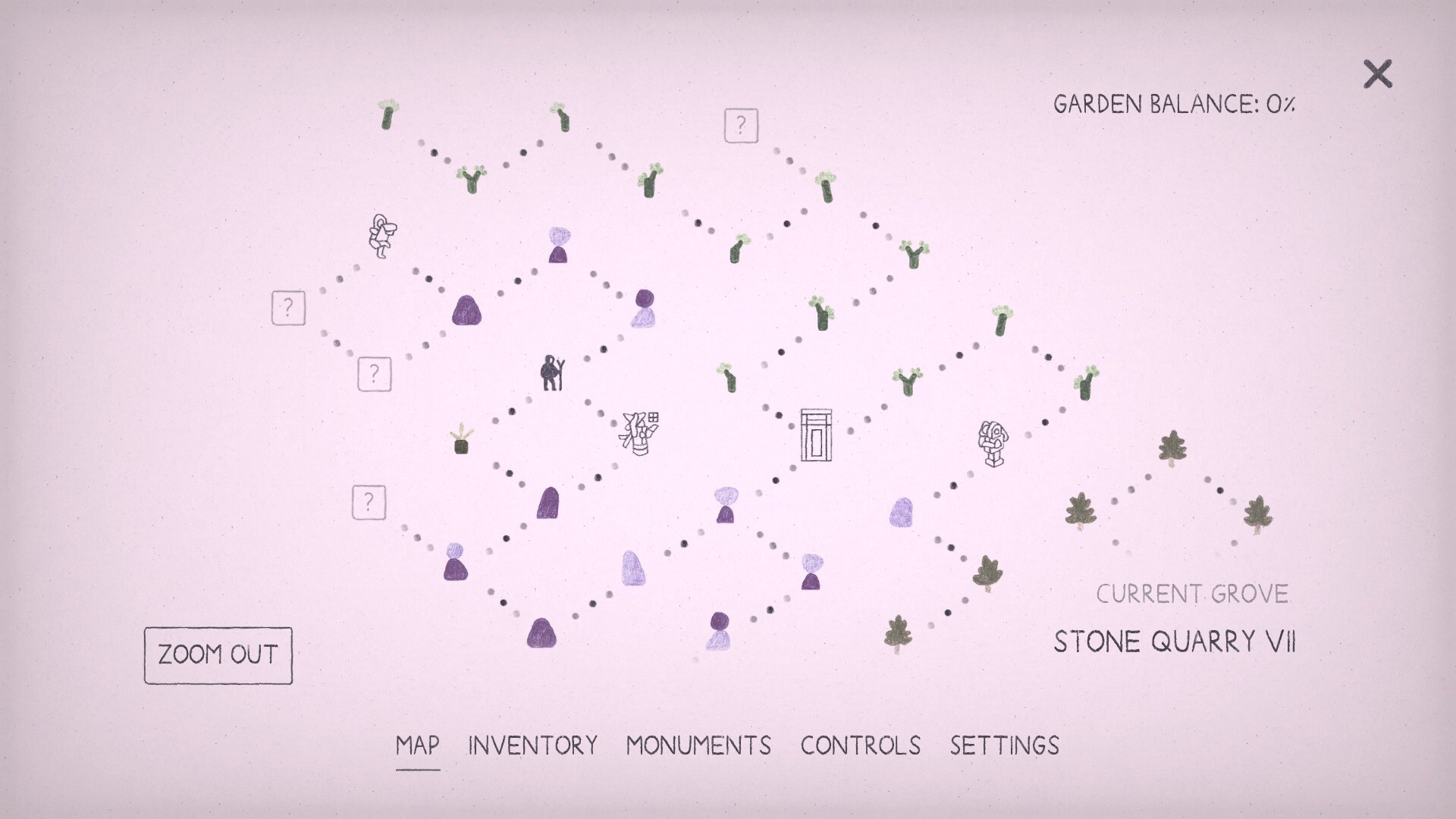 You can do the same with a PC, I suppose, but there’s something about the ephemeral nature of mobile devices that makes something feel like “taking a little break” from a tablet game but “closing the level in resigned defeat” when you’re on the computer.

The Journey Is the Destination

I guess the big question, then, is how well the two disparate factors – mystical modern primitive meditations on ecology by way of positional puzzles – actually work together to form a cohesive whole.

The answer is, “Pretty good, I guess?” And I’m not 100 percent sure why I’m noncommittal about that. It might be puzzle game burn-out from the treasure trove of intellectually intense offerings in Last Call BBS, and it might also be that Zachtronics games have set such an amazingly high bar between framing device and logic puzzle that anything else falls a little short.

In any case, the puzzles in Wilderplace are engaging, and the animist aesthetic is even more engaging, and this is a game well worth playing if you’re interested in either, even if they’re not tied together quite as closely as I had initially hoped.

Wilderplace is available via Steam.

Watch the trailer for Wilderplace below: The Excavation of Hob’s Barrow Review – A Folk Horror Adventure