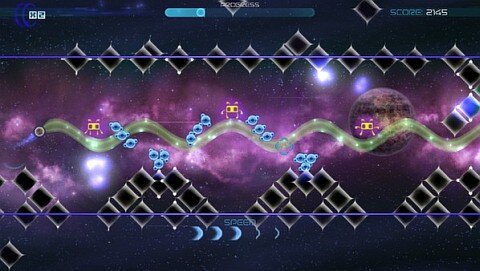 Simple to play but difficult to master, Waveform combines the pure fun of retro arcade titles with all the modern bells and whistles of modern gaming. Colorful graphics and a retro soundtrack accompany 100 levels of increasingly fascinating and wondrous challenges featuring mysterious and fun objects like Wormholes, Particle Accelerators, and the enigmatic Space Squids of Venus!

Eden Industries’ Waveform occupies a strange niche between platformer and rhythm game, something like Sonic the Hedgehog meets Dance Dance Revolution. It’s conceptually quite simple; so simple, it’s a little surprising that there haven’t been more games like it. While it can be frustrating at times, its “one more turn” addictiveness makes it a hard game to dislike.

Waveform’s frankly unnecessary plot is that a singularity is absorbing all of the light in the universe. As the last remaining light particle, you travel through the solar system collecting fragments of light to reignite the Sun..or something like that. However, as any good physics nerd will quickly point out, light is also a wave, and therein lies the gameplay dynamic.

You control the path of your particle of light by adjusting the amplitude and frequency of its wavelength. The goal is to collect as many light fragments and power-ups as possible, while avoiding fragments of darkness. Levels are grouped by planet (and dwarf planet, in Pluto’s case) and, upon completion, open up access to further levels, bonus levels, or the next planet. Although you can progress through the solar system with the video game equivalent of a “gentleman’s C”, there is a strong compulsion to get a perfect score on each level.

Waveform will drive completionists up the wall with the sheer amount of criteria that go into scoring a level, which is either a good or bad thing based on your perspective. Waveform doesn’t suffer from control issues, per se, but if you’ve ever tried to give yourself a haircut or tie your shoes while looking in a mirror you’ll have a good idea of how the game plays. That’s not necessarily a bad thing, since the controls are essentially the challenge of the game, but it can lead to occasional frustration when the tempo picks up. It also seemed at times like it wasn’t possible to manipulate the wave into the right place.

The latter may have been a manifestation of the near-constant feeling I had the feeling that there was some important gameplay mechanic that I was missing, as if I was thrust into the middle of the game without knowing quite what I was doing. I haven’t felt that about a game in many years, and I found it surprisingly refreshing. It adds something more than challenge–it adds a sense of mystery: a feeling that, if I would only play one more level, I’d uncover something new. For a game that’s basically an oscilloscope, that’s a profound achievement. [Hey, the first ever video game was a tennis game made of a tweaked out mod on an actual vectorscope, people lined up for hours! – ED.] I went into Waveform with pretty low expectations, thinking that it was just another indie action game—a nice project from a small developer, but nothing to write home about. I was pleasantly surprised by how easy it was to get into. It has that quality of good, simple games that lets players effortlessly immerse themselves. It’s built around a unique gameplay mechanism that challenges players to draw on every bit of coordination, without the frantic speed of the bullet-hell shooter or the unforgiving precision of the hardcore platformer.

Waveform is a fantastic game with tons of replayability, an easy recommendation, and hopefully a promise of more to come from Eden Industries. 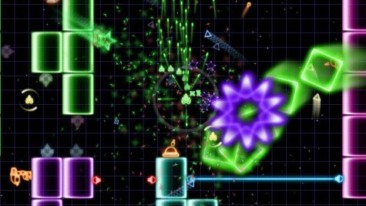 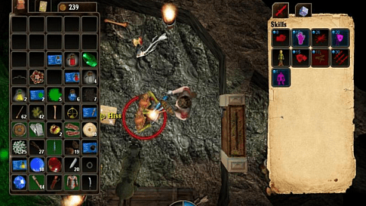 Review: Driftmoon RPG – wherein we make an exception to rate an alpha build