The LEDs lining the outside of the CN Tower pulsed and sputtered, changing colors rapidly as if capturing and communicating every creative impulse coursing through the city. Giant inflatable clown heads peeked out of alleyways, and live bands sang out while a bonfire raged on the middle of the street. Now entering its fifth year, Nuit Blanche once again transformed the city of Toronto into a living, breathing art exhibit that burned on from dusk to dawn.

As gigantic moving projections became the facades of buildings, and massive towers of speakers carried the soundtrack for the dancing images that graced hundreds of over-sized LED displays, there is no question that technology and art can (and often do) go hand-in-hand.   Toronto’s own Hand Eye Society was at the TIFF Bell Lightbox, presenting 6 indie games, all mounted in retro arcade cabinets.  I took some time to sample the machines on display and ready to play (no quarters required)!

The Hand Eye Society prides itself on supporting independent game developers in the Toronto area, and provides various opportunities to bring them together. Events like this also bring in an audience. The list of quality games emerging from this tight-knit community is growing steadily.

What struck me the most about the games on display at Nuit Blanche is how masterfully the creators have made use of what resources were available to them. In this time of incessant technological advancement, today’s bleeding-edge will inevitably become tomorrow’s faded brown spot, and the average “best before” duration is forever shrinking. Rather than toss the gaming conventions of yesteryear aside, these games embrace and celebrate them. Sure, the booger-hunting concept of Gesundheit! is absurd, and the control scheme is simplistic, but give it an adeptly applied coat of paint, and suddenly the bizarre experience is transformed into a whimsical journey.

The 16-bit sprites in Encaphalopods ooze with as much charm as gaping squid orifices ooze…well, ooze. It’s this skillful, divergent approach to game design that breathes new life into the technology of just a few short years ago, reconstructing it as something that is often more vital than any soulless collective of polygons that may shuffle its way out of the Uncanny Valley. N and Everyday Shooter have already shown the gaming world that you don’t have to be big tech to be big time. 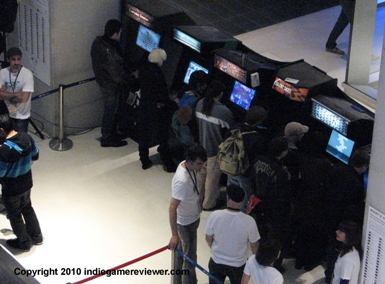 The soothing, ever-morphing edge-of-your seat shoot-em-up. Each level brings a new way to rack up points, and another stylish groove to survive. As if this game wasn’t already engrossing enough, you could also play it projected on the giant wall behind the exhibit.  Version info and more can be found on the Everyday Shooter website.

Did you know that pig snot is a monster’s favorite food? It’s news to me as well. In Gesundheit! you’ll be brought to various levels and tasked with the destruction of deadly beasts. By projecting your tasty, tasty mucous, the monster will play follow-the-booger, even if it means stepping into a deadly trap. Gesundheit! features fantastic hand-drawn visuals that create a realm found somewhere between Samarost and Where the Wild Things Are.

Crazed alien squids are invading! You and a partner will play as the Lady Scientist or her robot butler. One is equipped with a mallet, and the other, a shotgun. The mallet is used to repair damage done to the barrier boards, and the shotgun is used to pump the cephs full of red-hot buckshot. Tired of one role? Partners can switch jobs by simultaneously holding up their tool, causing a hand-off. Teamwork is a must, because getting a squid off your own head is just plain awkward.

Winner of the Gamma IV competition, this understated title has you gently gliding in arcs going left or right through four shadowy stages, dodging enemy craft. The catch? The entire game is controlled with a single button. No joystick? No problem.

N Arcade brings back the explosive ninja rag-doll physics game, and introduces a welcome competitive/co-op mode. Dodge explosives, spikes and enemy drones as you run and triangle-jump your way to the exit of each stage.  Check out the classic game, as well as info on other versions.

Making a triumphant return to the limelight, we featured this six-in-one cabinet in our coverage of the 2009 Canzine Artcade.

Many thanks to Jim Munroe and Jori Baldwin for their time! We look forward to seeing the Hand Eye Society again at Gamercamp in November.

Care to learn more about the Hand Eye Society?  Visit their homepage.