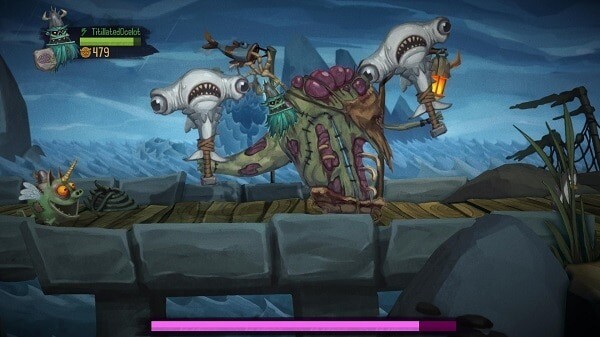 Zombie Vikings – What We Think

Stick It To The Man! creators Zoink! have delivered Zombie Vikings, a gorgeous beat-em-up side-scrolling romp through a fictitious Norse countryside. The story mode allows for single play and co-op, and an online brawl option is available, as well. 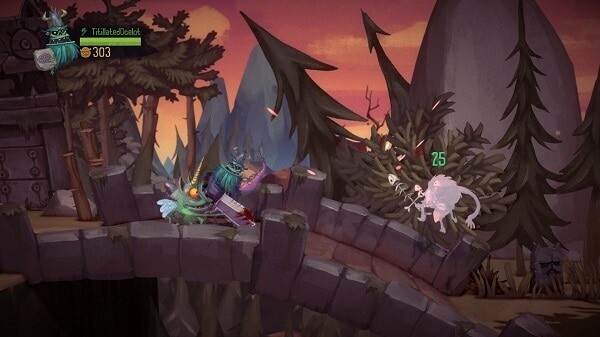 When Odin loses his eye to the mischievous Loki, he summons the undead bodies of some of Valhalla’s greatest champions. Four heroes emerge (five if you count Raz-ombie from Psychonauts), each one possessing their own combat advantages and weaknesses. The team agrees to take up arms against the famed trickster.

As brawlers go, Zombie Vikings makes a solid entry in the genre. Each character has a unique charge up attack, and all can strike, jump, block and dash. In keeping with tradition, the action involves laying waste to multiple foes using these attacks, all the while scrolling right until encountering the next conflict.

Dying in a single player campaign will result in a jump back to the last checkpoint. Should you be so fortunate to have friends to tag along, you can revive one another should one of you get bested in combat. You’ve got a better chance in battle with friends, but there’s only so much treasure to be collected. Finding the balance between keeping comrades alive(ish) and hording loot makes for good competitive fun.

Each stage has side roads that can be taken. Following these will lead to additional quest opportunities, and the completion of these unlocks runes and weapons, some of which pack some impressive enhancements. If side quests aren’t your cup of tea, these items can also be purchased from stores found in each stage using in-game currency.

Zombie Vikings positively oozes with visual style. The heroes, villains and random passersby are all wonderfully grotesque, and appear like animated cardboard cutouts. The animation style during cutscenes is offbeat but highly endearing. Backgrounds and level design are also gorgeously crafted, creating a freakishly beautiful world in which to wage war.

Unfortunately, there are some graphical tearing issues. Many of these have been addressed via a patch released post launch, but there are still enough hiccups to be noticeable.

While the art design shines brilliantly, the humor in the game is a stale pie, the filling of which is concocted of oozing, low hanging fruit (and don’t get me started on the crust). Penned by Zach Weinersmith of Saturday Morning Breakfast Cereal renown, the jokes try to be as gross as possible, often reaching the level of 8-year-old-boys-at-a-sleepover silliness. Here’s a typical exchange heard from the game:

That’s roughly what you get. Farts, poop, lewd references to sex and other over the top throwaways abound. There are more references to the anus than you’d likely hear in the career of a proctologist. Punchlines are ham-fisted grabs from the gross barrel, crammed into the mouth of a vomit cannon. Though I must admit to the odd chuckle, I largely found the overtly crude dialogue off-putting enough to skew my enjoyment of the story.

Some of the other jokes are just plain weird. There are far too many references to current technology, such as Instagram and the Internet (it won’t be invented for 1000 years!!). The juxtaposition is odd, and messes with the overall Norse tone. Misfired punchlines hang in dead air for just long enough to induce groans and wincing. There doesn’t seem to be a theme for the humor other than “weird for the sake of weird,” and it just didn’t come together for me.

That said, the voice cast does an excellent job, delivering a decent range through their characters, even allowing for some brief emotional moments to creep in. Each member of the quartet gets the backstory treatment, and I wish there were more of these sorts of asides, but I imagine that the overall wacky tone might not have allowed for much wiggle room.

The musical score had me envisioning Quentin Tarantino on a surfboard. While it certainly isn’t what I imagine when thinking of Norse mythology, neither is the whole zombie thing in general. The tunes are racy yet suave, and fit the frequent combat sequences incredibly well.

While the jokes won’t tickle every funny bone, Zombie Viking’s visual style and play mechanics are laudable. Gather some friends together, and the act of slaughtering foes in the name of Odin becomes a fun-filled community effort. With 30 levels to clear and master, and over 40 swords to unlock, fans of sidescrolling brawlers will have plenty to keep their ever-so-tasty brains occupied.

Zombie Vikings is available through Steam, and on the PlayStation Network

Watch the launch trailer for Zombie Vikings below: 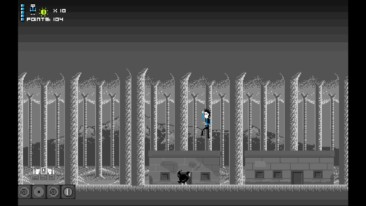 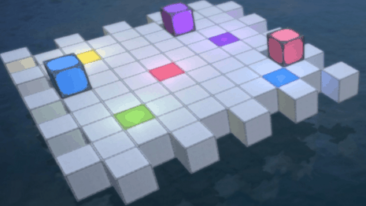 Bloxitivity Review: Think Outside The Blox