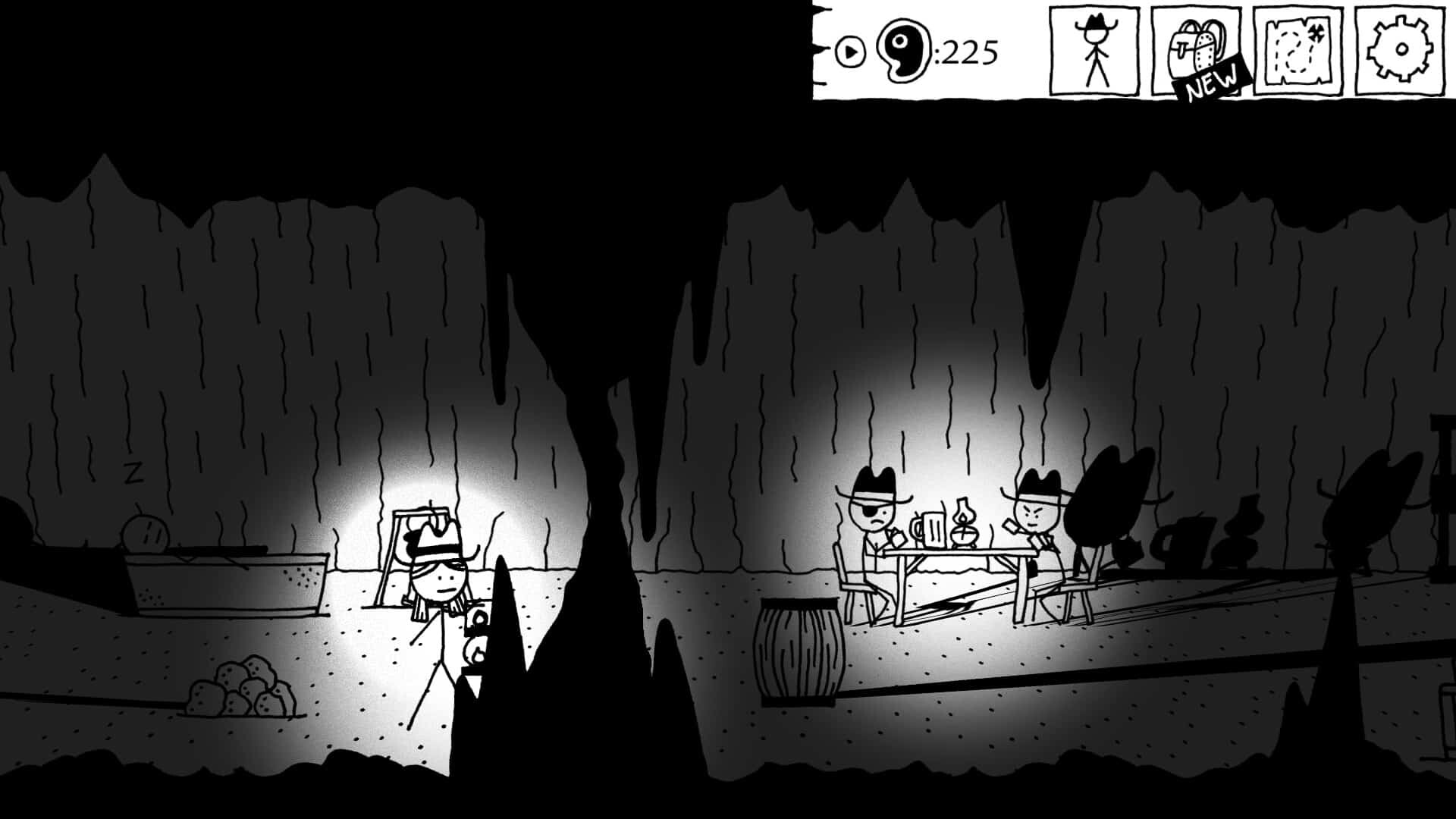 West of Loathing by Asymmetric

Waaaay waayy back while were still reeling from the wake of Pre-Millenium Tension, 9/11, and Friendster and this thing called Facebook wouldn’t yet be invented for another year, I met a girl in then-one-year-old MMO – Sims Online, the rather incredible experiment to bring the Sims into online social mode. We spent a lot of time throwing objects around our virtual homes and getting our Sims to make out.

A Tale of Two MMORPGs

Though I didn’t know it at the time, this avatar, who went by the name of Beancan, would be responsible for introducing me to two future hardcore addictions: the rich and densely populated World of Warcraft and the diminutive, fringe, browser-based, PHP-driven MMO with stick figures, Kingdom of Loathing.

WoW would suck me into a four-year vortex of real-life chain-smoking indoors with the windows shut, weight gain, pasty complexion and practically losing my apartment and my partner and lots of other sexy things, thanks to a world filled with pretty colorful objects and drawn-out quests with a brilliant and cruelly designed curve that required the assistance of others, which in turn required socializing, asking for help and other virtuous lessons.

By contrast, Kingdom of Loathing was a punk rock, antithetical, wry and absurdly minimalist counterpoint to these behemoths and their monthly subscriptions and 40-person raids.

I don’t want to talk about WoW anymore. Like…ever.

To this day I still often daydream about KoL, though, which – incredibly – is still online and active as ever after 15 years. I think the first character I rolled was a Pastamancer, and I derped my way around the map trying to figure out what the hell was going on. And then I did and laughed – a lot. The humor was sharp and unrelenting, the kind of creative comic fluidity that you might find in any Douglas Adams book about the Universe and the number 42.

So, yeah, fast forward through MySpace, Facebook, Twitter, the Arab Spring, Occupy Wall Street, the election of Barack Obama, the deaths of Lemmy, David Bowie and Prince and the realization of Mike Judge’s film Idiocracy, and BOOM! I get an e-mail about a Western-themed version of KoL. Say wha?

So what the hell is West of Loathing? It is a stand-alone, non-browser-based, solo RPG wherein you go around clicking on things that say funny stuff when you do, and doing fetch quests, JRPG-style combat against bad guys, do some tradin’, levellin’ and lots of talkin’ as you unravel the epic quest to take down even bigger bad guys and gals along with some NPCs you may convince to join you along the way.

At first I just wasn’t sure. I mean…wasn’t half the fun in KoL the fact that it was a browser-based, stick figure MMO inside a browser page? Take all that away and what is left? Real-time shadows, apparently. Synth-based twangy guitars. Not having to be online. Brilliant writing. Puns. Boundless comedic creativity.

Some of the secondary activities one might undertake whilst in the world of West of Loathing include cleaning up piles of horseshit, searching inside of gunk-filled spitoons and hustling clueless poker players.

Logging back into my ancient KoL account, I saw that there are unlockables in both Kol AND WoL in the KoL store – horse armor in this case. Cool! I can’t believe this whole thing is still ticking in a world where so many beautiful things and idols and weather patterns have been lost. 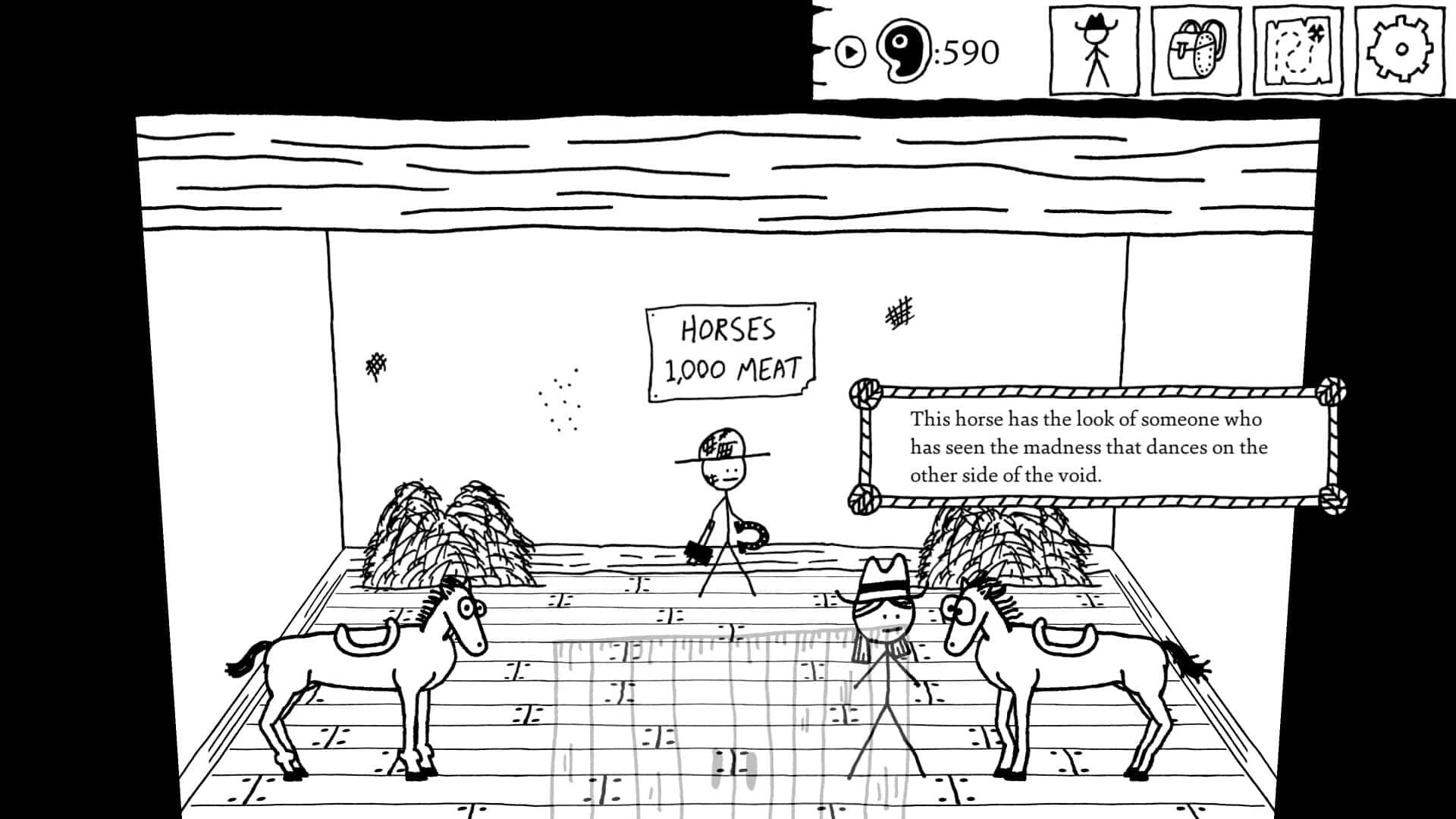 Though at first I was skeptical of the progression in WoL, I soon realized it wasn’t quite as linear as I was expecting it to be, and that certain daunting challenges early on required a bit of back-and-forthing between environments and quests to actually do what one does when noobing around: level, skill up and get a better handle on the game and its world.

Rules Are Meant to Be Broken, Cowboy

Another layer was figuring out how the good people at Asymmetric chose to adhere to strict convention in RPGs/JRPGs – or if they would just bend rules in favor of humor? I hoped this wouldn’t be the case, since I know this to be a game with the promise of many hours of content, and for all the hard work I may put into acquiring items and pushing my skills up, I wanted that to count for something immutable.

Early on I worried that my Deputy’s Pistol had infinite bullets and my band-aids never expired (though they could only be used once per battle), as did my beefy buffs. Did this mean that I was in a full “Toon” world where all resources were inexhaustible and the only consequences of failure were a brief time out? Somewhat, yes. But OK, they were at least consistent, and that’s all I really asked.

I started noticing too, that the game was more elastic than an RPG Maker adventure or a side-scroller with story tacked on for pseudo-thematic embellishment. The Fast Travel map might have been the first clue. But once I discovered a free Wander mode, where dozens of secret caves, ranches, buildings and encounters began to populate my otherwise meager map-pickins, I recognized that I was playing something more akin to Skyrim. Well, if it was animated by a six-year-old made out of memes. Indeed, the devs made the comparison themselves in their original press release.

This is a text-heavy game. Not as bad as some digital anime games, but not something you can play from across the room unless you have a really large screen. That said, the writing is what makes this experience so good. It is a gift to get a new title from Zach “Jick” Johnson, Kevin “HotStuff” Simmons and the team at Asymmetrical Publications.

Once I understood the conventions of the game, and that I could loop back and return to quests when I was strong enough to manage them, and felt reassured that I was playing a real game and not just a simulacra gimmick, I merrily – giddily even – went on my way, on my spectral (and very chilly) horse with my band of stray semi-drunken vagabonds to face the dark forces amassing even further West than where I began. So West that it was more than West.

Watch the official trailer for West of Loathing below: 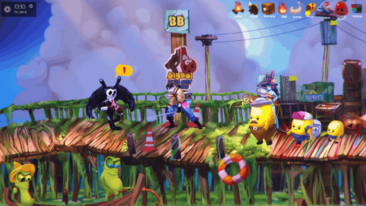 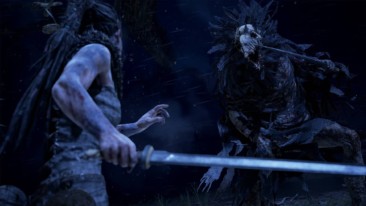