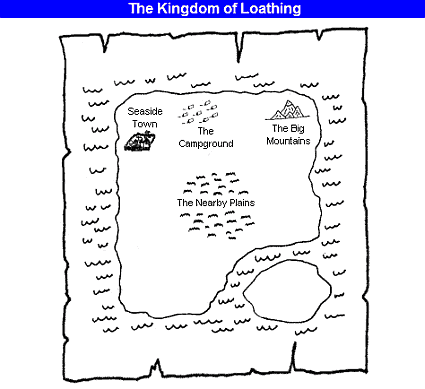 For years people have been saying that it is impossible to make money on a free product, especially if you do not run ads. The online game Kingdom of Loathing, now in its sixth year, proves that this can indeed be an effective business model, and is fun and addictive besides. At first glance, the game doesn’t seem like much: it is a text-based role-playing that is free to play and runs in your browser.

From its tagline, “An Adventurer is you,” which spoofs the classing game Pro Wrestling, to the class selection, where the new player must choose between, among others, the mystical Pastamancers or the moxious Disco Bandits an air of sarcastic absurdity pervades the entire game, especially when it gets down to the factor that often scares away new players: the graphics.

Interwoven with the text that makes up the meat of the game, are crude, hand-drawn stick-figure graphics that can be a turn-off to the casual web surfer. However those who stick around are treated to an extravaganza of fun and engaging gameplay, which seems to go on and on.  This reviewer has been playing for three years, and still has not exhausted the game’s potential.

Add to this the monthly content additions which can be purchased for the sum of $10, and the regularly added new zones, and you have a true keeper of a game.  Kingdom of Loathing is an excellent game that transcends its first impression of apparent simplicity, becoming more and more impressive each time you play it.

Try Kingdom of Loathing for free now at www.kingdomofloathing.com