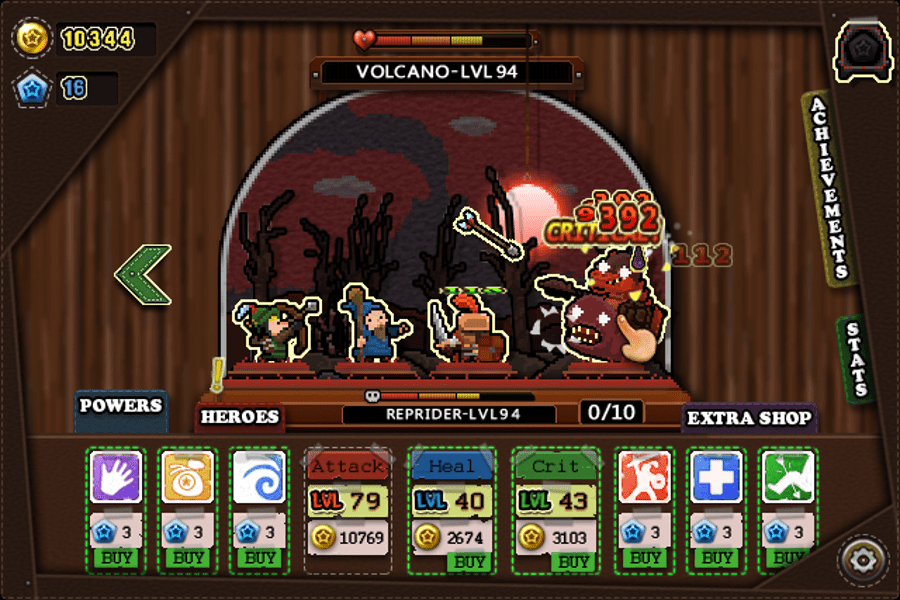 Tap Heroes: What We Think

The recent trend of porting mobile phone games to Steam has been met with mixed reactions. Many games are released on Steam and are unaltered to the point that UI and controls involve awkward mouse gestures to mimic touchscreen finger swipes. Others transition more gracefully, taking into account that controls and micro-transactions should be altered accordingly to cater to a different crowd.

Tap Heroes by VaragtP is a mobile game that has made the jump to PC, and for the most part, its PC version is a faithful rendition of its mobile counterpart, even if it feels like a fish out of water on a new platform. 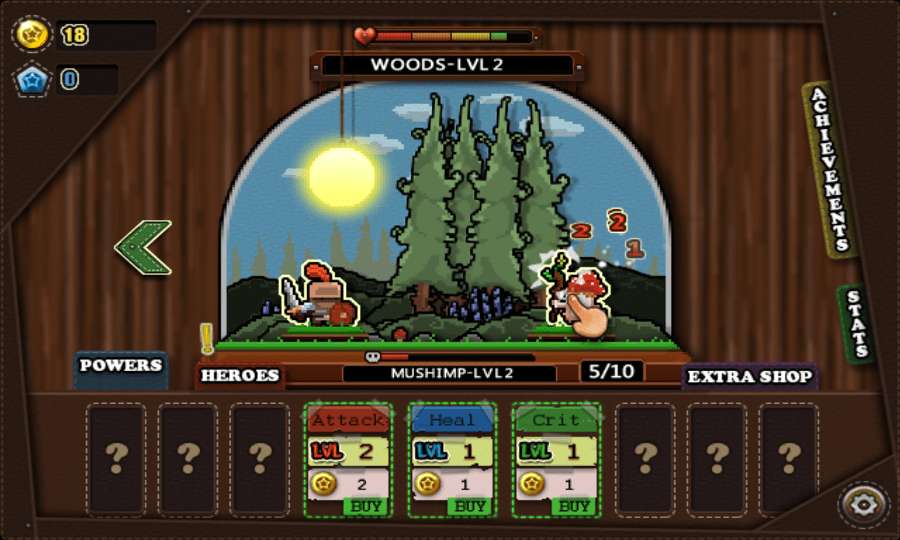 Tap Heroes involves a lot of tapping, but since it’s on the PC it now involves a lot of clicking. Clicking is the main mechanic of the game and the way you fight enemies, heal your party or upgrade abilities. Your character and allies stand still on the left side of the screen, while on the right side of the screen an endless amount of enemies will respawn, one after the other.

Your heroes will attack on their own, but in order to succeed you must also tap on enemies to attack and your heroes to heal. The act of clicking feels fine, but it does feel extremely repetitive. Each click is one attack if you click on an enemy or one cast of a healing spell if you click on your heroes. I can see how this game would work on a mobile device as just a way to waste time on the go, but when it’s on the PC, you find that the experience doesn’t translate as well.

The enemies are endless and get increasingly more difficult the more you progress. Once you’ve killed ten in a level, a boss for that level shows up. Bosses are considerably more difficult, but thankfully, you have help from two other heroes.

Other than the Warrior, early on you’ll eventually acquire a Mage and a Rogue to fight alongside you. The Mage offers automated healing from time to time, and the Rogue offers DPS effects like poisoned arrows. These heroes help, but it would have been nice to choose the other members of your party. Only having three classes in the game feels limiting. 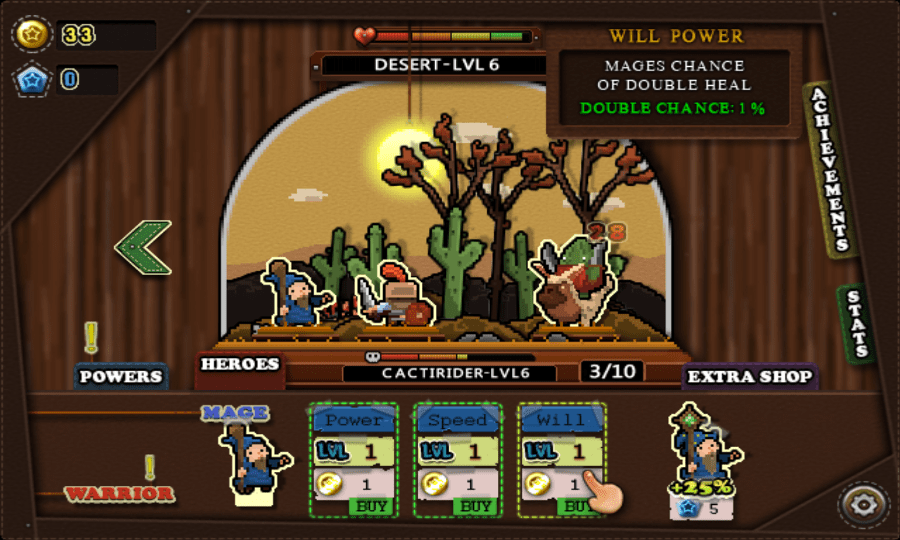 Every ability and aspect of your heroes can be upgraded using coins that drops from enemies. Upgrading is the other big aspect of the game; you can level up many things that will make your clicking experience a little bit easier. I found that leveling up the damage of my clicks as well as the health of my heroes worked fine for me. I rarely upgraded the Rogue or his abilities. I constantly felt as if upgrading my clicks was the way to go, since my heroes were substantially less powerful than my clicks.

It was nice that I was offered some freedom to upgrade what I choose, but upgrading does nothing to make the game any less repetitive or your play-through any more unique. There are base stats that you can upgrade, but no unique powers or wildly different ways to spec your heroes. It all feels very basic and purposefully simplistic.

Rather than confuse free-to-play players with more upgradeable stats, instead the game opts for a more simplistic approach. It makes the upgrading aspect of the game easy to grasp but ultimately very unfulfilling.

Besides coins, once in a while enemies will drop Gems. Gems are basically a more expensive version of the coin and are generally harder to come by. On the mobile version of the game, Gems are where the game implemented its micro-transactions. With the PC version, Gems just drop randomly. Gems can be used to upgrade other more time-based bonuses like double damage for a limited amount of time. Though they help make upgrading a bit easier, they are hard to come by, and don’t really affect the experience within the game enough to make a real difference. 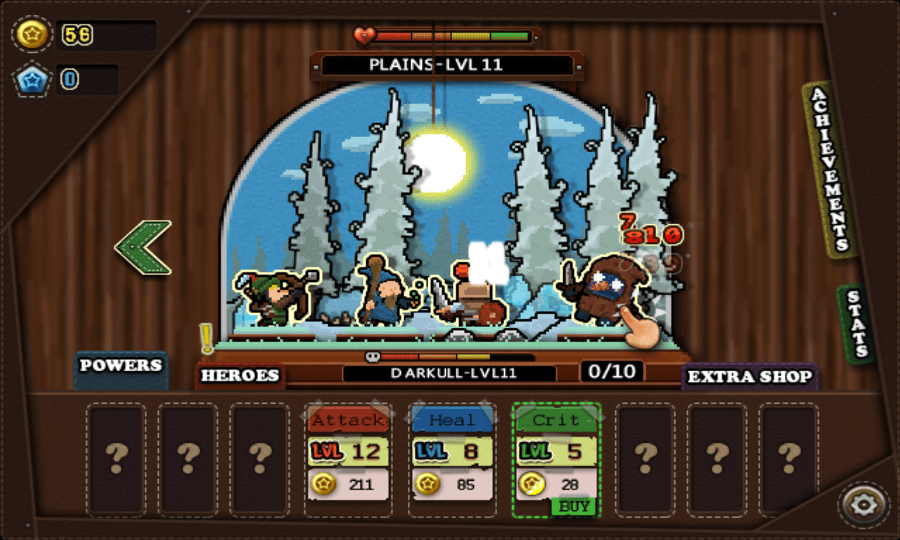 Graphically, Tap Heroes has a clean, charming aesthetic. The 2D sprites offer a good amount of detail without being too illegible. Character animations are purposefully stiff, almost as if they were paper cutouts. The art style gives the game some welcome charm. When hit, characters react with bulging eyes and shocked, expressive, tilted stances. It makes the game feel less violent and more whimsical.

There is something about the very nature of doing an exuberant amount of clicking in a PC game as opposed to doing the same amount of finger tapping on a mobile game. As a free to play mobile game, tapping on screen to attack an endless amount of enemies feels like an inexpensive time-waster. On a PC, the game is no longer free to play, which makes it a hard sell given how repetitive it is.

Honestly, I don’t know what the developers could have done to make this port better on PC. Maybe it’s a game that just wasn’t meant for a PC. I know that keeping the game free to play with micro-transactions would have helped in some way. As it stands, Tap Heroes is a repetitive experience that feels like nothing more than a small, endless, shallow game to pass the time.

Get Tap Heroes on Steam

Get Tap Heroes on the Google Play Store

Get Tap Heroes on the iTunes App Store

Watch the trailer for Tap Heroes below: 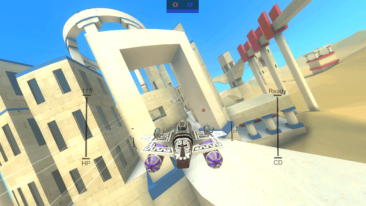 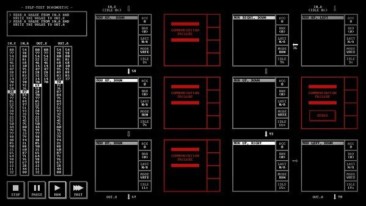