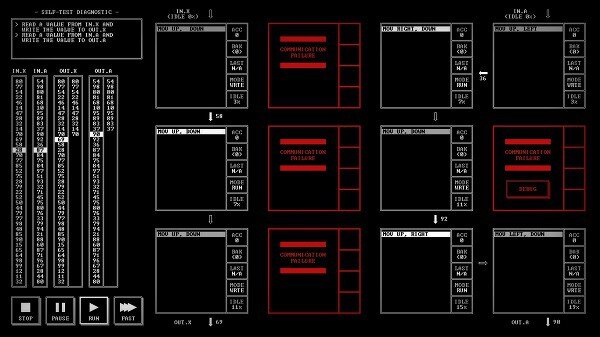 Zachtronics, the developer behind such manufacturing simulators as SpaceChem and its 3D follow-up, InfiniFactory, already has a reputation for difficult, realistic simulations of the assembly process, but TIS-100: Tesselated Intelligence System takes that a step further. This game assigns you that most abstract of manufacturing tasks: computer programming.

Previous Zachtronics games were factory simulators; TIS-100 is a computer simulator, modeled specifically on such early ’80s machines as Texas Instruments’ TI-99/4A. The attention to detail is remarkable, even extending to the instructions, a reference manual you’re expected to print in order to play the game. Not only does it look like it was copied on a vintage Xerox machine, it even features gray highlighting, handwritten notes in the margins and references to other (nonexistent) manuals.

The fidelity of the simulation extends to the gameplay itself, which requires you to learn a rudimentary version of programming—an assembly language specific to the TIS-100 “computer” itself. The computer is represented on the screen as a series of 12 square “nodes,” each of which can be programmed to carry out various operations, often involving its neighbors, using typed commands listed in the manual.

Learning to Swear in Assembly Language

The game, such as it is, requires you to write programs in its version of assembly language to solve various puzzles, often involving rudimentary arithmetic. As an example, one early puzzle, the Signal Amplifier, requires you to obtain a numerical value at the top and then double it before outputting it from the bottom node.

None of the puzzles require much math; as a game, TIS-100 is more like Sudoku than Calculus. Theoretically, it doesn’t require a programming background, either, but if you have no idea how code works, you’re going to have a pretty hard time with this. 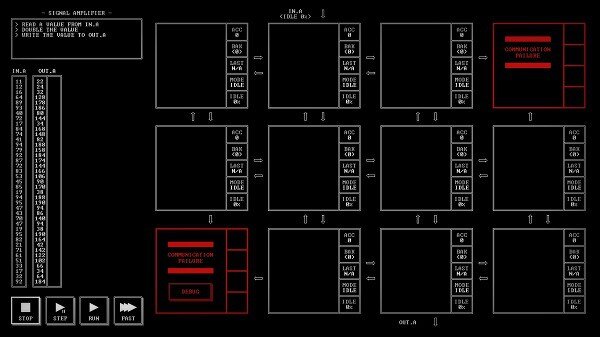 It’s not intuitive at all, and if you’re not already accustomed to thinking in terms of computer programming, the manual won’t be much help, either. It lays out the basic typed commands and provides plenty of atmosphere, but you’ll still need something of that “coding mindset” in order to actually make sense of it all.

In the event that you have an easier than expected time with the puzzles, there’s an integrated online leaderboard, so you can compete with your Steam friends over your solution’s efficiency. Use fewer nodes, fewer lines of code and fewer program cycles, and improve your score…as if learning a programming language wasn’t already demanding enough. 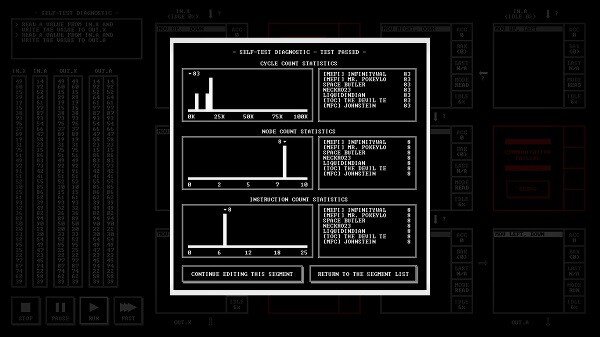 Logic puzzle games are great at provoking a feeling of frustration that suddenly turns to elation. TIS-100 distills that juxtaposition down to its very essence. You’ll never feel so brilliant as when you solve a difficult programming problem. Conversely, you’ll never feel so stupid as when your carefully thought-out program fails to generate the result you’d expected and you can’t figure out why.

That makes it tough to figure out this game’s target market. If you’re an actual programmer, TIS-100 might feel too much like getting stuck with work during your leisure time. If you’re not a programmer, this game has about 50/50 shot of making you fall in love with assembly language or run screaming in the opposite direction, back to the comforting world of match-three games and shooters.

TIS-100 is definitely a niche product. It’s pretty brilliant, though, if you’ve got the mindset and the skill to “hack” it (it’s a simulation, though, so it won’t actually turn you into a hacker).

Watch the trailer for TIS-100 below: 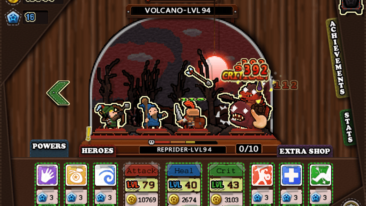 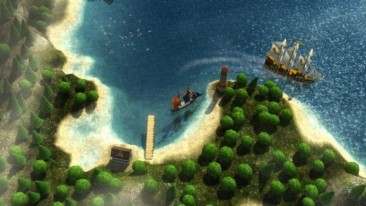