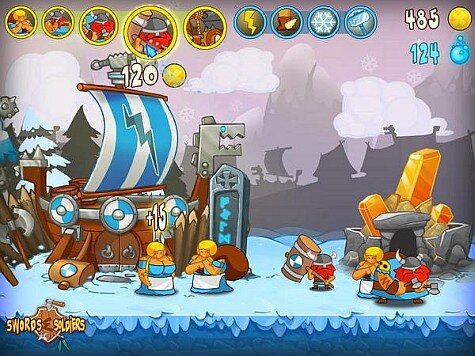 Swords & Soldiers is the funniest action-strategy game you’ll ever play! Swipe, poke and tap to command an army of Vikings in their quest to create the ultimate BBQ sauce, lead the Aztecs in defense of the Holy Pepper and build an array of explosive Chinese toys! Build your own forces and defeat your foes using berserkers, dart blowers, giant boulders, ninja monkeys (yes, we really mean it – ninja monkeys!) and many more!

SaS is a slickly designed, great looking game from Dutch independent game developers Ronimo with a Chuck Jones-level sense of humor that is finally making its way to the iOS catalog of portable devices that include the iPhone and iPad. It’s somewhat surprising that this critically acclaimed side-scrolling strategy title that has made the round trip of almost every gaming platform including Playstation Network, Steam and Wiiware is only now being ported to iOS considering what a perfect and obvious fit it is for the Apple market, retina displays and touch screen interface and tap and flick control scheme.

Swords and Soldiers begins with a quest to save the royal barbecue (and always to have ample charred meat to suck off the bone). There is a threat to the viking land and eager grunts must be trained to ward off the incumbent threat, but alas the coffers have been depleted by overspending on roasted dead animals. Thus the first step is to click the miner button and build some busty blonde miners to retrieve some rare minerals and restore the spending budget. A horizontal bar along the bottom of the screen shows the movement and general location of each unit as they move to and fro from the mines with sacks of the glittery stuff. Not much more to do at this stage except and watch the gold counter rise and cautiously observe the threat count warning that eight units must be defeated. Once the money threshold is in place, the inevitable option to build fighting units becomes available via the upgrade button to the left of the location strip.

Once you have enough to spend, you are directed to the upgrade button to the left of the map. Here you click the type of unit you would like to train and then once more to actually build that unit. Note that you must first wait for the node of the technology tree you have selected to complete before you can actually use it to build units. Once it is ready, a circular icon for that unit type will appear at the top center of the UI. A simple click and the unit will start building. Very tempting to press it again and again, but be wary of overspending, as money and mana management (doo-doo dee doo doo) will become a key factor in success later in the game as we will see below.

As they march out towards the enemy units, your newly trained soldiers will proceed to instantly march eastward and bash the crap out of the first hostiles they encounter, and the hostiles will do the same in kind in the opposite direction. In the tutorial, our first regimen is quickly defeated, so we are advised to click and build more. We are also advised that while gold is buying units, mana is for using spells and magic will aid in the field of battle. We an now use the upgrade path to cast healing spells on ailing units in the heat of battle. Similar to building units, the Heal spell is an icon at center screen – clicking on the heal button and then a specific unit heals it up.

As things become a little more hectic, scrolling can be done much more efficiently and over greater distances by using the aforementioned map at the bottom of the screen that now displays friendly and hostile unit locations, with a small “focus” box.

As we move into the second level (of the tutorial rounds) we discover we can also upgrade our mana regeneration rate. But – what’s this? We must re-invest in our healing ability which takes several seconds to build before we can deploy it – it does not port across automatically into the next combat phase. Good to know. Thus we can identify that SaS is essentially a sort of side-crolling tower-defense/resource management game. Ronimo calls is a side-scrolling RTS. Fair enough, except that there are a limited number of units, you can do much with them and really, it’s about managing your resources correctly.

Now our mortal enemy du jour starts casting lightning bolts down upon our eager and otherwise helpless first regimen. As our money meter refills we smack the unit building button and continue to pour out new canon fodder to join the ranks that march towards the enemy encampment. Side scrolling left and right along the ever broadening landscape shows a sort of history of our legacy from our humble beginnings in our modest alpine village and into the new colorful vistas now stained with blood.

Moving into the third (and still introductory) level, we are introduced to two new concepts – the retrieval of crates filled with useful assets (like more mana) and conditionals in the form of divergent paths we can take (the lower road less populated by enemies but also less crates to plunder). These forks in the road are navigated by way of road signs which can be tapped to redirect our soldiers. Note that this redirection is done by the combat units arriving at the arrow and following it, as opposed to individually selecting units and deploying them. Combat units are basically forward-moving automatons that just encounter whatever is in front of them.

We are reminded to spend our gold wisely, reinforcing the theory that this is a resource management game. Our mission statement, as outlined by our beloved Chief Meat, is to reach the coast (in other words, beat down everything in the auto-path as we move automatically towards the right side of the screen).

Clicking the upgrade button now allows us to include ranged Axe-Throwers, but there is no longer a unit building button for miners. Alas, we are being schooled, the hard way, that we should been a little more frugal with our spending as we are no longer getting an allowance from Chief Meat’s mines to expend as we please. Suddenly the battle is dangerously close to being ended in favor of the bad guys. And so with our final bandaged axe-thrower, we desperately tap our healing button at just the last moment of health (and available cash) until he inevitably eats it and the game is over. OK, we can now confirm, this really is fundamentally, a cash management title. Make some cash, spend it correctly on sufficient units, heals and buffs and get to the other side. Spend your cash and mana too quickly and the game is over.

And so on. With each successive level another variation is added: poison arrows that must be healed lest they DoT your troops to death, or rage added to the soldiers to buff their speed and attack level, bigger, meaner enemy units and war machines that can be power-blasted with lightning bolts, and so on.

No Moar Rolling With The Homies?

While the Wiiware, PSN and PC versions supported split-screen multiplayer, we see no mention of this feature in the iOS version – and considering it doesn’t support online multiplayer, we can understand how trying to cram two players onto an iPad, let alone an iPhone may not be a design priority. The title does have GameCenter support however, so your awesome scores can be posted to the global leaderboards.

Swords and soldiers is about as good as one can expect for the casual gamer wanting some diversion with good retina graphics, easy controls, colorful and well designed GUI and avatars.

Sas has lovely sound design, using the stereo field effectively to pan sound effects left and right based on where you scroll on the map to manage your various active pawns, and a constantly varied and very well produced winsome score that evokes Carl Stalling reinterpreting Bali Hai that keeps you immersed in the environment.

Though the game doesn’t trample new ground in the game-verse, and is a formula we have seen often, particularly on the iOS, we can’t fault it for taking a sad song and making it better.

If you are looking for a fun and engaging scrolling strategy game for when you are stuck in traffic or just looking for a little vacation from the humdrum, SaS has got you covered.

The Official Site for Swords and Soldiers

Get Swords and Soldiers for iOS devices at the iTunes store US$2.99

Review – Choice of Romance and Choice of Intrigues 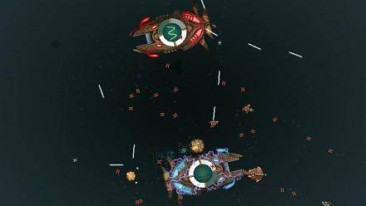 Pax Britannica – The One Button RTS is now on Android