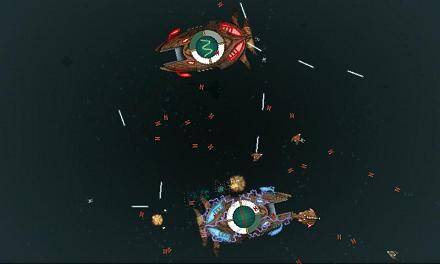 Pax Britannica is a one-touch real-time strategy game by No Fun Games. Two players battle it out underwater, struggling to be the last one standing!

Drop in, sink a ship or two (if you can) and drop back out. You’ll be back. Where’s the Button for Loose Lips?

There isn’t one. Well…there’s a button, but it’s busy doing everything. Pax Britannica was created for the Gamma IV contest in 2010. The purpose of the contest is to create the most engaging game possible without using a control stick, and with only a single button as an interface. In keeping true to the one-touch philosophy that spawned the title, the transfer to touch-screens is a perfect fit.

The factory ship will slowly steer itself in a circular path, locked in a to-the-death showdown with an opposing ship, controlled by the game’s AI. Tapping and holding the screen displays a needle that begins a circular path around an output screen on top of the factory ship. It indicates what ship will be created if the touch screen is released at that moment.

There are three ships available: Small fighter jets take the least amount of time, bombers taking slightly longer, and frigates will require a few seconds to complete. Should enough resources exist, a factory upgrade can also be implemented, though it requires being a sitting duck for a few seconds.

To further complicate things, the factory ship will require some downtime between projects while it replenishes its energy stocks. Should resources run out while holding out for a battleship or a factory upgrade, it will spit out the most advanced ship available, and reset the needle. This will also occupy precious seconds, and when a whole game can be played in a couple of minutes, this can feel like an eternity. The ships built by the factory are all AI controlled, so the fighting is covered. The challenge for the player is finding the right balance of ships. Fighters have the attack power of mosquitoes, but in large enough numbers, they can create an impressive defensive force.

Bombers pack a punch, and will do the most damage to the factory ships, but are easily taken out with enough fighters in the air.

Frigates are slow moving hulks, but their spread attacks can make short work of a swarm of fighters, clearing the way for bombers. Strike the right mix of defence and offence, and maintain it. This is key, and it needs to be established quickly; coming back from an underdog stance and winning is near impossible.

Pax Britannica is a simple title that is surprisingly deep in gameplay. The music is breezy and soothing, and the top down visuals give the battles will have players feeling like shameless gawkers next to tank full of fighting fish.

Take on the capable AI, or two players can play head-to-head on the same smartphone/tablet, with each player taking control of a factory ship and tapping either the top or the bottom of the screen to call their shots. It’s also completely free of charge. This one-button battler from No Fun Games will keep players glued to the screen in two minute doses.

Pax Britannica is available at the Android Market 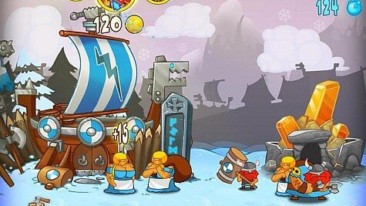 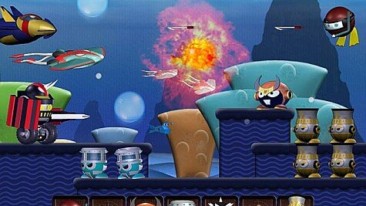