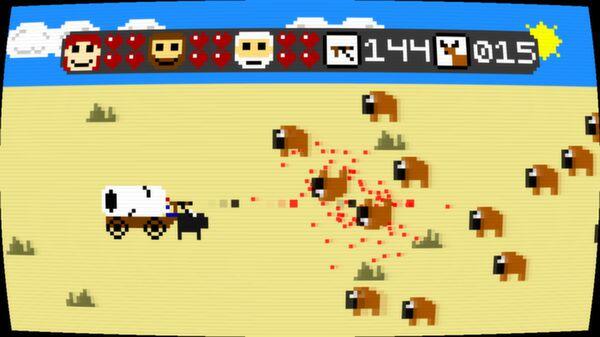 Well the Oregon Trail is the grim tale of America’s yesteryear that just won’t quit. Organ Trail – the zombie re-imagining, the HD remake of Oregon Trail from GameLoft for iOS and Android, and now this crazy thing – a random-story-generating 8-bit title that takes you places as outlandish (literally) as Frog Fractions. Think Little House on the Prairie on bath salts.

Built with the now defunct but community-preserved XNA engine, indie developer sparsevector delivers a game that plays like a super fast Atari 2600 side-scrolling shoot ’em up on a cheapo NTSC monitor with occasional interludes for wandering about to collect berries, explore caves and get eaten by bears or killed by giant bats, or meteor showers.

Huntin’ arachnids in yonder caves. Coulda well have been guns ‘n ammo. But newp, we got spiders.

Because of the randomly-generated outcomes, enemies and scenarios, the game has high replay value, but keep in mind that it technically takes only ten minutes to beat – that is, if you can outlast the constant barrage of bizarre goings-on that you will meet along America’s frontier. Of course, with all the tangents upon which the game will take you, a session can last much longer than a mere ten minutes.

Accomplishing certain feats or reaching certain key points will unlock a variety of higher-powered, canvas-covered wagons, and also some anachronistic alternatives with which to mow down the cute animals and gun-toting bandits that block your path to freedom.

The three members that comprise your traveling party can be customized, but really only in name and gender. Each has four hearts for health, and when these deplete, it is an unequivocal GAME OVER. Hit start, try again.

There really isn’t much else to say – you just have to jump in and see what cards you are dealt as you use that twitch reflex that lives deep within you to handle the duck hunt. There’s some bartering to be done, some decision trees to contend with, no save points or slots, but the real joy is just hitting the dusty trail, breathlessly fragging the shit out of it, and seeing where it takes you.

It is hilarious fun and usually results in very quick and morbid rounds. With full controller support it’s some of the most fun we have had in a while, especially for a couple of bucks. Delivers. 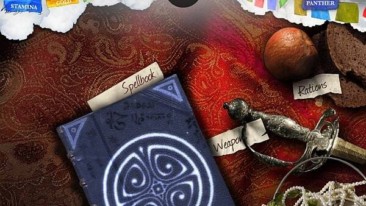 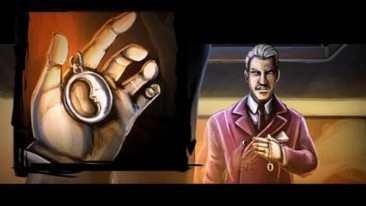