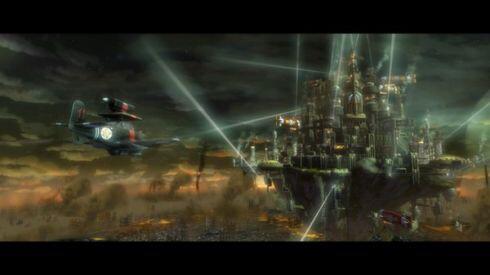 Sine Mora is a horizontal shoot’em up that provides a unique take on challenge, where time is the ultimate factor. Mixing classic shooter sensibilities with contemporary presentation, Sine Mora is a gorgeous shoot’em up that offers a Story Mode that weaves an over-the-top tale and an Arcade Mode that provides deep, satisfying gameplay to challenge fans of the genre. With many ways to manipulate time, Sine Mora features over 50 weapon combinations to complete each beautiful stage that form fits to the player’s skills with scaling difficulty. Soundtrack composed by Akira Yamaoka and featuring boss designs by Mahiro Maeda. When I found out that Suda 51’s company Grasshopper Manufacture co-developed Sine Mora, I almost deleted the game. In fact, there are some people who just stopped reading this review. Goichi Suda, or Suda 51, is probably a really nice guy, but he also polarizes the gaming community at an almost visceral level. Suda is known for making games that are stylistically unique, with storylines that are at times unapologetically absurdist, and that are as much about the experience of the game as the game itself. Or, he’s known for making stupid games that take themselves too seriously, and that only bachelor shut-ins in their 30s who own Sailor Moon DVD boxed sets would actually claim to enjoy.

Suda gets on my nerves. Killer7 was an interesting game, albeit hampered by an awkward control scheme, but No More Heroes was a pretentious, sophomoric, Otaku-bait anti-game that succeeded only in demonstrating how hype and hipsterism can drive sales. Yes, that puts me firmly in the “get off my lawn” demographic, but I’m fine with that. Before I lose the half of my audience that stuck around after seeing Suda in the first paragraph, let me specify that the story itself wasn’t the thing that turned me off. It was the sacrifice of the gameplay to the storyline and atmosphere that was the real tragedy. I thought the idea was creative, quirky, and interesting, and if it were an anime series, I might have watched it. As a game…not a fan.

So, finding out that Suda’s development company was part of the team behind Sine Mora after playing for a few hours was actually for the best. Although Sine Mora immerses you in a “diesel-punk” world populated by anthropomorphic animals in fighter planes who can travel through time, the inherent absurdity of the premise doesn’t really impact how the game plays. It’s a shmup, verging on bullet-hell, and if you’ve ever played Carrier Air Wing or any of the host of 90s shmups that dominated arcades, you’ve got the general idea of the game.

The campaign, which uses plot-driven missions to first teach you how to handle the games particular mechanics, then to tell you the story in all its melodramatic, anime-inspired big robot glory, introduces the game’s unusual relationship to time. Each level is timed, and you must finish the level before time runs out. Killing enemies increases your time, as does reaching various checkpoints. Taking damage decreases your time. In the campaign, and as an optional ability in arcade mode, you can slow time, decreasing the time you have left but bringing the action on screen to a molasses-like ooze. The emphasis on time and its manipulation produces some unusual tactics. Slowing time obviously comes with a heavy price, but sometimes, in the swirling chaos of bullets, enemies, and terrain, the payoff is worth it. Unlike traditional shooters, where low health usually inspires cautious play, low time pressures you into taking risks, trying to kill as many enemies as you can, hoping to make it to the next checkpoint. In practice, you generally don’t notice the difference, but it adds an interesting twist to a genre that hasn’t seen anything new under the sun in some time.

By far the most impressive (and possibly most divisive) aspect of Sine Mora are the boss fights. This may be due, in part, to the fact that they are designed by by Mahiro Maeda whose resume includes Blue Submarine No. 6, The Animatrix – The Second Renaissance and Kill Bill: Vol. 1. Most levels have several, and they’re clearly the centerpiece of the game. Bosses are massive, taking up several screens worth of space, and are fought in multiple stages. They even have their own practice levels which you can select from the main menu. Unfortunately, this is because most of the boss fights come down to memorizing patterns. Now, I’ll acknowledge that this is a feature of the genre to some degree. However, I frequently found situations where my initial encounter with a boss seemed fairly difficult until I figured out where to shoot, and where it would appear on screen. Subsequent fights with the same boss provided little to no challenge. The dropoff was such that I got the point where I’d assume I’d die once at each boss, and then breeze through on the second pass. Of course, some bosses, particularly later in the game, remained challenging, but it was a little disappointing to find so much predictability, and one of the more frequent complaints I’ve seen about the game is that the boss fights, which feel like the majority of the game, are too easy.

Sine Mora is a visual marvel. The art style is a sort of cartoon version of a WWII-era Star Fox. The levels are interesting to the point of distraction, and the vehicles have a sort of chunky tank look to them that reminds me favorably of Metal Slug. I found it particularly interesting that the developers chose Hungarian voice actors, allegedly for the sound of the language (developer Digital Reality is based out of Budapest); if you can remember the last time you heard a Hungarian voice-over, you’ve got me beat. It sounded to my American ears suitably foreign in a way that Japanese, a language I don’t speak particularly well but have encountered in media often, would not. Little touches like Hungarian voice acting and time-travelling bison fighter pilots betray the inspired (or corrosive, depending) touch of Suda 51. Although I’m not a fan of his games (if you haven’t picked that up yet) I really appreciated the unusual nature of Sine Mora’s style and plot. Most importantly, I appreciated the fact that the developers prioritized the substance of the game without losing any style. Although bullet-hell connoisseurs might find the game too easy, and others might find the time mechanic too gimmicky, I was pleasantly surprised by Sine Mora. If the idea of a talking iguana flying a fighter plane through time bothers you too much, just try to ignore it and enjoy the shooting.

Get Sine Mora on Steam 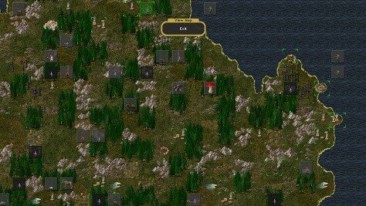 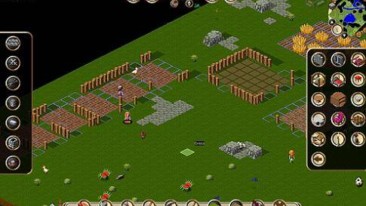 Review: Towns – The Pursuit of a Better-Looking (Don’t Call It) Dwarf Fortress