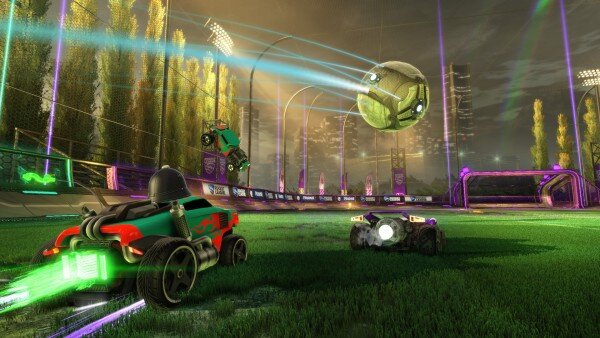 Rocket League – What We Think:

When Rocket League hit the scene about a month and a half ago, it was an immediate smash hit. It itched a lot of spots that have been going un-scratched for quite some time, all the while doing so at a silky smooth 60 FPS, and with shiny graphics to boot. It might have helped that for its first month of release it was available for free to PS+ subscribers on PS4, but it may not have needed even that exposure, given its low barrier of entry and the slew of YouTubers who went nuts over it.

Throw Your Cars to the Wind

OK, calm down. What even is this crazy thing? It’s soccer. Oh, OK…bye.

No, wait! Come back! Yes, you’re actually playing soccer, but instead of a human soccer player, you’re a car with a rocket pack attached, chasing a gigantic ball across a gargantuan playfield. You have the ability to do a short hop and a double-jump, and that’s all it takes to maintain a decent level of maneuverability. In fact, it’s so spot-on, that you’ll feel it’s your own damn fault when you miss your charge at the over-sized ball, again and again.

Driving, jumping and boosting are your only tools, yet they are enough. Double-jumping to the side allows you to drive up to the side of the ball and bunt it sideways, out of the way, or as a save against shots on your goal. You can even drive up under a ball and do a “bicycle kick” that’ll pop you up and make you immediately stop moving so it’ll bounce back off you.

Boosting can allow you to catch back up to the action, become airborne and make an amazing aerial “kick” before a ball that was popped above everyone’s hoods comes down low enough for the rest of the cars to knock it away. This is where the skill ceiling raises its highest and will no doubt be the subject of many a Rocket League-related GIF.

A little while ago, Psyonix also released its first DLC and a free content update. The update contained a new arena, a slew of server-hosting improvements, a pile of new flag designs and some free cosmetics to apologize for the slow servers during launch week (due to the game’s unexpected popularity).

The DLC includes 100% cosmetics and is completely optional. It effectively acts as a gift for a tip jar, like getting a tote bag for donating to a charity cause.

The DLC, named as a call-back to the mostly-unnoticed first version of the game that appeared on the PS3, is the ideal way to handle DLC for an online-only team game like this one. It does not split the community and it does not give any sort of advantage to players who purchase it. It is purely an “I like this game, please allow me to show my love of it by further supporting it” option.

And speaking of splitting the community, the servers are shared between the PS4 and PC player bases. It may, however, be a little difficult to get paired with friends on differing platforms.

Kick It into High Gear

With high quality visuals, precision controls, and a novel, ridiculous fun factor that you can enjoy even when you’re losing, it’s no wonder that Rocket League is going to earn full marks here.

Get Rocket League on Steam

Get Rocket League at the PlayStation Store

Watch the trailer for Rocket League below: 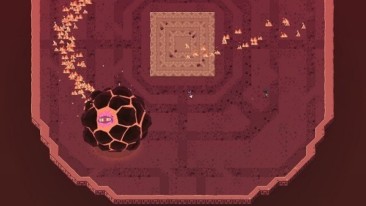 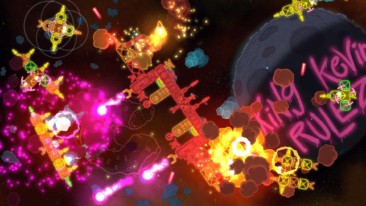