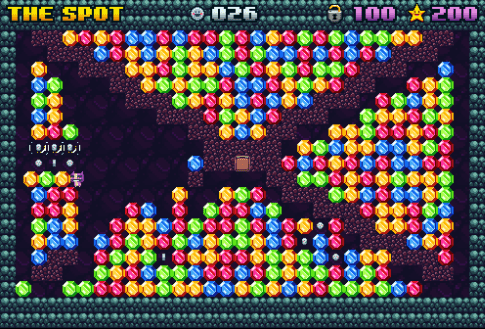 Pushcat borrows the basic dig-and-push mechanics of Boulder Dash and adds elements of Match 3, resulting in an original, fast-paced mix of puzzle and action arcade gameplay. Stylistically it unashamedly takes its cues from the golden age of videogames with crisp pixel art and retro music. The player plays the eponymous Pushcat, a purple cat who just loves silver – which he gets by combining gems of the same colour. As the game progresses new elements are gradually built on top of this basic mechanic, then mixed and matched to produce a wide variety of different play experiences.

I loathe retro. I see it as an excuse that developers make when they don’t want to bother learning to work with modern game engines (some of which can be had for free), or acquiring the artistic talent necessary to create something original and aesthetically pleasing. Maybe it’s because I actually lived during the 80s, owned an Atari, and played Pac-Man in a non-ironic way, but I’m ready to move on. If the nostalgia for Mario Bros. becomes too overwhelming, I’ll just go play Mario Bros. Don’t get me wrong, I’m not saying every game has to set my video card on fire to be considered “quality”; I’ve played some excellent games recently that had very modest hardware requirements but still looked absolutely amazing as a result of good design and talented artists. I’m just saying that, to me, it all smacks of laziness barely disguised as art. And considering how many really talented, hard-working developers will put out games this year that are doomed never to get off the ground, it’s offensive to see retreads of old games trotted out as if they aren’t someone’s “Introduction to C++” final project.

I launched into that tirade for a reason, and, believe it or not, it’s to say that I don’t hate Pushcat. I was far from bowled over, but I actually found the game kind of enjoyable in a fussy, gem-matching puzzle-solving sort of way. I expected jumping puzzles, and what I found instead was a surprisingly slow-paced, deliberative game somewhere between Minesweeper and Dig-Dug. To it’s credit – Pushcat’s randomly generated levels and multi-layered puzzles are where it endeavors to take things a step further than most Bejeweled-type offerings. For this reason it gets an extra half star because it does it with mucho gusto.

It’s retro, sure, but it’s retro for people who remember when retro was normal. For those of us on the other side of 30, we remember games like Ninja Gaiden (the original) largely for the number of broken controllers and profanity-laced meltdowns they inspired. And that was when we were young and spry. That’s not an experience I want to relive.

So, although I initially sneered at the typically hyper-80s style graphics of the game, I found myself appreciating the slow pace. I would spend about fifteen minutes a sitting playing one or two levels, slowly analyzing the layout of the blocks, mapping out the consequences of pushing this one or that one, all while the game’s strangely hyperactive ragtime soundtrack tinkled away in the background. If you’ve ever been to a casino and seen old people sitting in front of slot machines, grinding away at their retirement checks accompanied by the likes of Night Ranger or Kenny Loggins (especially “Danger Zone”), you’re in the right neighborhood. Fifteen minutes was the magic number. Past that, and, level complete or not, I stopped caring. At first I took that as a bad sign. There were clearly a number of maps to clear before I could move on to the next world, and, at this rate, it would be a week before I got anywhere near done with the game.

And then, I had an epiphany.

Pushcat is a game for the retro generation. Not for the kids who want to pretend it’s the 80s, but for the people who were kids in the 80s. There’s no time limit for a level, no three lives until you start from the beginning. There is some challenge in getting a high enough score to move on to further maps, and some of the map designs are very clever, but you’ve got as much time as you’d like to solve them so there really isn’t any pressure. If you get called away during a game, the worst thing that will happen is the cat will tap his or her foot impatiently until you return. There is no impetus to play other than to take your mind off of something else. It’s the digital equivalent of skipping stones, or tossing cards into a hat. In a way, it’s an incredibly pure expression of the video game as an amusement, in the literal sense of the word.

So, despite being continuously smacked in the face with the retro-ness of the game, the pace and utter lack of pressure lulled me into the “turkey-coma” of gaming. To be strictly accurate, it wouldn’t be correct to say that I particularly like Pushcat. I think it would be more appropriate as a smartphone app than as a PC or Mac game—it sure doesn’t need the hardware, and the bite-sized levels would be a good fit. The lack of pressure or motivation to proceed through the game means it has to rely solely on the entertainment value of its core mechanic, and — let’s not kid ourselves here — you can only push so many blocks before it gets old.

I will say this for Pushcat: it’s a good distraction. It’s not much of a game, but it’s a good way to while away fifteen or twenty minutes without reminding yourself how slow your reflexes have become. If you can get over the retro mashup of Bubble-Bobble, Dig-Dug, and the general “gaming stopped with the NES” design aesthetic, you’ll be lulled into a peaceful slumber by the deliberate pacing. It’s honestly too difficult to become invested enough in the game to hate it, but there’s just not enough here to love. Taking no risks, breaking no new ground, and keeping firmly within the least-demanding requirements of the industry, it is the “gentleman’s C” of indie gaming, so if you already have a puzzle game that you play when you don’t really want to play a game but have to blow a few minutes, feel free to pass this by.

Buy or demo Pushcat via the Official site 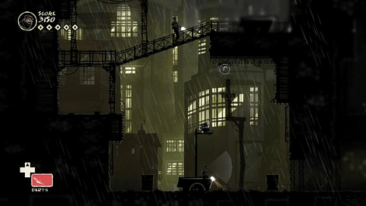 Review: Mark of the Ninja (XBLA)