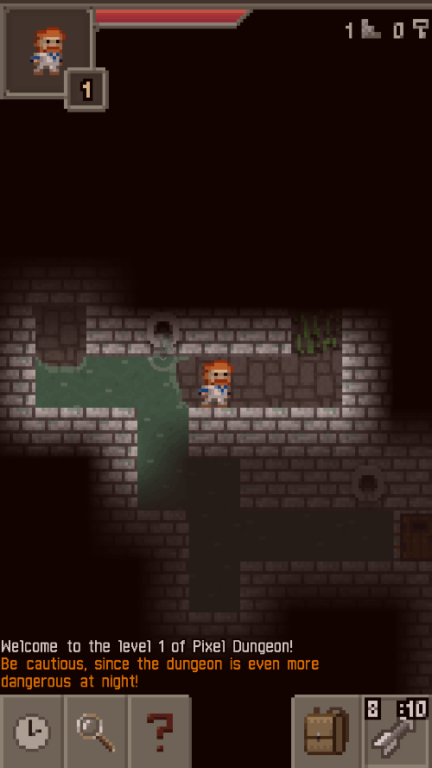 Pixel Dungeon – What We Think:

Inspired by Brian Walker’s Brogue – a true-to-form ASCII-based Rogue-like, Pixel Dungeon by Watabou is a title I picked up as a Free App of the Day from the Amazon App store. It turned out to be an excellent choice for Android handheld devices for those moments in between larger events in your life. Likely what Watabou credits Brogue with, is the concept of a slightly less-than-sadistic Rogue-like with more flowery prose to accompany the events of the game.

Because of its randomly-generated nature, every adventure offers a new map layout, monsters and item placement, thus you are unlikely to get bored as you aspire to delve ever deeper into the nicely varied adventures that await you.

The crux of it – beyond discovering new monsters and loot – is to see how long you can survive and level up so you can post your best progression to the online leaderboards. You can play as one of four classes: a warrior, mage, rogue or huntress, starting off in the city’s sewer system before you descend in search of fortune and fame.

Pixel Dungeon uses a clean, nicely crafted retro 16-bit art style that is responsive and looks great on tiny screens (on my Amoled Samsung Galaxy S4 screen anyway). To move around, simply tap your desired destination and your character quickly zips over to it. You will explore a level until you find the staircase leading down. Sometimes you must find a required item or key to progress. Also, there are often secret doors which you must discover by tapping the perimeter of a given room that you are in.

Remember What The Dormouse Said

There are many spells and potions to be found, many of whose function you will not know until used. At times, Pixel Dungeon brought Desktop Dungeons to mind as well, with its whimsical use of titles for scrolls, that give some sort of hint as to its possible effects. You can also use an identifying scroll to ID the many interesting items you find with magical properties, and other scrolls to upgrade them. 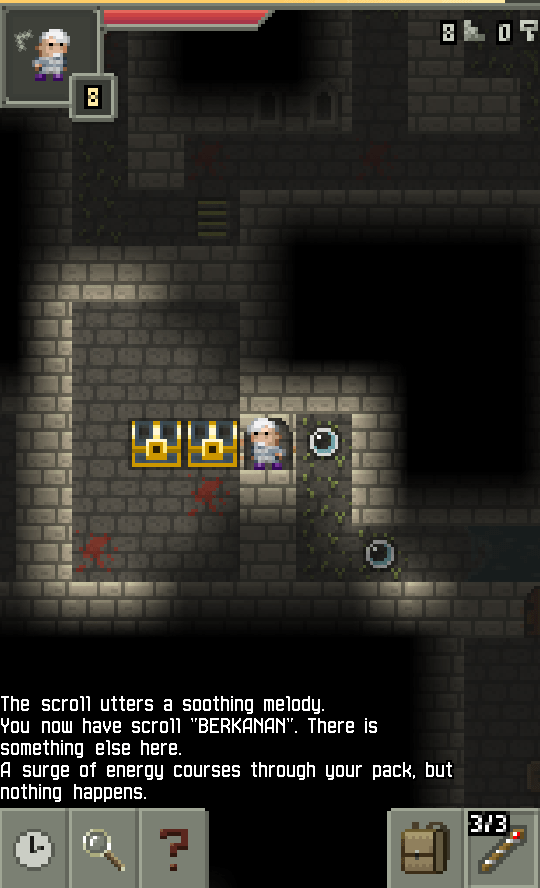 There are also seeds scattered about that you can sow to grow a variety of plants with interesting effects, and dew drops that you collect in a special vial for other benefits.

In fact, I was pleasantly surprised at how rich an experience this diminutive fantasy title had to offer; nothing you wouldn’t find in a desktop title in the same genre, but more than I expected when I first downloaded it. Every action you or your enemies take is described in text at the bottom left of the screen so you can always figure out exactly what just happened. but beyond mere stats, the text also adds some narrative flair.

In fact, this mobile game did exactly what a good mobile game should – it called out to me often, and I found I would actually opt for my phone over my tablet or Steam PC so I could make another attempt at discovering what lay within the belly of the dungeon.

With no IAPs or even ads to kill your buzz, I have become a quick fan of this tribute title and recommend it for those moments when you want to game, but can’t manage access to a larger gaming device than your phone. Though it isn’t earth-shatteringly innovative, Pixel Dungeon offers a well crafted, smooth experience for fans of Roguelikes, procedurally generated games and dungeon crawlers alike.

Did we mention it’s free? The developer states on the game’s home page:
“I’m making this game for fun and I’m not going to monetize it. Nevertheless people ask sometimes, is there a way to support the developer (that is me), so I’ve added the “Donate” button (via PayPal)”.

So do support the developer if you enjoy this game as much as I have. 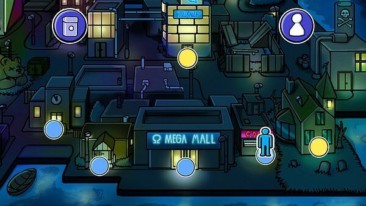