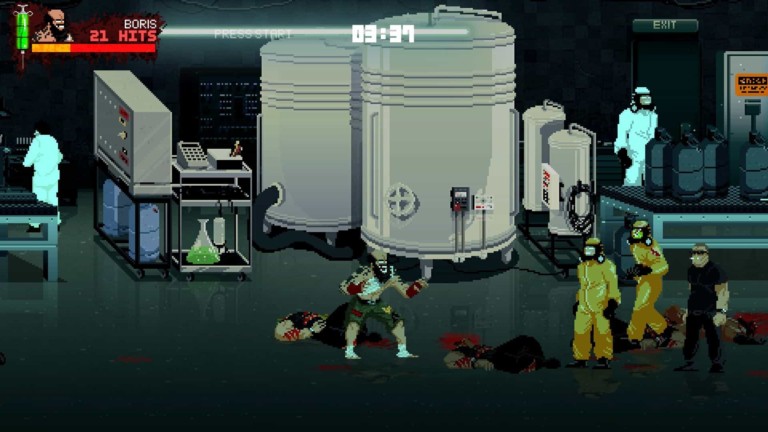 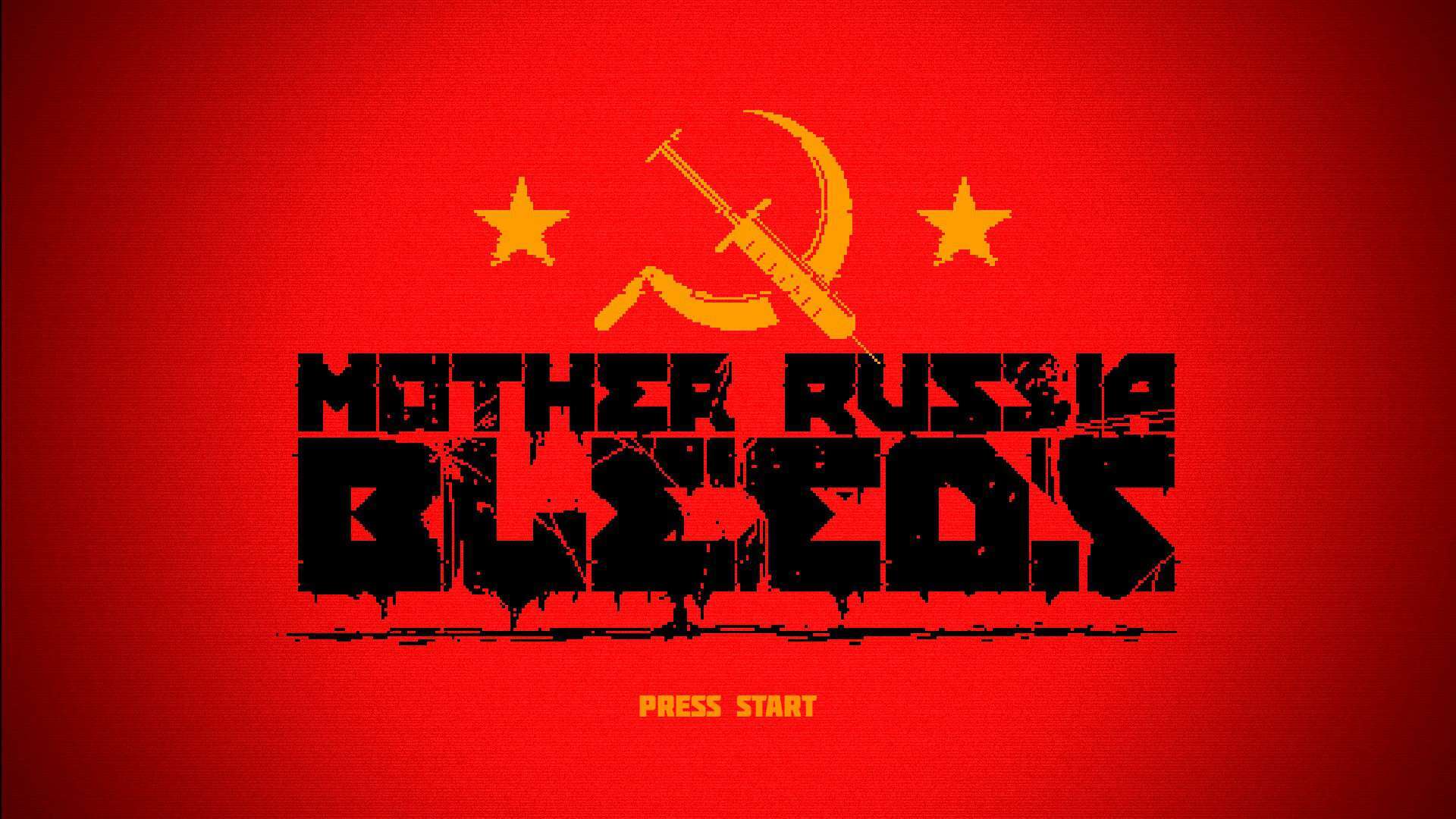 1986 was an exciting and tumultuous time for Russia, then known as the Soviet Union or USSR. That year saw the launch of the MIR space station and the disaster at the Chernobyl Nuclear Power Plant, along with many political changes under the communist regime. It was a time for nuclear disarmament, progressive ideas and a great year for the USSR in regards to hosting worldwide sporting events.

But what if there was another side of the USSR not overly exposed to the public? What if there was a seedy underbelly in the wake of nuclear devastation, in which human/monster hybrids fought for control over drug regimes? This is the world that Mother Russia Bleeds by Le Cartel Studio weaves, in the form of a gritty, overly violent side-scrolling brawler not for the easily offended. 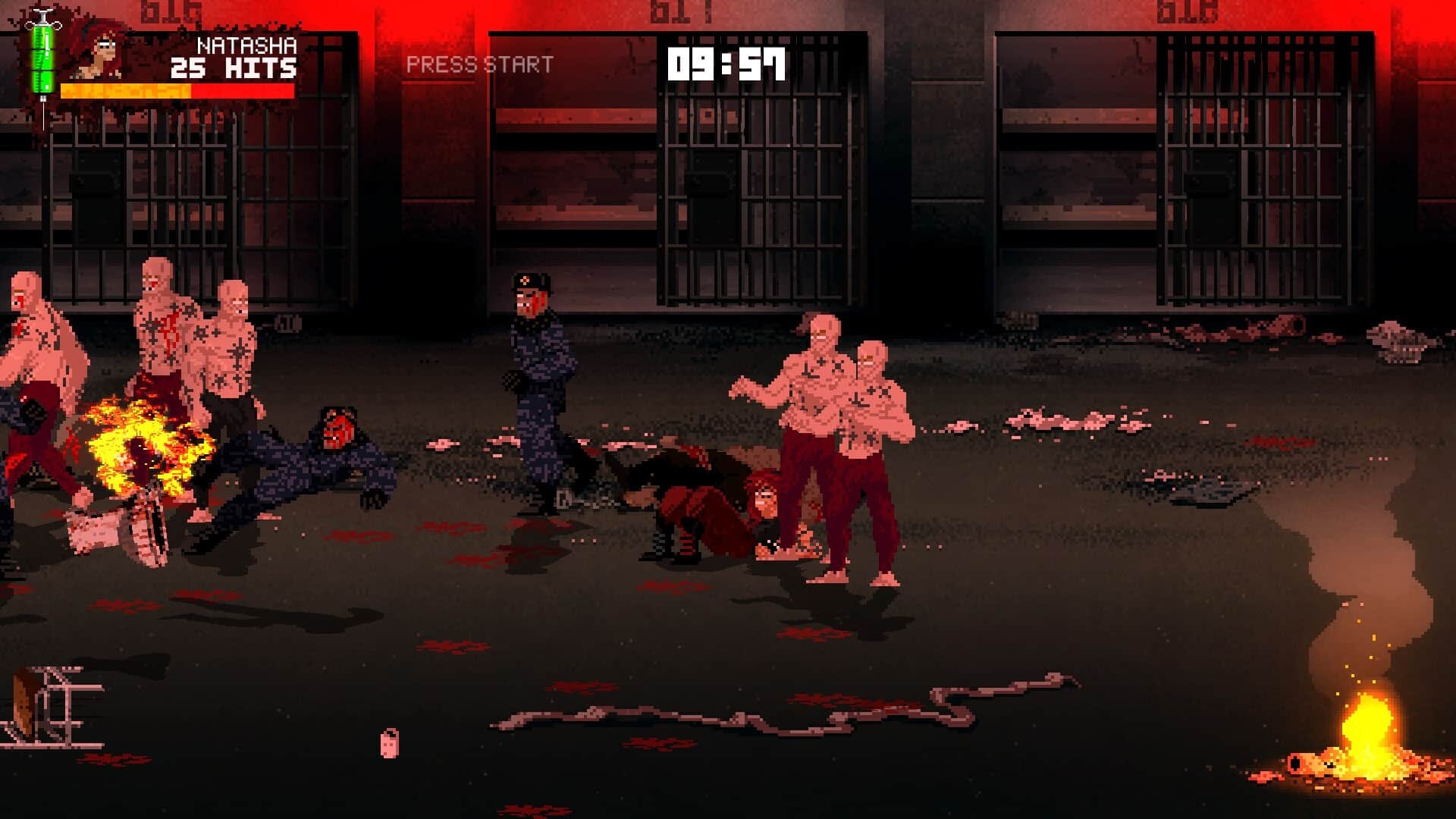 Fight for your Rights

Essentially an adults-only version of Golden Axe, Mother Russia Bleeds lets the player take control of one of four unique characters with variable strengths and weaknesses. Whether the player values strength, speed, well-rounded stats or straight up psychopathic, every base is covered. The game can be played single-player – with or without a bot – or two-player co-op.

Each character shares the same basic controls: punches, kicks, jumps and grabs will help decimate the hordes of angry thugs that constantly appear on each side of the screen. In addition to this, each character also possesses a unique taunt, certain to fulfill any need of over-the-top vulgarity. I mean it, my personal favorite character’s taunt consists of defecating into his hand and throwing it into the face of his opponent. That should provide some insight on just how graphic the subject matter of this game is.

Blood and gore play a key role in the identity of Mother Russia Bleeds, and I feel it works really well to define itself as something different. It fits seamlessly with the storyline, which is full of political uprising, defeat of the proletariat and the struggle of an impoverished community to escape home in search of a better life. 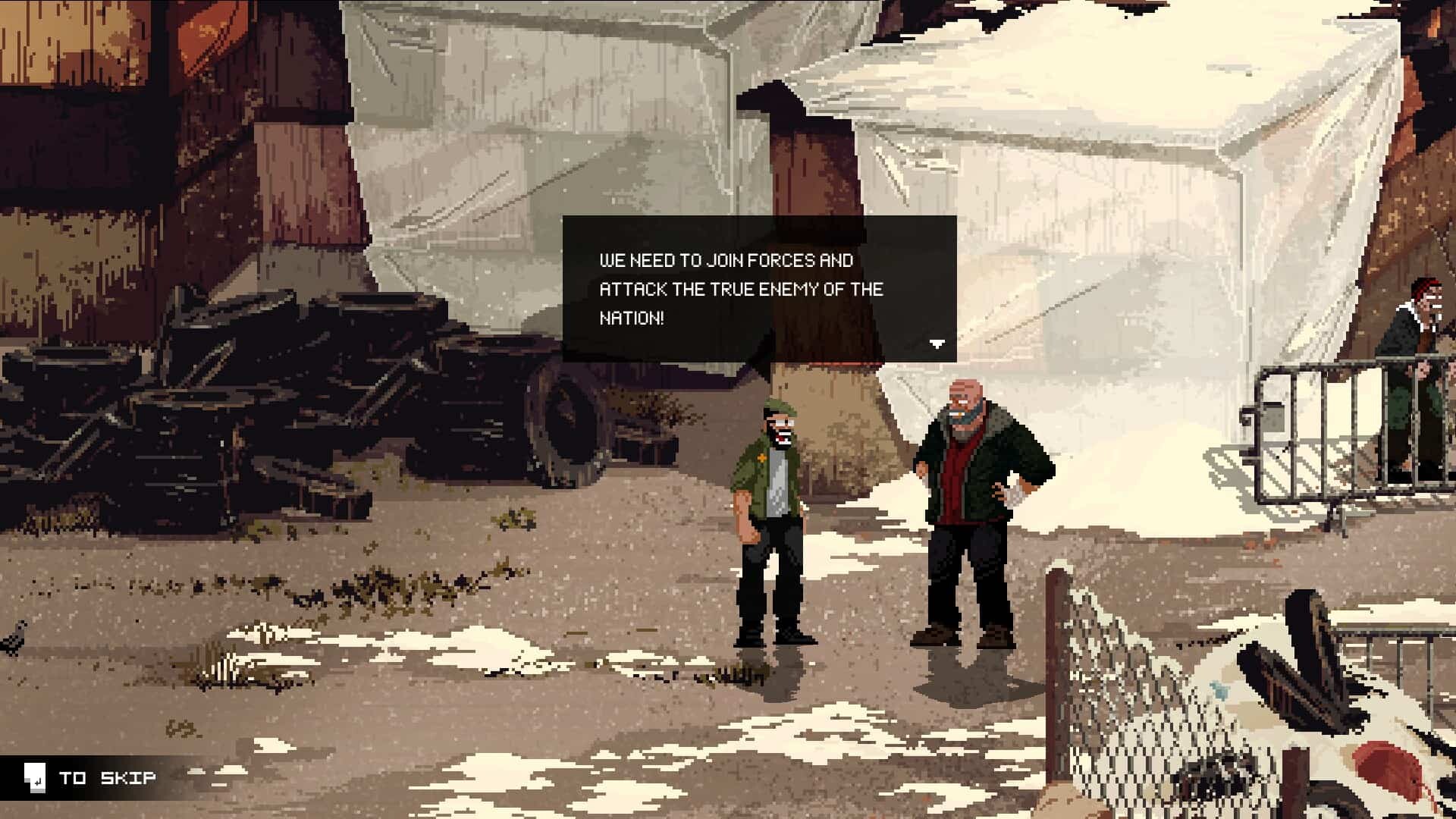 Say No to Drugs

Another identifying element in story and gameplay is drug addiction. In addition to fighting off junkies and crackheads, the main characters themselves are addicted to a harmful injected chemical called Nekkro. This can be disgustingly extracted from deceased enemies previously hooked on the stuff, and in turn used to either heal the character or provide a temporary power boost.

Combat is simple but won’t reward the button-mashers. Taking the time to land hits with precision and deal with certain amounts of enemies using different fighting tactics not only increases your level score, but is also more rewarding. Speaking of rewarding, there are a wide variety of weapons and projectiles that can be used to wreak additional havoc upon enemies. From knives to chairs, streetlights to guns, there is no shortage of new and exciting ways to eviscerate all of those you oppose. 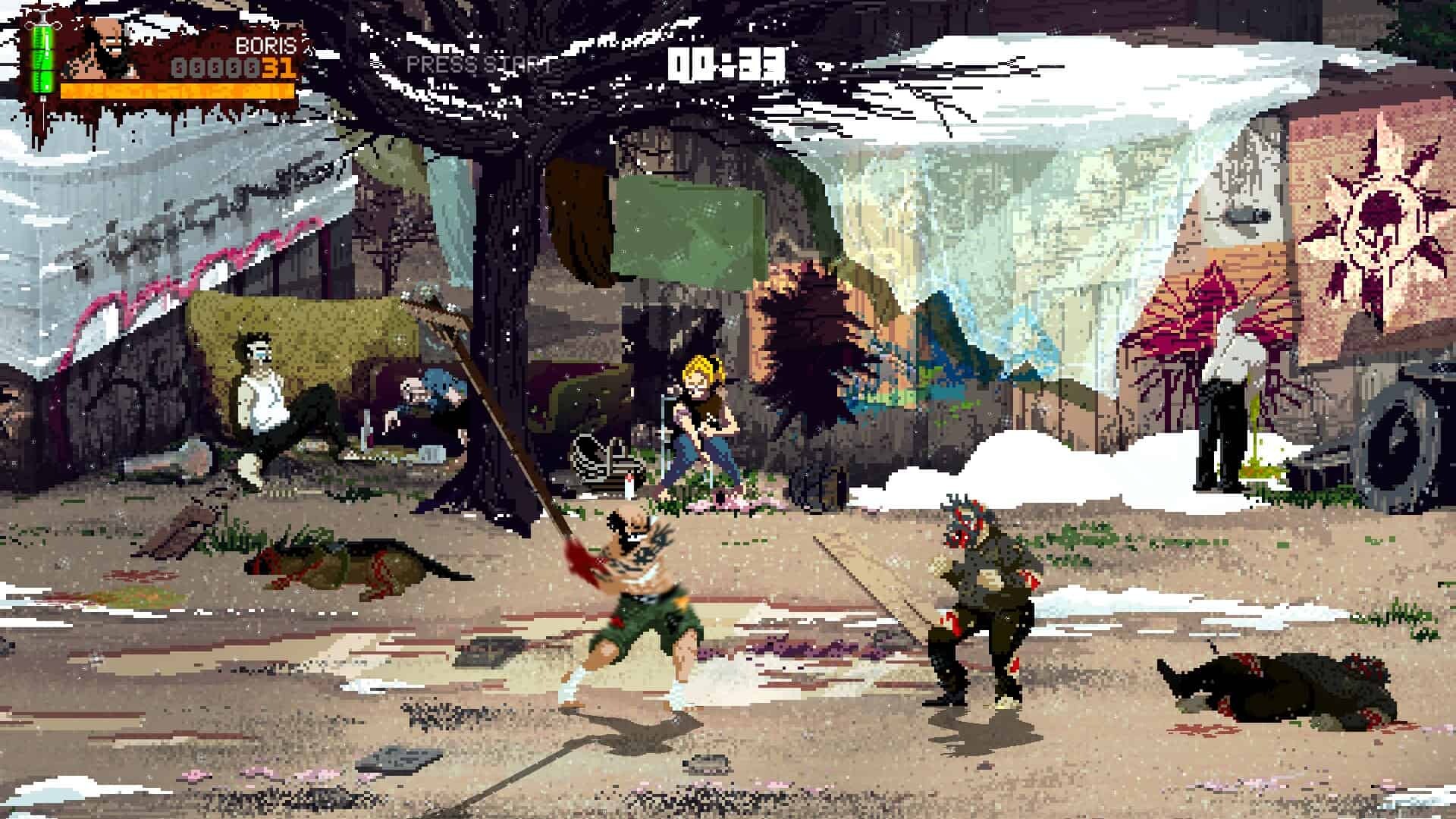 With two gameplay modes (Story Mode and Arena) there is no end to the bloodshed. The Arena is an endless massacre that would excite the likes of Tarantino, and the Story Mode has eight fairly lengthy stages with a boss at the end of each.

It can take anywhere from four to six hours to complete the main storyline. The boss enemies at the end of each level fit precisely into many side-scrolling brawler tropes. They’re colorful characters who hit hard but have one very specific weakness. Be that as it may, they still provide a decent challenge at the end of a level, providing a sense of accomplishment with the resulting defeat. 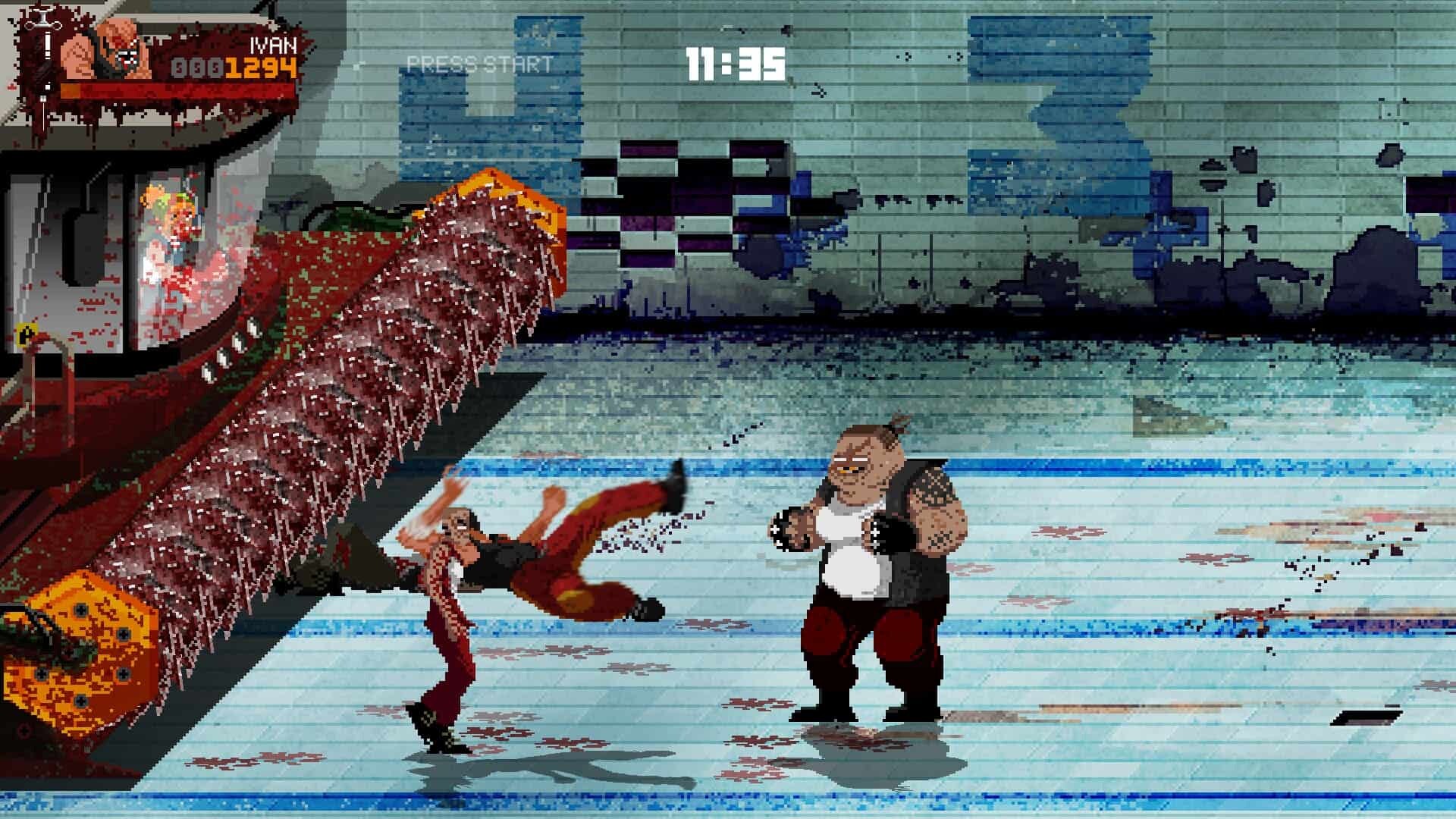 As a young child, I was obsessed with Maximum Carnage on the Sega Genesis. A game that still holds its own after all of these years, keeping my expectations very high with brawlers. Mother Russia Bleeds has everything I’ve always loved about the genre. Accurate and variable controls, a dark and exciting story and game changing abilities make this title feel new yet nostalgic.

Published by Devolver Digital (known for the Hotline Miami series), Mother Russia Bleeds is as dark and gruesome as it is humorous and offensive. Those are a lot of negative adjectives, but for my twisted tastes, it’s exactly what the doctor ordered.

Watch the official trailer for Mother Russia Bleeds below: 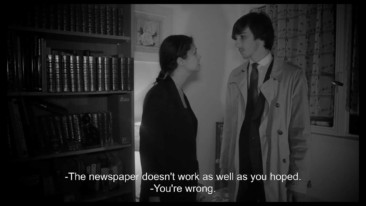 Review – How to Shoot a Criminal 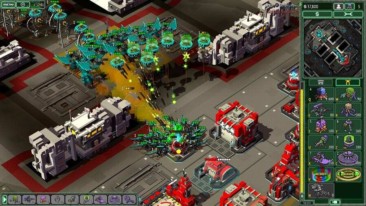