Labyr is a simple atmospheric arcade-rpg, where every time the character dies he wakes up in a different environment with his old stats and stuff. Eventually, in the cicle of death and respawn he ends up back in the first world. If you like arcade-rpg and atmospheric games, defenitely check it out!

Labyr is a simple (very, very, very simple) atmospheric arcade RPG. At least, that’s how the developer describes it. Even that description is very very loosely worded. A search on the internet will turn up no noticeable results on this game, and maybe there’s a reason why. Just after looking at the screen shots sent to me by the developer, I could immediately tell this game might be, for lack of a better term, interesting. But we don’t judge a book by it’s cover, or appearance here at Indie Game Reviewer so I sucked it up and started to play. Even after playing for as much as I could stand, I’m still not really sure what to say about this game. So let’s go through the positives before we move on to the negatives.

The soundtrack. The soundtrack in this game is pretty great, consisting mostly of electronic, upbeat, fast-paced music. It seems almost as if they spent more time making the music in this game than anything else. The music was able to create a somewhat energetic feeling that neither the graphics nor storyline (if there even was one) could convey. And, well, that pretty much concludes what was enjoyable about this game.

The graphics look like they were drawn by an elementary school child with Windows Paint, and consist of characters that just slide around the screen in a Pac-Man like floating motion sans the waka waka. As far as I could tell there was no point to this game. It was impossible to tell if there were any objectives to complete, let alone how to go about completing them. You float around the screen aimlessly. There is no combat, enemies will just run through you until either you or they, die. Don’t stand around too long after an enemy dies however, because it will respawn in the exact same spot in about three seconds.

Every once in a while, little dialogue boxes will pop onto the screen, (rife with spelling and grammatical errors) that don’t explain anything important, but instead turn out to be attempts at introducing humor. Most of it doesn’t hit home, or make sense. It seems like the developer had a clear idea in their mind, but simply wasn’t able to transfer it to the player.

The Good, Taken Away

Unlike the music, the sounds in this game really bothered me; it sounds like a twelve-year-old recorded himself making weird noises into a microphone, and then set those sounds to repeat every single time you collect a certain object. This was enough to make me turn the audio off completely after five minutes of gameplay, thus rendering any enjoyed derived from said music moot.

At this point, I have nothing else to say about this game. I don’t like writing negative reviews, but this game just really rubbed me the wrong way. It’s poorly planned, poorly executed, and a poor product. I can’t think of a niche of gamers that would enjoy this game to be completely honest. There is no info in the press kit about how much this game costs or where the public can get it, but that’s okay I wouldn’t recommend hunting it down in any case. Breath of Death VII AND Cthulhu Saves the World coming to Steam! 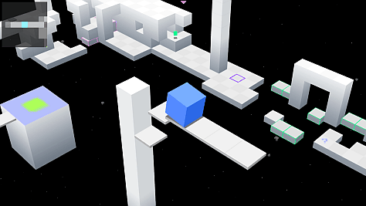