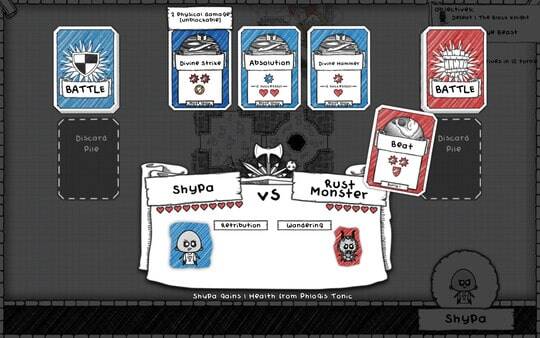 Guild of Dungeoneering – What We Think:

A roguelike for the super-casual, Guild of Dungeoneering is a simple deck-building dungeon crawl that you can play in bite-sized chunks. Your heroes are not directly controlled by you, rather, you must entice them through your placement of room tiles. You’ll also fill the rooms with monsters to slay and treasure to collect.

Guild of Dungeoneering is immediately endearing, opening with a tavern song about the Guild itself which is cheery, funny and clever (the music is by far one of the game’s high points.) Songs continue to unlock as you advance your guild and complete (or fail) your dungeon runs. The music during gameplay segments includes atmospheric pieces for dungeon crawls to downright catchy numbers.

As for the actual monster fighting action, well…it’s casual. You draw three cards, and – after the monster you are fighting shows its card – you can respond with your own. Effects are fairly varied, including life drains, blocks and counter hits, as well as attacks that actually do more damage if your opponent played an unblockable attack. Additional effects can trigger if you use certain attacks or deal damage past a determined threshold.

Before you enter a dungeon, you can choose a class and a perk. Most starting perks appear to be temporary buffs to help you get started in new runs, but later ones offer more permanent effects. Your class choice determines your starting deck of cards and possibly an extra perk.

One Apes, the Other Is an Ape

For example, of the early classes – the Bruiser and Mime – the Bruiser has reliable attacks that damage and block, but he also has a perk that allows him to deal extra damage when he blocks. The Mime has no perks, but has a lot more card-manipulation effects. This makes choosing your hero before entering a dungeon a bit more important, as a physically-oriented hero won’t do very well entering a dungeon that’s focused on blocking physical damage.

As you go through the dungeon, you collect loot from defeated monsters, and new cards that represent the items are shuffled into your combat deck. Many dungeons have a victory condition of fighting a final boss monster, so collecting loot before facing him is required to survive the encounter. Every time you start a level, your hero will be without equipment; they’ll have only one perk chosen out of your pool of upgrades in addition to their starting class cards.

Dungeon Crawl Before You Learn to Dungeon Walk

In spite of these strategic considerations, GoD is still super simple. Beating chapters will open up new areas, with new dungeon zones featuring new looks to them. New monsters will have different attacks and be much much stronger. You may even have to grind for gold in previous dungeons to afford enough upgrades to for your character to survive long enough to get proper equipment in the tougher levels.

Guild of Dungeoneering is clever, cute, funny… but it’s definitely something to reserve for doing while you do something else. If you do multi-task, though, you’ll want to put everything else on hold every time you win or lose so you can properly enjoy the bard’s newest limericks.

Get Guild of Dungeoneering on Steam

Watch the trailer for Guild of Dungeoneering below: 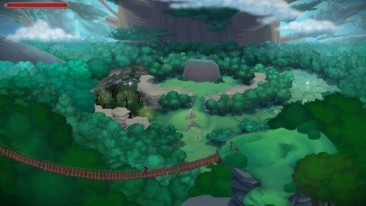 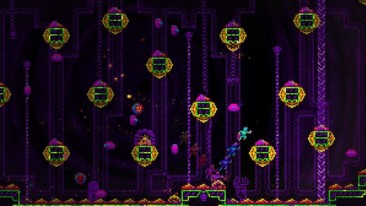