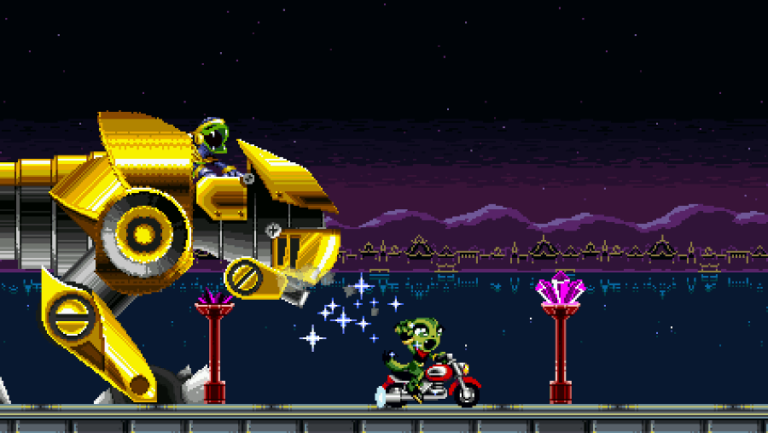 Freedom Planet – What We Think:

Usually when a platformer is released it falls into two categories -it’s either focused on delivering a challenging platforming experience, or an action beat ’em up with platforming being secondary, but still necessary. Freedom Planet by GalaxyTrail definitely lands in the latter category, since it offers a fast, nonstop, action-heavy ride that incorporates a lot of jumping and even more fighting. 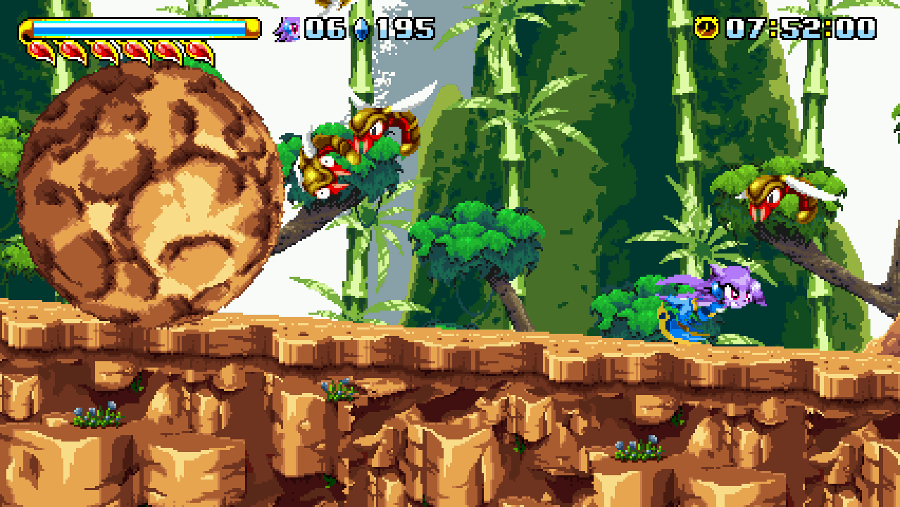 After the opening scene that spells out the looming danger of the main characters’ world, you’ll soon be able to take control of either Lilac or Carol. Both characters have their own unique movesets along with strengths and weaknesses. Lilac is the more offensive character, with a double-jump and an air dash ability, both of which can also be used as an attack. Carol, on the other hand, does not have many offensive moves in her repertoire, but her ability to wall jump makes traversing through levels easier. Both characters have their own feel to them, which makes playing as either one feel vastly different from the other.

Since the game is more focused on combat, Lilac would seem like the obvious character to play, but that’s not the case. Levels in the game are designed well enough that it caters to both characters very well. Oftentimes, when games have multiple character traversing through the same levels, bonus or secondary characters can feel like fish out of water. Levels designed for a specific character are either more difficult or not as fun. Freedom Planet avoids this issue by making levels designed for multiple characters. It’s balanced and feels really good either playing as Carol or Lilac.

Combat in this game is fairly standard. Each character has their own array of attacks that can be executed at given times. There is a special meter on the upper left side of the screen that automatically replenishes after it’s drained. Mixing up the different attacks in the game is key if you want to succeed. Utilizing Carol’s ground spin attack to get behind enemies and avoid incoming attacks. Performing Lilac’s downward kick to get some extra damage in on an enemy the way down is another effective move. The combat system is not as in-depth as games like Shank, but what is there is plenty to keep combat from feeling monotonous.

Levels in this game are very important, and the level design in this game is fantastic. Levels never once felt or looked the same. Even within levels the scenery can change drastically. In one level you’ll go from a lush green valley environment to a crystal cave, both areas with their own unique enemies and music. Nothing in this game feels like it’s been cut and pasted together in a lazy way. Even the bosses in this game are all different and highly entertaining to go up against. It’s a joy to experience the many different levels the game had to offer.

Most of the levels in the game are designed to not impede progress. If you miss a jump, it’s easy to get back to where you were without much backtracking. If you’re lost, it’s easy to find your way around, since there are multiple routes through levels. It offers a great amount of freedom without feeling too linear or constricted. This freedom makes levels less frustrating and more about giving the game a much smoother flow to its pace.

There is a wide assortment of enemies. I can’t recall two enemy designs being the same. The enemies you go up against range from easy to challenging. Some have weak points that you have to hit; others are a bit stronger and serve as mid-level bosses. The game keeps you on your toes by throwing a much appreciated varied barrage of enemies and scenarios at you throughout the game to give it a feeling of unpredictability. 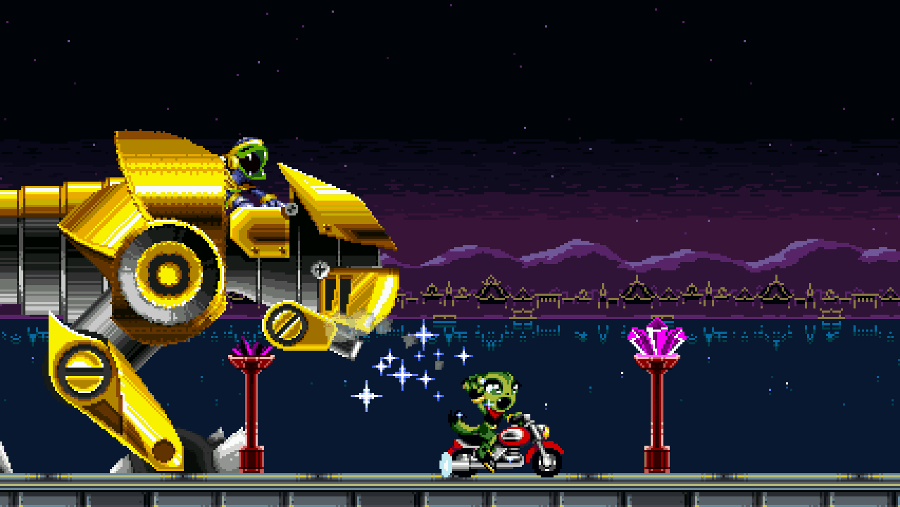 Freedom Planet feels like an older game, since it’s characters are designed in that classic mascot sort of way. The anthropomorphic characters are likable and somewhat endearing. It’s easy to draw comparisons to the Sonic the Hedgehog series of games, which heavily influenced the game. Levels have the same 360 degree loops than Sonic had to traverse through. Carol has the same “curl up into a ball while running move” that Sonic had. It’s inspired and owes a lot to the Sonic the Hedgehog series but never feels like a copycat. People will undoubtedly write this game off as some Sonic the Hedgehog clone, but it’s far from it. Freedom Planet manages to be its own thing while still paying homage to that classic platforming series.

The narrative in Freedom Planet does a good enough job to keep you entertained. It’s basic enough to understand but not deep enough to sink your teeth into. Characters are more developed than complete paper cutouts but not enough to create a more engaging narrative. You eventually do start to care about them a little bit, and I started to get invested into the very subtle relationship dynamic of Lilac and Carol, but it doesn’t explore those dynamics as much as I would have liked, instead focusing more on its main sci fi plot.

The game’s plot is centered around the actions of an intergalactic warlord known as Arktivus Brevon. Brevon crash-lands on the planet and decides to steal its powerful, energy-filled relic, the Kingdom Stone, to repair his ship. Lilac and Carol, with the help of friends they meet along the way, must find a way to stop Brevon before it’s to late. It isn’t the best aspect of the game, but it is enjoyable even if it does feel generic. If the plot is the weakest aspect of Freedom Planet, that’s just because everything else in the game is so stellar. 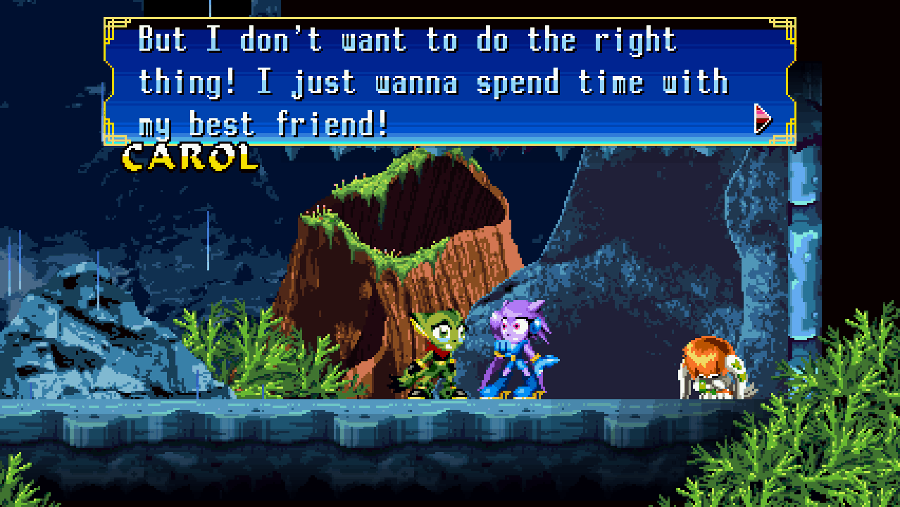 You can tell that a lot of heart that went into Freedom Planet. Attention to detail, from clever level design to inspired music and even the idle character animations, screams top notch from every angle. Very rarely do games feel like they capture that heart and soul. This one feels more like an inspired work of art and less like an experiment haphazardly put together. It’s rare to see a game with so much heart executed so fully in every regard; it’s impressive to say the least.

Freedom Planet is a fantastic 2D platformer. Whether it’s the wonderful visuals, fun combat, great level design, or catchy music, it executes on so many levels to create a game well worth your time. It’s one of the best platformers I’ve played in years. It’s one of the rare games that I’ve played recently that feels like an inspired passion project, which is something that I appreciate. If you’re looking for a great game to play, I highly recommend you give Freedom Planet a shot.

Get Freedom Planet on Steam

Watch the trailer for Freedom Planet below:

One thought on “Review: Freedom Planet – How Good Is It?” 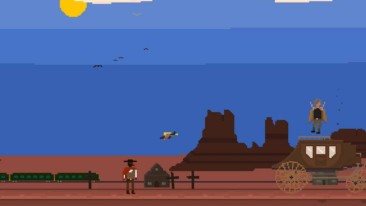 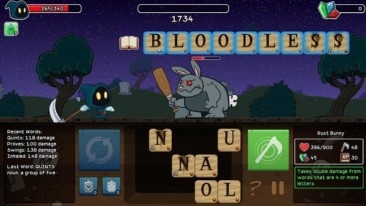