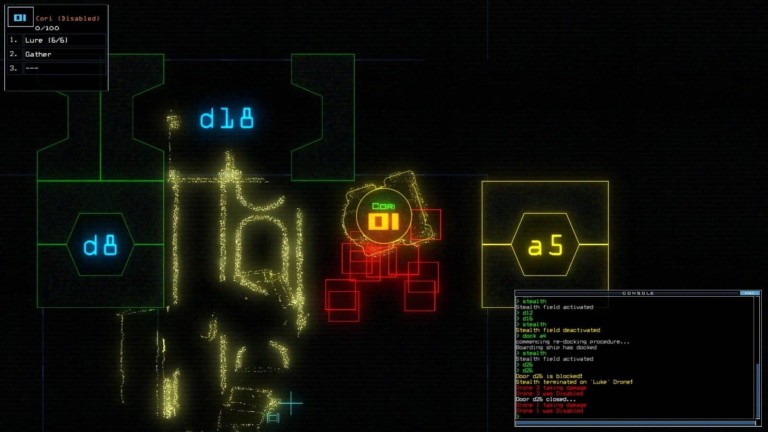 Duskers – What We Think:

Duskers, the ambitious new game from Misfits Attic (best known for A Virus Named TOM), is an innovative new take on space exploration. Instead of vast new vistas and civilizations to encounter, Duskers’ universe is eerily dead. From star system to star system, evidence of former human life abounds, but it’s all wreckage: derelict ships and ruined space stations floating silently in the vastness.

As perhaps the last living human, you’ll need to explore these ruins for scrap to keep yourself – and your little posse of remote control drones – alive. Live long enough, and you might even find out what happened to the rest of the universe. 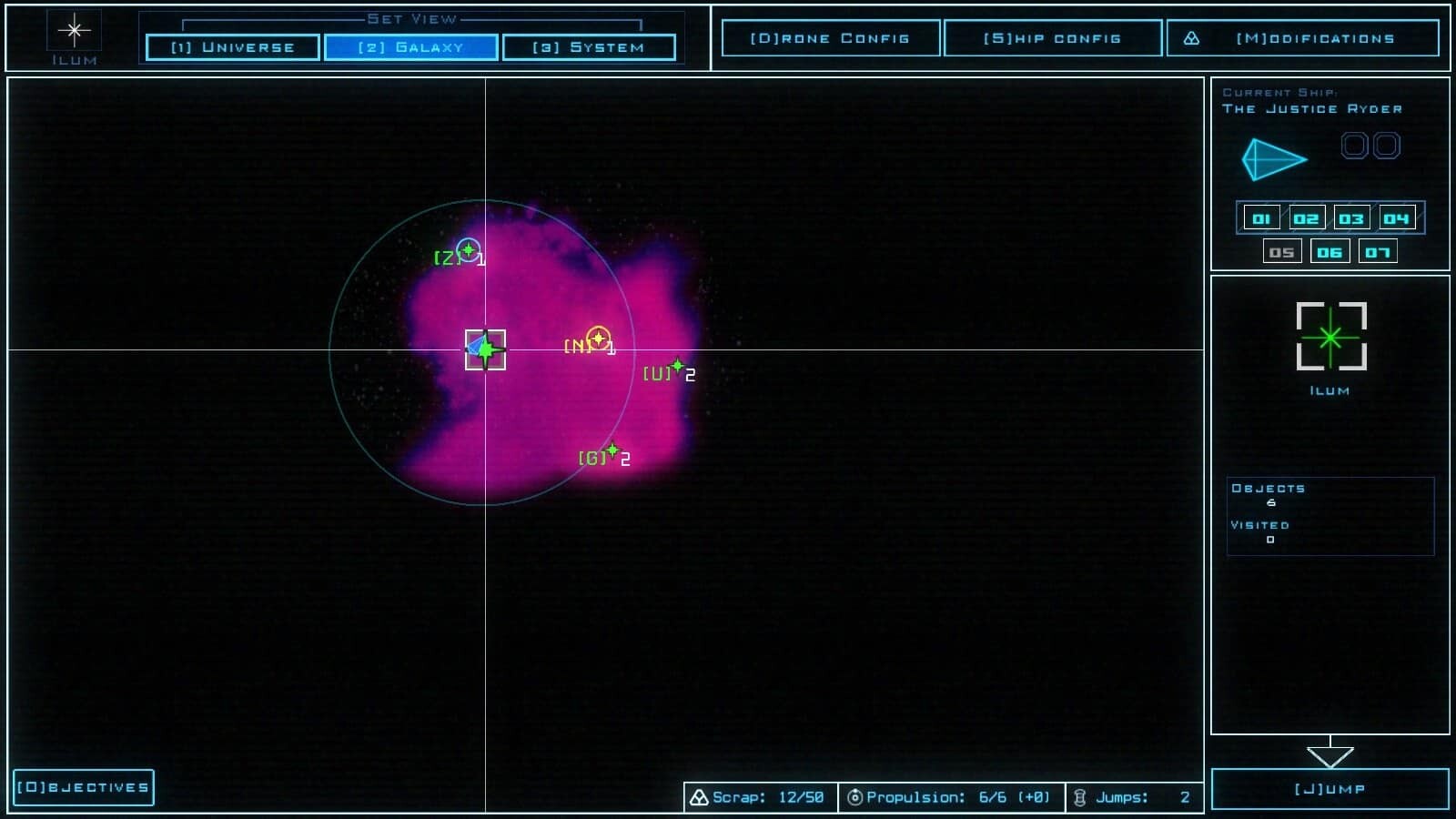 ALONE WITH THE DRONES

Given the obvious dangers of exploring spooky shipwrecks in the interstellar void, you’re equipped with drones – three to start with, but you can find more in derelict ships – to do your dirty work. Each drone is equipped with modules to perform various tasks. Some can tow broken drones or gather fuel. Others can power up sections of the ship, necessary for opening and closing doors and airlocks, and interface with computer terminals. Still others can deploy probes and motion sensors. 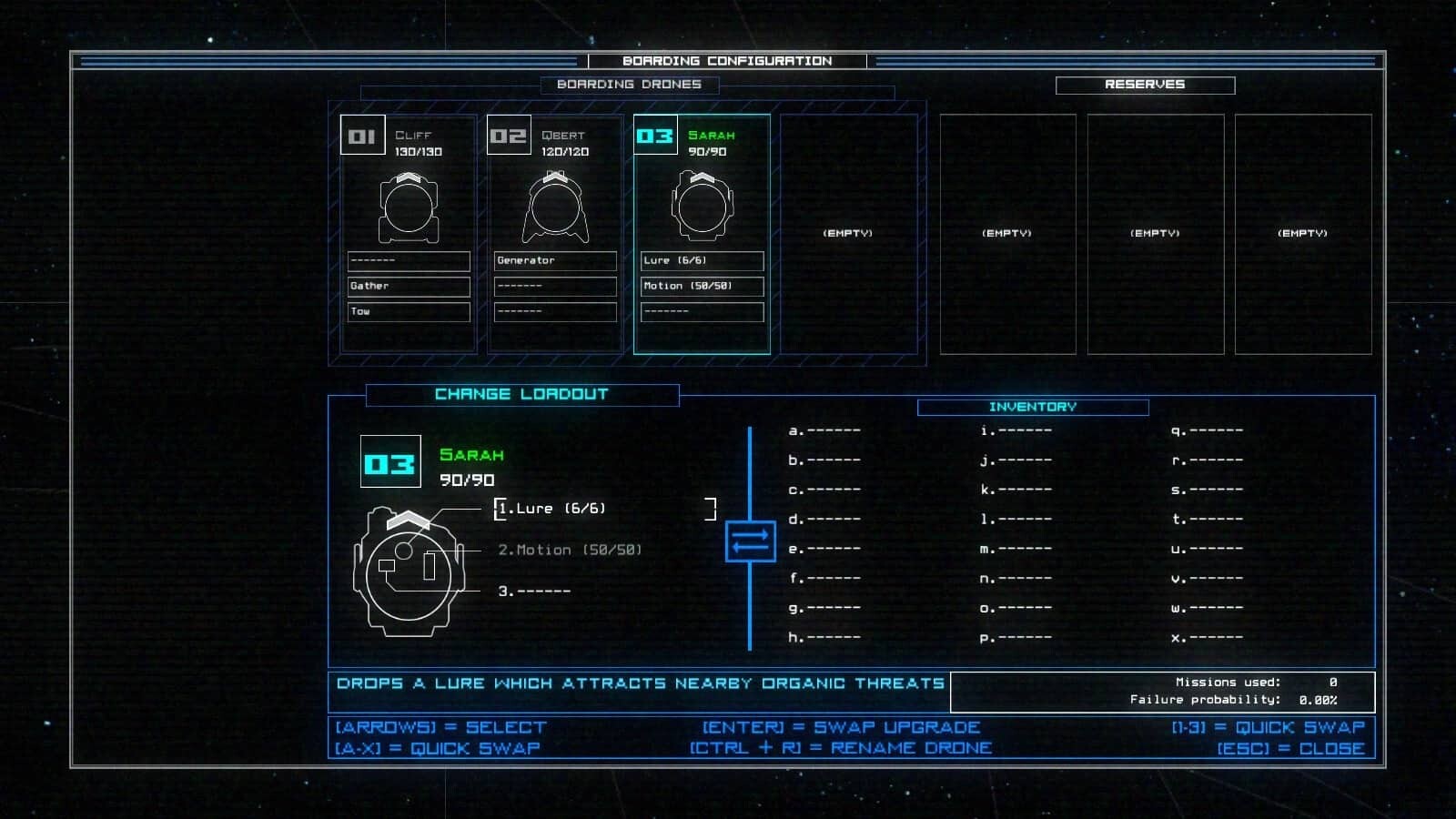 Because these derelict ships might be devoid of human life…but terrible things still stir within them. And most of them will destroy your poor little drones faster than you can type out an “Abort” command on your terminal.

IN SPACE, NO ONE IS LEFT TO SCREAM

And that, more or less, is what makes Duskers such an intense experience. The mood is absolutely perfect. The video feed of your drones, which actually varies between them – a personal favorite being the red-tinged infrared – is full of glitches and static. And if a drone you’re “seeing through” gets attacked, there goes the video feed. 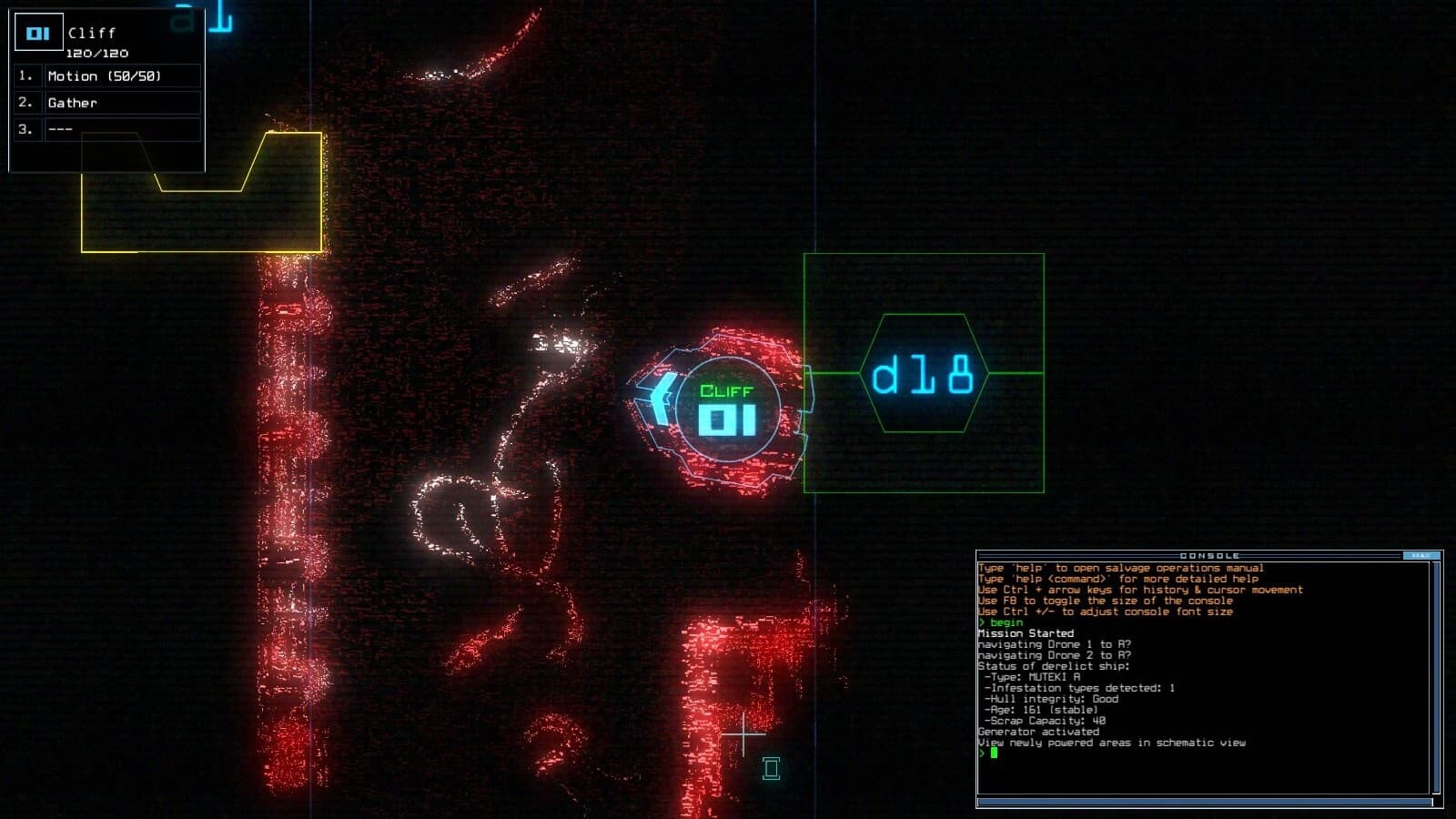 The interface itself is part and parcel of the atmosphere. Consisting of a basic command line interface, it’s easy to pick up. The commands themselves are few enough to easily commit to memory, but you can string them together in creative ways and observe the results from an overhead map view of the ship or station you’re exploring.

It’s even possible to create “Aliases,” which work a bit like macros and can run entire sequences of actions at a single command. The interface goes a long way toward creating Duskers’ intense atmosphere; unlike TIS-100, for example, it made me feel like a programmer without actually forcing me to learn programming. 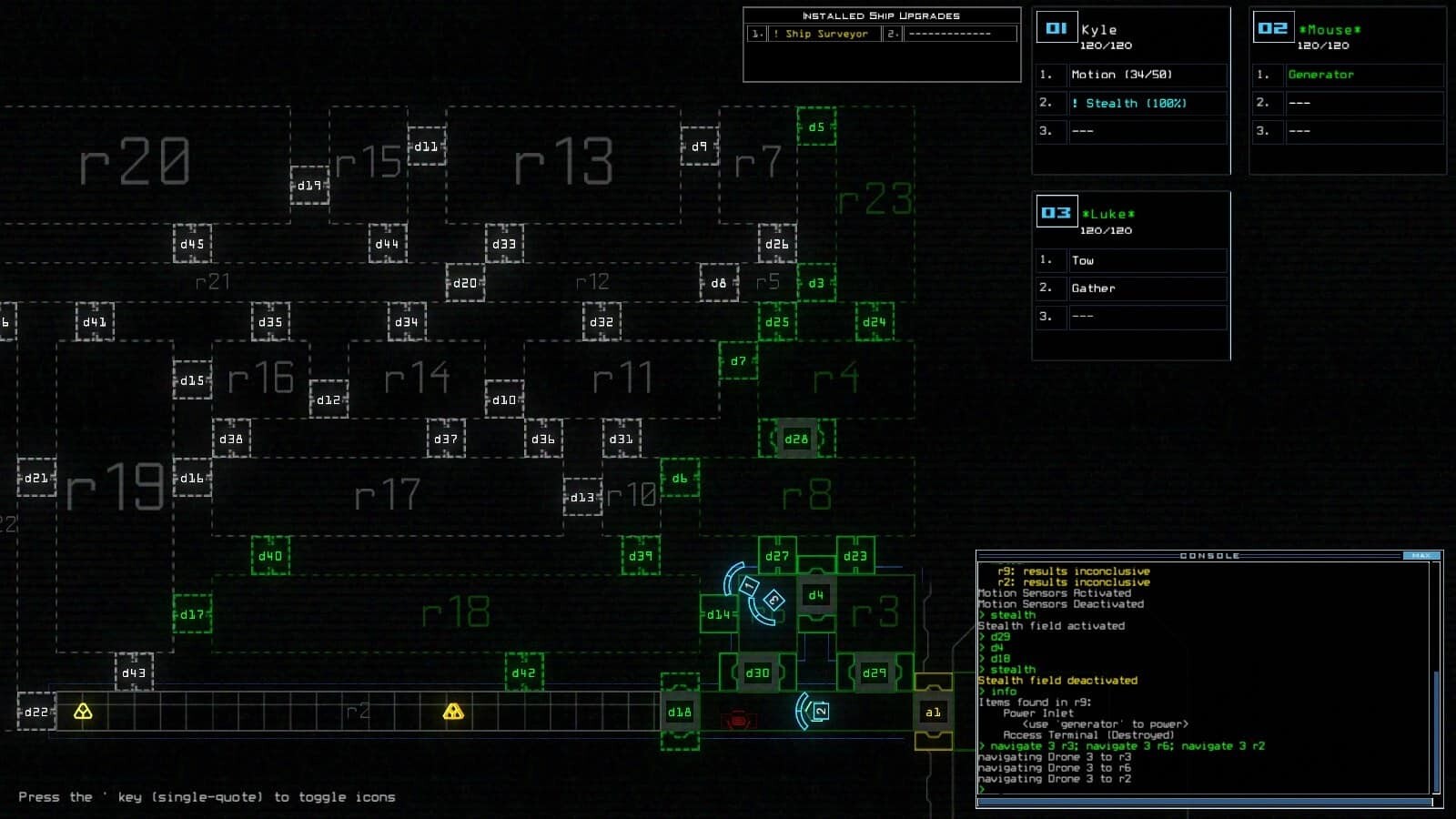 That atmosphere, though, is chilling. More horror than science fiction, less Star Trek and more like the quiet tension of Alien or even the early part of Event Horizon. And even though they’re just remote control cars, more or less, it’s easy to get attached to the drones (the fact that they start out with default names like “Kevin” and “Vinnie” probably doesn’t help). And there’s no soundtrack: just effectively metallic ambient sounds, further creating a sense of claustrophobia that half had me believing I really was doing some sort of outer space archeological survey.

FROM DUSKERS TILL DAWN

Strip away the creeping sense of dread, and Duskers also manages to be innovative in terms of game mechanics. Procedurally generated derelict ships – dungeons by another name – limited resources and perma-death have been done to death, of course, but Duskers emphasizes cautious exploration and environmental puzzles to a degree rarely seen. The various enemies are so dangerous that, while it’s possible to kill them (or take over a ship’s own defenses to do it for you), it’s almost never worth it. 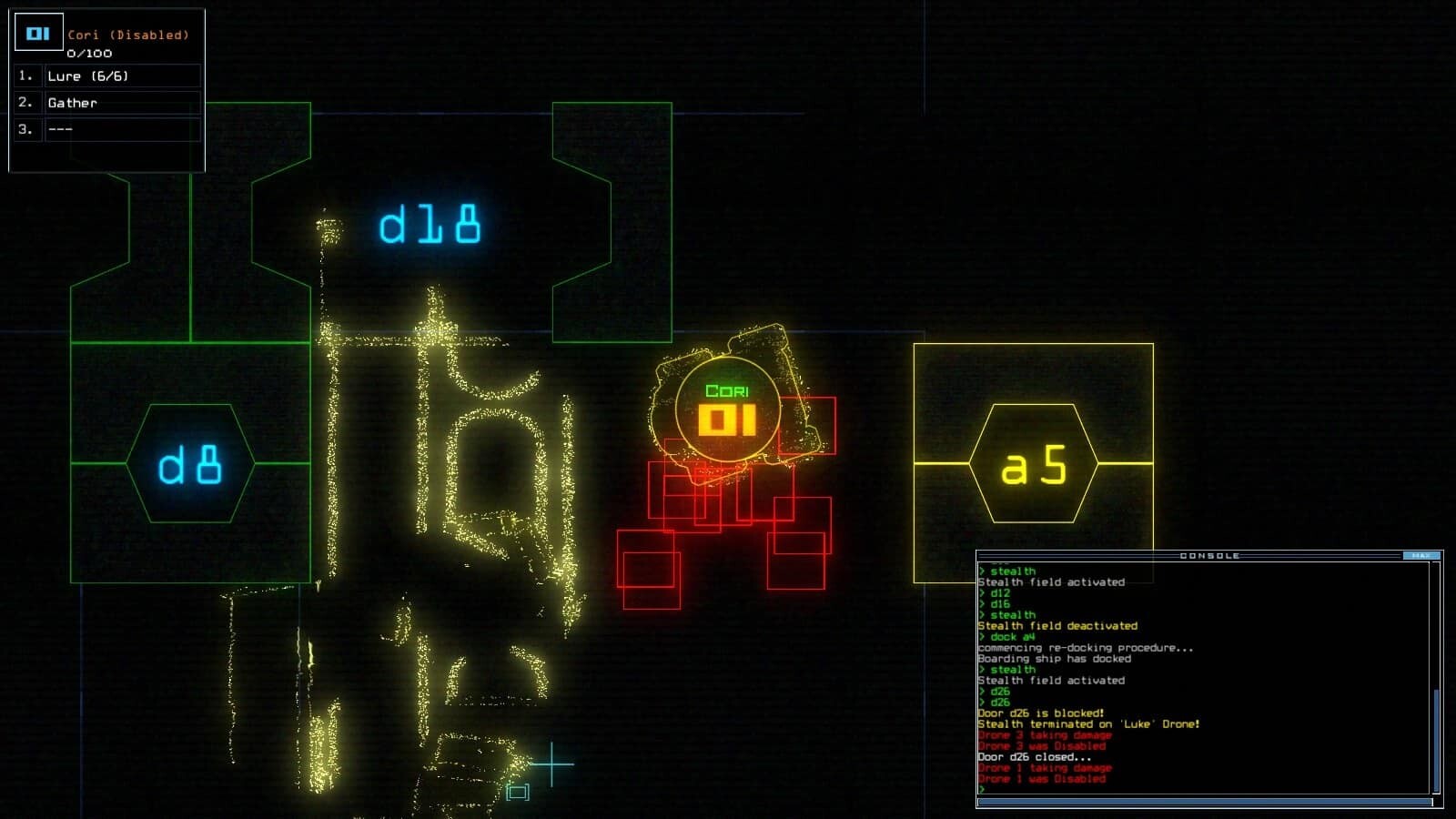 And despite a helpful tutorial that clearly walks first-time players through the easiest way to deal with hostile infestations – a motion scanner that lets you know if adjacent rooms are inhabited – there are no foolproof methods, so you’ll constantly be forced to develop new strategies. Motion scanners are unreliable, probes are vulnerable to hostile attacks, and entropy rules all. Even the best modules and drones will degrade over time, forcing you to gather more and more scrap just to keep things more or less operational.

Make no mistake, Duskers is incredibly difficult. It’s not far-fetched to imagine players initially falling in love with its unique atmosphere of loneliness and dread in deep space, then getting frustrated and quitting in disgust (full confession: this happened to me more than once). It’s worth sticking with, though; it’s challenging as a game and fascinating as an exercise in pessimistic science fiction.

Duskers is available via Steam.

Watch the trailer for Duskers below:

One thought on “Review – Duskers” 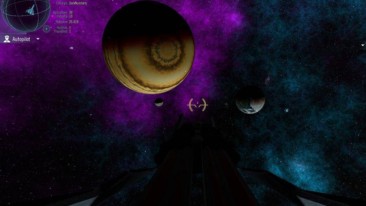 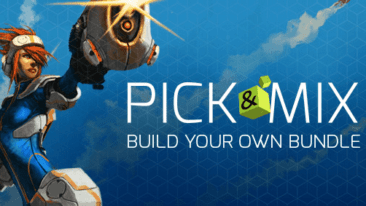