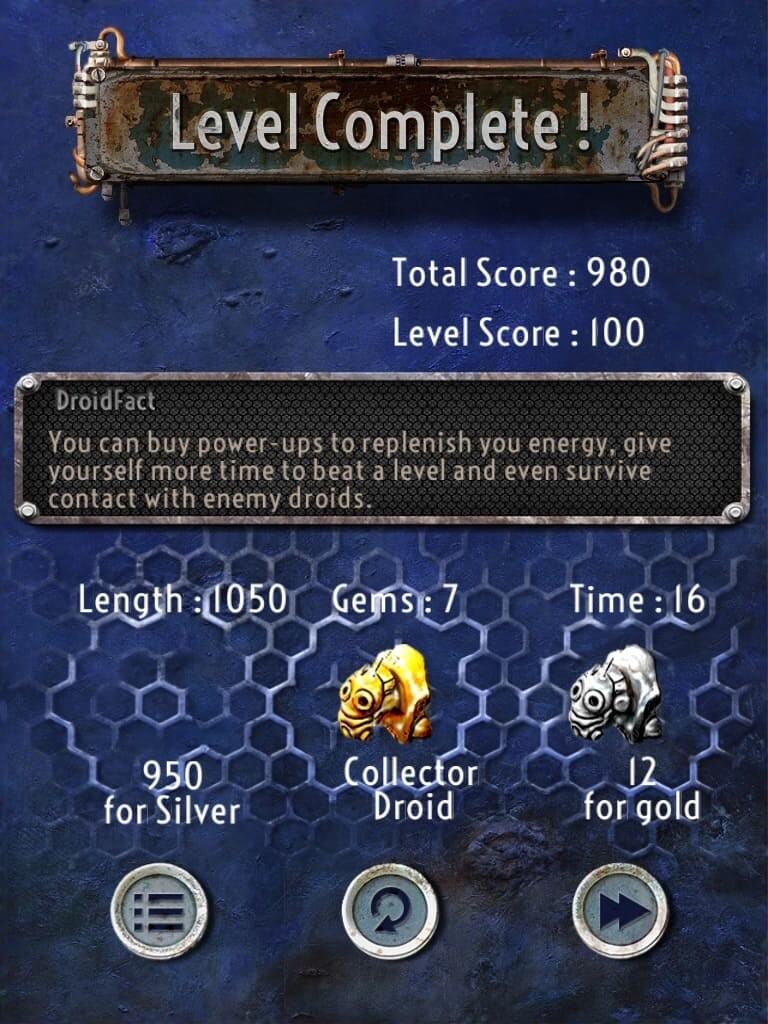 Droidscape is an intriguing new strategy title for iOS that presents a game mechanic that involves setting a path through an obstacle course, and then hitting a playback button that fast-forwards, rewinds or pauses your avatar – a wary little droid named Bishop – as it navigates along the course you locked in so as to avoid the creeps, grab gems and hall-passes and reach the goal before time runs out.

Reminiscent of Jonathan Blow’s Braid, but sufficiently unique to draw our attention and sustain it, the mechanic successfully straddles strategy and puzzle while implementing realtime arcade action in this top down robotic labs themed title.

While the graphics are not retina-crisp, they are clean enough to be viable in the iOS landscape. The collision animations are bit GIF-y, and the edges could use an extra scrub. It turns out the reason the visuals look the way they do, is because they are in fact clay models “painstakingly crafted and animated.” Unfortunately, even on the iPad Mini on which I tested the game, they just look like clunky 3D sprites. Despite the anachronistic 1980’s Japanese RPG soundtrack, the sound design is often laugh-out-loud comedic and helps bring out the developer’s sense of humor. The levity is welcome, because sometimes getting the timing just right when attempting to complete a level can get frustrating. This isn’t a flaw in the game’s design however, but rather a compliment – one can only get angry at oneself for laying out a shoddy path in the first place. The two stages of solving a level are a creative and deceptively simple way of adding several layers of complexity to the proceedings.

The game can only be played in portrait mode, which is a strange choice, particularly because some levels pan and scan. Power ups can be purchased in the Droid store for virtual coins picked up and awarded for completing levels, and the same currency can be used to purchase solutions for levels that prove too daunting. Also, one can purchase more coins with real currency as IAP’s (“in-game app purchases”) which kind of bummed me out – it all seemed so innocent and innovative!

The creeps walk on predetermined paths, and I suppose that due to the nature of the player having to draw their paths in anticipation of their movements, this is necessary, but it would be interesting to see some AI introduced to mix things up a bit and add some variability, as in its current design, it diminishes the game’s replay value.

I think of XCOM: Enemy Unknown wherein restarting a level randomizes the layout or starting position for each of the monsters; some simple randomization for the levels would introduce a far great element of challenge and novelty.

Where’s Your Head At?

There is a strange little picture in the bottom left of the UI that one can toggle, but when I pressed it it revealed only a blank black square with a floating green rectangle that didn’t appear to do much, let alone offer any sort of intuitive understanding of its function. After pressing and holding it, a help tip popped up informing me that this is the way to access Kyttaro’s custom designed HeadTwister technology, and that in proper light I can use my device’s real video camera to control Bishop’s movement by turning my head left and right. Apparently, this is unlocked after a certain level has been completed or threshold has been met. Neat! Strange, but cool.

Quirks aside, I enjoyed my time with Droidscape Basilica. For the price (US$1.99), it is better than many games in the same bracket, and offers a legitimately refreshing concept in contrast to the many clones of clones crowding the market. Sure the game could use some extra polish and further development, and seems like a lot of time was spent on overly ambitious design in too many different areas, but in sum it provides several bold new twists and works well enough to merit a recommendation. 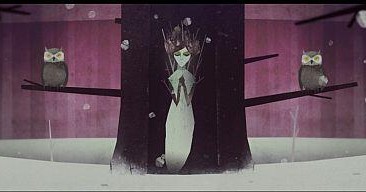