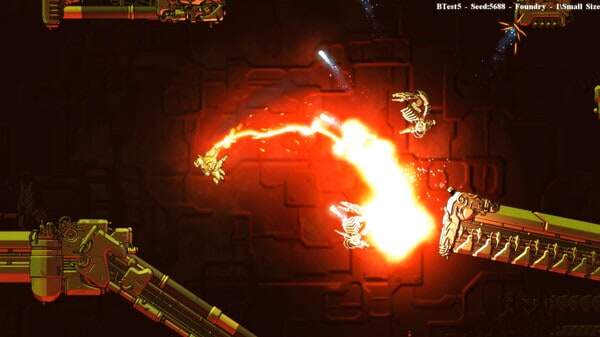 Cryptark – What We Think:

Cryptark from indie developer Alientrap Games is a science fiction-themed Roguelike. Your small mercenary team is contracted to enter and disable the cores of ancient “space-hulks” in order to safely salvage their technology and artifacts.

Disable the Guts Before Before Glory

The game’s action is – in a word – “visceral.” The screen shakes with big explosions while debris tumbles around you after a heated battle. Maybe you shouldn’t have run head-first into this derelict?

Cryptark is a twin-stick shooter where you choose a load-out as you begin each level. Before embarking on your task of disabling the main control computer – which is a giant brain – you can review the ship scans to see what sub-systems there are to destroy, view a map of the entire vessel, test your ordinance before committing to your load-out, and check special requests to earn more cash from your employers.

Your load-out has a price tag attached to it, and if you keep expenses low, you’ll be allowed more chances should you fail on your first attempt. Taking your time and properly preparing will do wonders for your life expectancy, as with any Roguelike, but more so in this case because you get so much more information ahead of time.

It may feel like a twin-stick, and it may even feel like DOOM at times, but if you go nuts treating it as such, the “Rogue” elements will happily slap you down. Exploring the ship, even with a complete map to guide you, should be done as carefully as entering an Alien hive. All the preparation in the world won’t save you from the minions you don’t notice hiding along the walls.

Dialing it back a bit, when you start a new game, you begin by choosing a mech. For a first time player, you’ll only have one choice, as the rest unlock though in-game accomplishments. Each mech has its own starting weapons, passive abilities and permanent bonuses. The hazard mech, for example, is immune to toxic waste, whether it’s within the ships or spewed by one of your own weapons.

When choosing a ship to enter and disable, there will always be at least three special requests on offer, and you can choose to do any these for more cash. These can be self-limiting – i.e. entering the ship with only three hit points or under a load-out cost limit, or leaving one or more of the ship’s subsystems intact.

Raiders of the Cryptark

At times, you’ll see a ship marked as containing an Artifact. Such ships include a fourth special request which will net you points toward unlocking more mechs. These artifact missions can sometimes contradict the other three requests, so you’ll need to choose which rewards you’d rather have.Once inside a derelict, aside from the enemies and subsystems you were sent to destroy, you’ll find Tech nodes that will unlock new weapons for you to use in your next sortie.

The variety of weapons – as you’d expect from any Roguelike – is staggering. Flamethrowers, machine guns, grenades, anime lasers, NUKES…every weapon is balanced between ammo count, cost and capacity for devastation. Each weapon is satisfying; regardless of your tastes for combat, Cryptark has what you like.

Outer Space in Your Face

After spending time in the Campaign mode, unlocking a few new mechs – or if you’re just tired of being limited by load-out costs between missions – you can spin up Rogue Mode. This mode offers no choice of ship to board, no cash limits, nor any special demands to keep certain subsystems active for better rewards. Weapon selection is instead done Halo-style. Across the ship there are weapon deposits that you can pick up to replace one of your current weapons.

Since your guns always have limited ammo, you’ll need to do this every so often, leading you to unexpected ways of dealing damage. Rogue Mode is a breath of fresh air once you want to just get in there and blow stuff up with no worries about restraint!

The art and animation is highly detailed and cel-shaded. Occasional StarFox-style vid screens open up for your crew to tell you important things. Fully voice-acted, they are short but very well done. Everything else is so detailed you forget it’s cel-shaded.

Most of the enemies are skeletal aliens with guns grafted on to them. With all the consistent thematic work gone into establishing these derelicts as ancient mysteries, everything fits into a snug narrative. The ship’s cores represented as brains and the bony enemies both hearken back to games like Contra and Metroid.

Cryptark is top notch. My only issue with it was what seemed to be a bit of a memory leak that caused it to crash after every four or so levels. Though this could have been something on my end as well, it warrants mentioning (hopefully Alientrap will get this taken care of before the game leaves Early Access).

In all other respects, it is a top of the line quality action side-scrolling sci-fi Roguelike worthy of your time.

Cryptark is available via Steam.

Watch the trailer for Cryptark below: 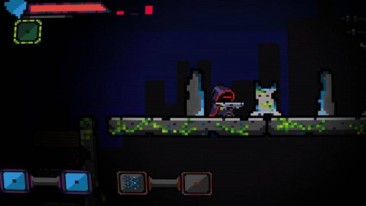 Review – Liveza: Death of the Earth 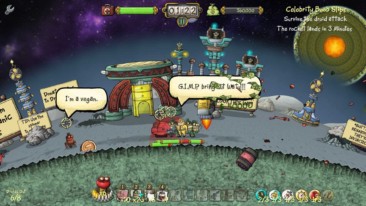