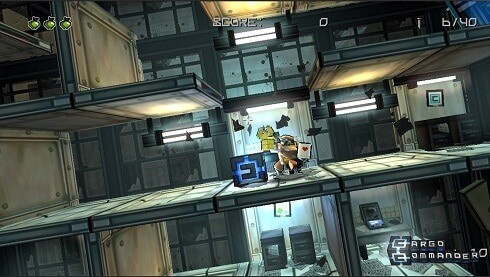 Alone in space, light years away from your family, armed with only your Fistcannon™, Platform Drill and the meanest cup of coffee in the sector; you are Cargo Corps’ latest recruit, a Cargo Commander. Your responsibilities are simple: travel through the vast reaches of wormhole-filled space salvaging priceless cargo from alien infested containers. The work, however, is hard, honest, and hairy: punch and shoot deadly mutants in the face, while traveling between your ship and containers. Jockey for promotions with thousands of other Cargo Commanders in the galaxy, collect over 80 different cargo types, all the while earning your way back home.

Created by the two-man team Serious Brew based in the Netherlands, Cargo Commander has you take on the role of a workaday schmo, toiling away in the cold depths of space, just to make a buck. How you ask? Salvaging cargo, of course! Slip on your safety orange jumpsuit and strap on your multi-tool and get out there! But be warned, savage aliens and black holes fill these quadrants of space. Like the game itself, I’ll try to make this review brief and to the point. Cargo Commander is a relatively straightforward platformer, with a couple of twists. Once you’ve chosen a sector to work in for the day, just throw the switch on the magnetic attractors and wait for a cargo hold to slam into the side of your ship. Climb on board and start looking for loot. Struggles you face will include, alterations in gravity, alien critters, drilling through bulkheads, and, ultimately, trying to get back to your ship before you get sucked into a black hole.

Visually, Cargo Commander looks great, with a cel-shaded 3D style that would fit in beside any AAA game, which makes sense considering the devs’ previous work on the Overlord franchise. Controls are equally well thought-out, with both keyboard + mouse, and dual stick gamepad working wonderfully. Procedurally created levels mean that you’re guaranteed a different experience from game-day to game-day. Not to sound harsh, but what Cargo Commander isn’t is fun for more than 15 minutes at a time. Randomized levels don’t really prevent a sense of repetition in this offering. If I had to make a comparison, I’d say Cargo Commander is the modern day equivalent to Pac-Man. There just isn’t enough difference from sector to sector to sustain interest, nor is there enough variety in enemies or equipment to make up for it.

I like the idea of making a theme out of some tedious task, but the resulting game shouldn’t be equally tedious. There was a time, in the digital stone-age, when a game without a discernible goal could be a huge success (heck, it was the norm), but those days have long passed.

The Check is in the Mail

Well, I won’t be deleting it from my system anytime soon. I can easily see myself firing up Cargo Commander when I’ve got a few minutes to kill. Will those minutes ever add up to hours and hours of gameplay? Probably not.

Cargo Commander is an official entrant in the 2013 IGF competition.

Get Cargo Commando at the Mac App Store

Get Cargo Commando on Steam

Get Cargo Commando on GamersGate 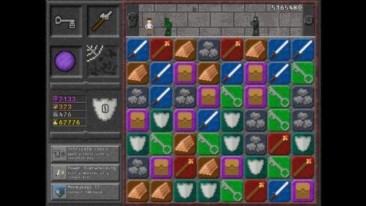