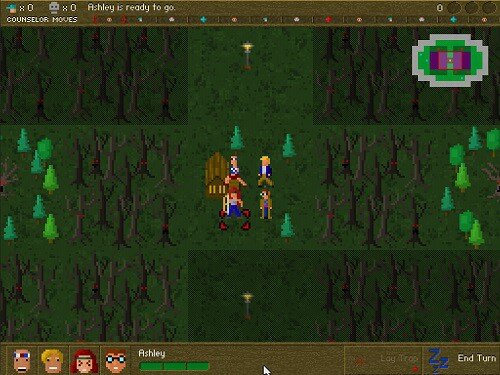 Camp Keepalive – What We Think:

TwofoldSecret’s Camp Keepalive is turn-based tactics game in which overmatched teenage counselors attempt to shepherd delinquent campers to safety while monsters prowl the countryside searching for victims. It’s basically the setup to a bad slasher flick, although that’s where the parallels end.

Unlike its inspirations, Camp Keepalive is not a horror title. It’s instead a loving homage to a much broader genre, touching on everything from Twin Peaks to The Texas Chainsaw Massacre. The sheer variety – as well as the satirical undertones – hews closer to The Cabin in the Woods than Friday the 13th. The Old “Toss ’em in a Wood Chipper” Treatment

The mash-up works splendidly. The straightforward gameplay is compelling enough to keep you hooked, while the on-point parodies combine with a terrific soundtrack and some exemplary (and hilarious) out-of-gameplay writing to add the flavor. The developers have maximized the conceit with 21 distinct scenarios to keep the game fresh, and the result is a streamlined yet deceptively complex survival puzzler.

You control a team of four counselors, moving them around a forest grid collecting campers who have wandered off during the night. The campers move at random unless chaperoned by a counselor, while the monsters enact the behaviors of the horror icons from which they’re drawn. Werewolves hunt campers, Pleathermasks hunt counselors, and everything moves to murderously interrupt any display of teenage hormones.

Heard A Sound in the Cellar. Ignored It

The difference is that unlike more conventional horror victims/protagonists, the counselors at Camp Keepalive know exactly what’s going on. The archetypes normally depicted as weaknesses – jock, nerd, promiscuous daddy’s girl – have been slyly converted into strengths. The jock can run faster to escape danger, while the young couple can manipulate every monster onscreen every time they kiss.

It’s a not-so-subtle inversion of power dynamics in horror. While the monsters are as mindless as ever, the intended victims are highly competent and resourceful, aware of the dangers and their own limitations. The counselors’ various abilities present the player with meaningful gameplay decisions and inherently move a typically fantastical genre closer to something grounded in logic.

That same logic oddly mitigates any terror – the game prioritizes mechanical necessity over aesthetic – but the developers wisely move in the other direction and amplify the humor. It pushes Camp Keepalive towards an idealized vision of teenage selflessness, one that presents diverse characters that the audience can root for rather than the jerks they usually pay to watch get dismembered.

It’s fantastically funny, and it places the game far enough outside genre convention to hint at more original potentialities. For instance, Ashley is the only counselor that can outright kill monsters, making her the de facto queen of the chessboard, while Willow can place baited traps and walk on water. Given the fact that so much horror (and so many video games) depicts the mutilation of female bodies, it’s refreshing to play a game where the two most powerful characters happen to be women.

At the same time, solid gameplay fundamentals prevent the experience from being as subversive as more concise cinematic satires like Tucker and Dale vs. Evil or the aforementioned The Cabin in the Woods. Every level plays out in roughly the same fashion. The in-game humor exists primarily in the form of reference, providing motivation and inspiration without necessarily deconstructing the material from which it’s derived.

Camp Keepalive merely demonstrates that the people most frequently predated in horror films often possess the skills necessary to survive the typical horror scenario. All they have to do is not be complete idiots. A team of individuals – or one omniscient player – acting rationally and in conjunction with one another will not readily succumb to enemies with astonishingly predictable tendencies to violence.

The one major problem – and it’s a big one – is that the game is incredibly buggy. It crashed more often than not, usually towards the endgame when the map gets cluttered and one round necessitates a dozen individual actions. Some of the busier levels are virtually impossible to complete without processing power greater than what my four-year-old Macbook was able to muster.

But while I’ve excoriated games for far less egregious offenses, I’m inclined to be more forgiving of a two-person indie studio than I am of a triple-A studio that actually has a budget for QA. I don’t have enough confidence in my computer to say that the problem is solely on the developer’s end, and the core design is excellent when everything is working as intended.

Making Mothra Out of Mosquitoes?

That’s why the bugs never significantly diminished my enjoyment of the title. The stages break down into readily digestible twenty-minute chunks without any extended continuity or narrative, so diving back in is painless after you’ve been kicked out. When it crashes, the feeling is more akin to getting eaten by the bear in Ski Free rather than a corrupted save file in Skyrim. It’s annoying, but it’s not a catastrophe.

Unfortunately, the glitches are severe enough to warrant a strong word of caution. Don’t buy the game right away. Download the demo and try to figure out whether or not it will play nicely with your toys.

Even then, you could argue that the problems are all in keeping with the broader horror themes. There’s something appropriately masochistic about continuing to play a game knowing you won’t be able to finish, especially given the genre’s predilection for human suffering.

If the game runs well – or if there’s a patch or an update – then Camp Keepalive gets a wholehearted recommendation. It’s a simple, well-executed concept with a killer soundtrack (pun intended) and all of the absorbing appeal of classic diversions like Tetris. It’s a game I’d rather be playing than writing about, and I can’t give much higher praise than that.

Get Camp Keepalive at Desura

One comment on “Review: Camp Keepalive – A Horror Genre Spoof with Killer Instincts” 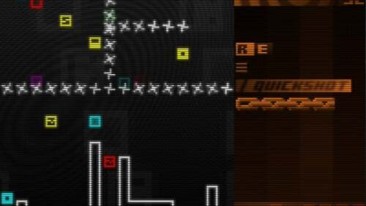 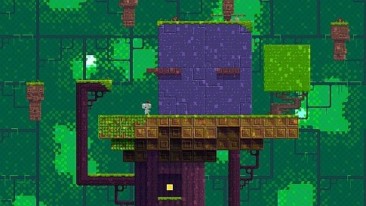