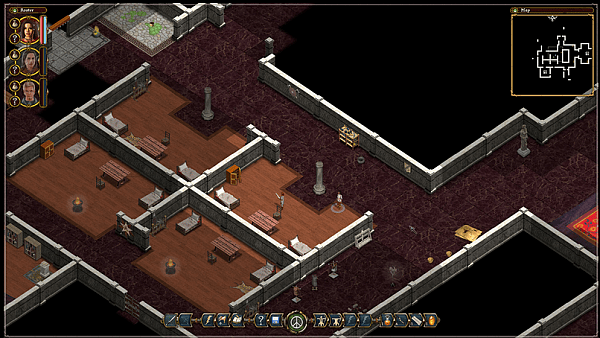 Avadon 2: What We Think

Before RPGs were a spectacular roller-coaster ride of HDR lighting, lens flares, particle emitters and giant space hands bent of the destruction of all life in the universe, there was the humble CRPG that tried to stick more to the feel of a tabletop RPG session that originally inspired them. Like classics Fallout 1 & 2, and Baldur’s Gate, Spiderweb Software continues the isometric epic lineage without apology or nudge-winks with its latest sequel Avadon 2. 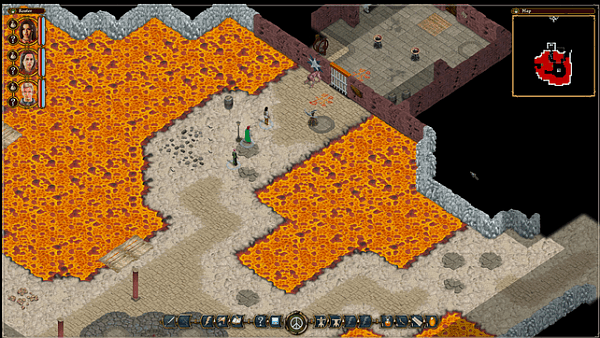 Note that this review is not targeted towards existing fans of Spiderweb’s catalog. I played as a newcomer to their worlds and lore and I am writing for those who have yet to try out their fare. With that said…

Upon beginning Avadon 2, I immediately feel like I’m sitting on the opposite side of the table from a Game Master. Long, painstakingly-written text describes my surroundings, the underlying tone of the environment or the dispositions of my companions. It reads like a fantasy novel; every nuance a character makes, my party members’ reactions…I could easily just sit back and imagine getting just as much enjoyment from the world painted by the words if it were simply a text adventure. The Choice of a New Generation

The game is absolutely massive. I must be honest and say I can do very little to try and experience multiple story lines, see more endings, try different dialogue trees. I simply cannot do the game justice in that I only have so much time in my life. But even with my short time with it, (over a dozen hours) I could see in the world’s plot set-up that you could end up playing a very different game than I would have.

The kingdoms are at war, and you might even end up agreeing with the other side, going turn-coat. The main draw in playing the game, even should you be going in for a second helping, is in the story, the characters, and how your role alters the outcome of events.

Near the beginning of the game I came to a cellar hatch leading to a bandit hideout. My strategies involved placing a bolt turret around each corner and let the bandits come to me. But when I got to the leader, he surprised me with a few tricks. First he opened gates unleashing his pet wolves on me. Then another letting loose more.

Then as my team pounded on him, he drank a haste potion allowing him to attack twice per turn. My party quickly defeated as the wolves and bandit archers were picking away at us the entire time the leader was tanking the hits, and had to reload an old save from quite a while ago (save often!).

When I got back to them again, I went around the back of the hideout and found the wolf pens and disposed of their keepers and each pen individually. Now when the leader called for his archers to pull the lever and open the cages, nothing came out.

Also, this time I took note of the flavor text as the imagined Game Master described a mangy battered wolf that looked like it wanted a piece of its captors and not me, so I freed it and got an extra target to help distract the bad guys. Yes, this is a completely optional area – I’d had just stumbled on it as I was poking about in the forest and decided to investigate, but it speaks to the density of the content on offer.

The UI is simple yet highly functional; each of the character classes can put a few skills into a hotkey bar for easy access during battles so you don’t have to open your skill book every time. Nothing really struck me as confusing or out of place. Equipment encumbrance was easy to gauge, and class limitations are clearly noted.

Even searching the ground for you loot among the many flavor items littering the setting is as easy as popping open your inventory. It may look like something out of the mid 90’s, but it has all the user-friendly trimmings that you could ask for.

Fight for Your Right to Party

Of the 5 classes, you pick one to be the character you control directly, and a character from each other class will join you. You then form a party of 3, leaving the rest at HQ to train, and earn experience points by training. Your party members will passively keep step with your progress so no one will get out-leveled in case you feel like a change of company in is order.

Each class has 3 specializations that are for the most part divided into offensive, general effectiveness, and support. But that, I must confide, is a very basic, sweeping generalization. 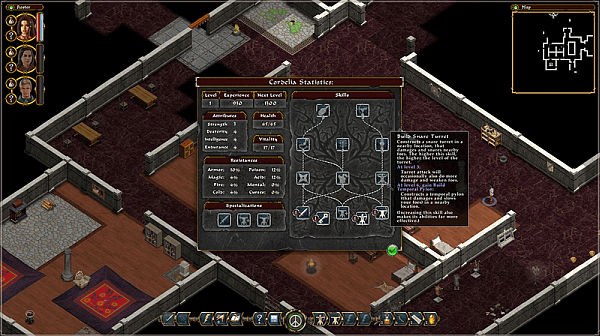 Combat is also fairly simple, but a clever player can make the most of their abilities and exploit the environment for their tactics. Abilities use a cooldown mechanic – after using a skill it can’t be reused until a number of turns have passed. So investing in a couple of decent skills might prove more useful than point-dumping everything into a single skill. Spamming too many skills, however, will wear your party out faster, so it’s a good idea to find a perfect balance.

One thing that felt odd was that during combat all characters in my party would act, then all enemies would. It felt like a seesaw as tougher foes took turns with mine. On the other hand, this made battles a bit more predictable, so I could plan my moves with more certainty, but I was sort of surprised to witness that initiative rolls did not appear to be a factor.

For the Love of Lore

Avadon 2 is not for everyone. The target audience are fans of the previously mentioned CRPGs. If trying something new with a classic feel is something you’d like to try, and you are right at home reading through the Mass Effect codex, then you might find Avadon 2 to be your liking. With everything set up so that even a newcomer to the genre can pick it up quickly, there’s no reason not to see if this could be the beginning of a lovely relationship.

Get Avadon 2: the Corruption on Steam

Get Avadon 2: The Corruption at GOG

Check out IGR’s review of Avernum: Escape from the Pit from Spiderweb Software 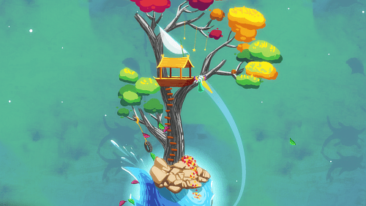